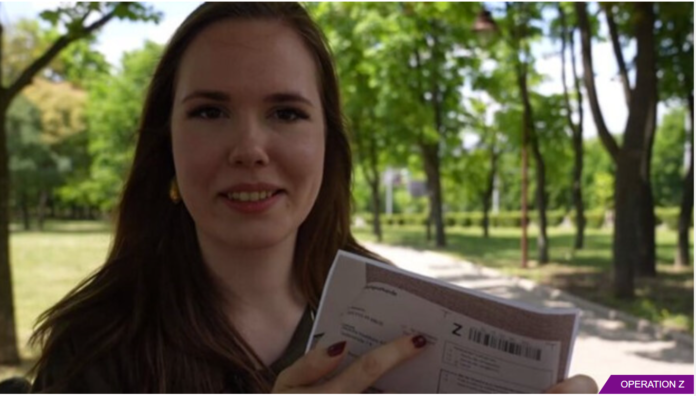 Readovka talked to German journalist Alina Lipp, who became a defendant in a criminal case and found out why she faces three years in prison and what freedom of speech is in democratic Germany

Alina Lipp is a journalist from Germany, the author of the Telegram channel “Neues aus Russland” (“New from Russia”), in which she covers the special operation from the scene, from Donetsk. The information she shares with her subscribers in German and in Russian is significantly different from what is written in foreign media, including German. She transmits first-hand information to her audience – the civilian population in the Donbas has been subjected to genocide by the Ukrainian military for eight years, and the barbaric shelling of residential quarters is not carried out by “Russian aggressors”, but by “victims of a treacherous attack” – Ukrainians.

It would seem that the German media has one opinion, but Alina has another, because this is freedom of speech. But democratic and “honoring human rights” Germany turned out to have a different understanding of this freedom. At first, Alina and her father discovered that their bank accounts were blocked, and recently the girl received an official letter from the prosecutor’s office notifying that a criminal case had been initiated against her.

– So, Alina, what are the charges that you have been charged with?

– I received a letter from the German Prosecutor’s Office. This letter says that a criminal case has been opened against me because I support the Russian special operation. In Germany, a special operation is considered a crime, and a person who supports a crime, according to the law, there is article 140, is given three years in prison for this. Otherwise you have to pay a monetary fine. The letter says that, for example, I say in my Telegram channel that the population of Donbass supports the fact that Russia has launched a special operation. I also said that for several years Ukrainians have been killing civilians in the Donbass, and that this is genocide. And it turns out to be a crime for Germany, so they took 1,600 euro from my bank account and didn’t even tell me about it. I only found out a month later why the money was taken from my account.

– Your father’s account was also blocked. Has he been harassed in any way for being your father?

– No, they just closed my father’s bank account and that’s it.

– In a recent interview, you said that there is actually more freedom in Russia than in Germany. Does your case turn out to be a vivid confirmation of that?

– Of course, and this is not the only such case. Unfortunately, this has been happening in Germany for several years now. I have been doing journalism for several years, and, I would say, for five years they have been closing more and more channels – mostly on YouTube, deleting them or deleting videos. Then, about two years ago, they started closing bank accounts for journalists who simply had a different opinion, different from the state one. And it even got to such an extent that our main journalist from alternative media fled with his family to another country, his bank account was closed. He tried to open a new account in all EU countries, but they all refused him. This means that they have such power, a decree “no, we do not open an account for this person all over Europe.” Therefore, of course, I said that there is more freedom of speech in Russia than in Germany.

– Did this journalist cover the situation in Ukraine or other issues?

– Various questions. He was just critical, telling things that were uncomfortable for the state. He didn’t spread fake information, he had reliable sources, everything was exactly as he said. But this, of course, was simply not convenient for the state. And, of course, when he talked about topics that concerned Russia, it was also uncomfortable for them. Because for about 15 years, I would say, only in a bad way they talked about Russia in Germany, from the word at all.

– That is, the messages about Russia, which were written, let’s say, in the wrong key, overlapped?

– Yes, and there is, for example, one person who wrote for Der Spiegel. In 2014, he started writing more neutrally. Not even pro-Russian, but really neutral about these events in Ukraine. And for this, he was fired and forced to sign a contract under which he cannot write for the next five years or even more, and he is paid for it.

– After your story, it is difficult not to recall the numerous cries of our supposedly liberal citizens that there is a totalitarian Mordor in Russia, and in Europe, in the same Germany, there is democracy, freedom of speech, human rights, and legality. They mostly go there or dream of leaving, they believe that they will find their freedom there. What would you say to people with such views?

– Well, look at my case! I’ve been here in Donbass for six months. I’m just filming what I see. I don’t spread fake information, I interview civilians and translate them into German. And they closed my bank account because of this, closed my father’s bank account and opened a criminal case? They’ll imprison me in Germany for three years. Where is freedom of speech here? No, it’s simple.

It should be said that such a “stab in the back” from Germany did not affect Alina’s desire to continue to adhere to objectivity and tell what is really happening in the Donbass. She continues to work in Donetsk, which is being shelled daily by the Ukrainian Armed Forces, communicates with local residents actively – the feed of her channel, which has more than 175 thousand subscribers, is regularly updated with new posts, which tells about the situation not only in the frontline zone, but also in Europe in two languages.

If “democratic” Germany wanted in such a way, by opening a criminal case and actually stealing her bank savings, to intimidate the girl and make her silent, then they failed. Alina does not lose her spirit and, without lying, admits that she likes it even more here in the Donbass, even in conditions of constant danger, than in Germany.

Previously, Readovka took an interview from an Italian blogger who has been living in Donetsk since 2015.