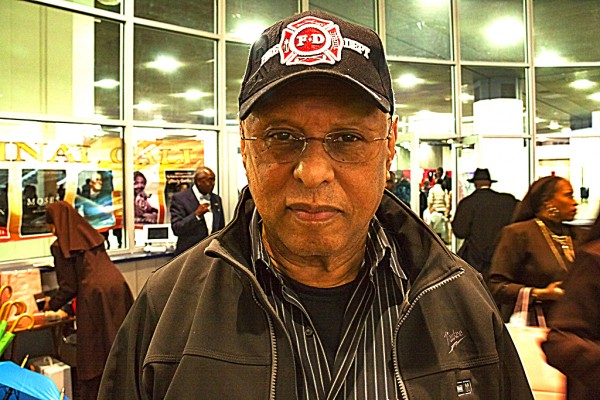 I’m Lian Macary with Infowar.com reporting here from Times Square. I am standing next to Rudy Dent. He’s a thirty two year veteran of the New York City Fire Department. He’s worked as well with the New York City Police Department. And you retired right after 9/11. He was there on 9/11. He saw the World Trade Center Towers seven come down. Rudy, tell us about what happened that day.

Well, I was off that day and I got I received a call at home and I got to see both buildings come down on TV. I jumped on my motorcycle. I did about 120 miles an hour across the Tappan Zee. I reported to my firehouse and then I got my gear. A bunch of us got together. We commandeered a mail truck and we made our way down to the to the site. At that time, we’re building seven was still up.

I saw a building seven come down. Oh, my fellow firefighters who were there, they did that involuntary jerk, When a loud explosion goes off, you know, you you can’t help it. And they did. I’m a Vietnam veteran, too, so I kind of didn’t jump like they did. But it was there was an explosion. The building did come down in complete classical controlled demolition. It came down on its own footprint. There’s no question about that.

As a matter of fact, Richard Gage from Architects and Engineers has completely handled that from his area of expertise.

OK, now we heard rumblings, things that the fire department was saying that they were overhearing Larry Silverstein talking about talking to his insurance company of whether or not he should have the building pulled. In your professional opinion, was the building pulled?

Well, let me say this in the New York City Fire Department, I as I said, I had 32 years there. I was a chauffeur and I was also a trained fire marshal. A fire marshal is considered an expert witness in court. He’s like a forensic detective. He has the power to administer the oath, take testimony and issue a subpoena. That’s a lot of power. And he’s he’s a highly trained investigative person in his area of expertise in arson.

And we have no term that I know of that says pulling buildings. That’s not our area of expertise. We’ve never done that. We don’t do that. So for him to say that I don’t know where he pulled that out of, but it’s just not part of our operations, OK, right, so the fire department doesn’t have the training to pull a building to demo a building like that, we’re not trained to do that. We’ve never done that in my 32 years.

I know of no evolution whatsoever that does that. And then talk to me a little bit. Obviously, as a professional in the fire department for 30 plus years, they’re saying that blaming it on the office fire is just a few office fires. Well, if it wasn’t so serious a situation, that would be completely laughable, that is ridiculous. First of all, our guys were up there. They were calling for additional hand lines to mop up the isolated pockets of fire.

And let me just explain one thing. Never in the history of the world, never in the history of high rise skyscrapers, has ever a skyscraper ever come down because of fire. And I’m talking massive fire. And you know the reason why? Because fire does not burn by itself hot enough to compromise and melt steel. What we had in the World Trade Center and I saw myself was molten lava like pockets of molten steel. All right. I spent the night on the pile searching for bodies, and I saw that with my own eyes.

So who are you going to believe? Are you going to believe a bunch of government bureaucrats or my fellow brothers, which I lost 343 guys that day, and I lost Tommy Hagan, Bruce Van Hines and Kenny Campbell. And I can never forget that. I think of that before I go to bed. I think about it the first thing in the morning when I wake up and it’s in honor of them and their family. But I will continue to do everything I can to make the rest of the world wake up to the fact that this was a false flag operation.

Right. And now as you’re as you’re out there with with professionals who understand what it is that they’re seeing, what were you all saying to each other when you’re looking at this molten lava? Well, we were overcome with grief, first of all, we lost 343 guys, we didn’t we weren’t talking about that. If you if you look at the numerous media videos, you’ll see the guys bent over incredible grief. One of the things that we have in the fire department is an incredible brotherhood.

We do what we do, an aggressive interior attack because we believe in each other. We know that our guys will pull us out if we get into trouble. And if we lose somebody, it’s it’s we’re we’re family. We’re we’re very close. We know each other’s families. We know each other’s children. And one of the things that I’d been privy to is, you know, I’m proud of is that I see the New York City Fire Department is a calling.

It brings out the best in guys, you know, I mean, in men who put their lives on the line to save other people’s lives. New York City Fire Department is probably the least integrated of all the services. Right. When I first came into the firehouse, it was all heavy brogues and stuff. But those same guys, I’ve seen them bent over giving mouth to mouth to little black children that they’ve just pulled out of a building. And typically when you die or when you cease to to to start to breathe, you throw up.

And they they gave them mouth to mouth. You know, I’ve seen incredible acts of heroism. I love my fellow firefighters. We love each other. And I’m dedicated to exposing this false flag that took their lives.

What are your what are your comrades say to you, what do you what do people say to you? Because we’ve we’ve tried to talk to some people and of course, you know, they have to worry about their pension and things like that.

They cannot comment. And I’m retired. But while I was on, I was approached by the news and I I deferred from commenting for two reasons. First of all, I I was at 1993, the first bombing, and I saw that I stood shoulder to shoulder with the FBI while they forage for little paint chips. And we’d be a forensic science. They can take that pain, check a chip and tell you the make and model of the vehicle that it belonged to.

All right. And and I and that was a bombing. This was a bombing. What did you think about them taking all of the debris away so quickly? That was a crime in and of itself, because the classical thing that any investigator is taught is protect the crime scene.

And Nyst and the 9/11 Commission lied to the public. I mean, you cannot be that stupid. You cannot be that stupid in law. As a former police officer, every crime or offense has a degree of mental culpability. If you knowingly, intentionally, recklessly or negligently committed the act. And the mere fact that there were obviously are the definition of a conspiracy is when two or more people acting in concert knowingly commit an offense or or a crime. All right.

A misdemeanor or a felony. An offense. That is the definition of a conspiracy. Was this a conspiracy? Absolutely. Yes, it was. And those people need to go to jail for treason. Is there anything else that you want to say to anyone out there or anyone who might be wanting to come forward, but they’re scared? I want to thank you, because you are all we have Infowars, right? An independent press to try to get the word out to the public because the public is mesmerized by the mainstream media.

And let me give you my opinion of the mainstream media. The mainstream media is their mission is is to act as the most effective weapon of mass deception and public manipulation the world has ever seen. And if you don’t think that so, ask anyone any taboo question that the mainstream media frowns upon with its army of trusted celebrity prostitutes. All right. We’ve seen and and you will see a sadly predictable, knee jerk reactionary response from the public, because that’s what they’ve been trained to believe and trust in.

I think times are telling because as you know, my name is Rudy Det I did an interview with Ludawvsky and that interview got over 51000 views and still climbing it got over 15 hundred likes and it only got 32 insults. All right, the people, they’re ready for the truth and they can think you know 13 years people are gonna forget we will never forget, we remember, you remember, remember this, the funding problems were up against in possible odds, they were up against King George, the third, upon whose holdings the son never said, they were only four percent, and, look what happened! Absolutly, America, Yep!

Thank you so much! Well, Lian Maccary reporting from Time’s Square and there you have it, the poeple are ready for truth, does not matter how many of these anniversaries go by, the truth will reveal itself in due time.