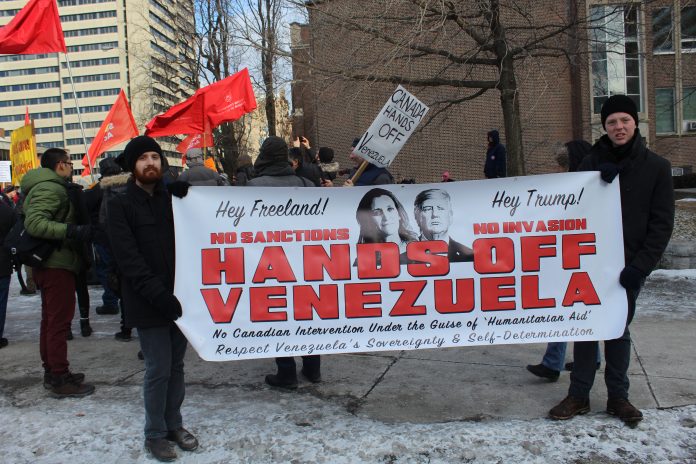 The United States and Canada have plenty of reasons to be afraid of the (oil rich) Bolivarian Republic of Venezuela, so they are doing their utmost to address their perceived problem.

The US, in particular, fears that Venezuela’s social democracy will set a dangerous precedent, and that, if allowed, other countries will follow suit. They also fear the status quo, wherein they are denied control over Venezuela’s oil reserves (the world’s largest).

The Bolivarian revolution itself, initiated by late president Hugo Chavez in 1998 and continuing with president Nicolas Maduro, is emblematic of the US’ s “problem”, even as the legitimacy of the revolution is beyond dispute:

Chavez, who died of cancer on Tuesday, March 5, 2013, won 18 of 19 contested elections in a country whose electoral system was described by former US president Jimmy Carter as “the best in the world”.

An icon of the Bolivarian revolution, hundreds of thousands of Venezuelans mourned the loss of their leader at his funeral.

Though Maduro, Chavez’s successor, isn’t as popular, he still managed to win two national elections within the last year, including 76 per cent of mayoralties two months ago.

Corporate media, a core agency of western propaganda, has demonizedChavez for years, and continues to ignore or minimize the matrix of converging impulses that make the Bolivarian revolution an on-going success, so a list of the revolution’s stellar accomplishments will surprise many people who live in North America.

Some of the Bolivarian Revolution’s accomplishments are listed below:

-Access to quality education (at all levels) is guaranteed for all

Unfortunately though, the U.S. is notoriously persistent, and quite expert in the arts and sciences of illegal regime change. Consequently, they are engaging in destructive, anti-democratic efforts to unseat the Maduro government, by employing “soft coup” strategies — for the benefit of the U.S, and the Venezuelan “elites”.

The CIA, in partnership with local elites/oligarchs, is orchestrating the coup, as they most recently did in Honduras, and as they have done for decades throughout the world.

The objective of coups is to create destabilization in the target country which creates popular discontent, a precursor to illegal regime change. Tacticsemployed include these:

Economic destabilization occurs when foodstuffs are hoarded, burned, or sent out of the country, as is currently happening. It also occurs when capital leaves the country (i.e the wealthy move their monies to other countries), when prices are falsely inflated, and when the power grid is disrupted.

Media is manipulated when peaceful protestors are depicted as being violent (through the use of misleading videos or doctored photos), when the number of opposition protestors is mischaracterized as being larger than it is, or in a myriad of other ways in which media messaging communicates false perceptions, as it does everywhere.

Opposition protests are always violent (in keeping with the coup formula), they have starting and ending times, and they occur in the wealthier areas, (because they do not have the support of the less affluent). Likewise, opposition protestors, sometimes armed, barricade streets, and occupy public spaces.

All of the destabilization tactics are designed to convey the impression that the government is incompetent, and that it needs to be changed. Ultimately, though, widespread support is needed, and in this respect, the opposition — though well-funded by the U.S. — has so far failed.

If the coup does succeed, it will be another victory for graft and corruption over democracy and the rule of law.

Video: Ready for Nuclear Holocaust with Russia Over Ukraine?/ By Rep...