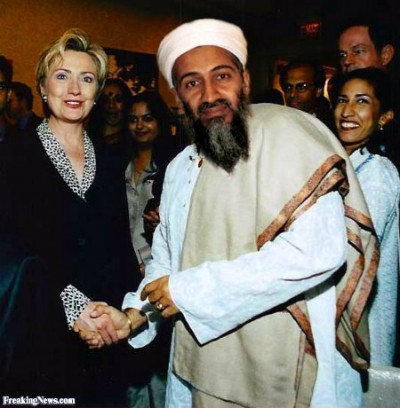 Al Qaeda is a fan of the Clintons who have supported them for more than twenty years. And before that, Brzezinski and Kissinger supported them.

Al Qaeda rebels, ISIS-Daesh, are unbending supporters of Hillary, because when she becomes President of the United States, « she’ll continue to support us, give us money and weapons, … «

« We’re voting for you, Hillary, on November 8. We’ll cast our absentee ballots from more than twenty countries where the CIA is helping us. »

« We’re not terrorists, we’re the « Moderate Good Guys ». We’re supported by Hillary Clinton, and Hillary is not a terrorist. »

“And great, let them come from Saudi Arabia and other countries, importing their Wahabi brand of Islam so that we can go beat the Soviet Union.”  (Hillary Clinton)

And before Hillary, it was Brzezinski who was supporting Al Qaeda on behalf of the US Government…

In the wake of the Cold War (during Bill Clinton’s Administration) Osama bin Laden was said to have abandoned the jihad. He was portrayed as a “Peace Warrior”, a Saudi Businessman involved in humanitarian undertakings.

The byline of this 1993 photograph of Osama bin Laden,

describes Bin Laden as an “anti-Soviet warrior”  “on the road to peace”.

“Helped Turn Bosnia into a Militant Islamic Base” according to a Republican Policy Committee Congressional Report.

At the height of the war in Bosnia, Bill Clinton and Osama bin Laden joined hands in recruiting Al Qaeda mercenaries and channelling weapons to the « jihadists » :

« The Clinton Administration’s “hands-on” involvement with the Islamic network’s arms pipeline... [involved] The Third World Relief Agency (TWRA), a Sudan-based, phoney humanitarian organization … [which] has been a major link in the arms pipeline to Bosnia. …

TWRA is believed to be connected with such fixtures of the Islamic terror network as Sheik Omar Abdel Rahman (the convicted mastermind behind the 1993 World Trade Center bombing) and Osama Bin Laden, a wealthy Saudi émigré believed to bankroll numerous militant groups.

(The original document was on the website of the US Senate Republican Policy Committee (Senator Larry Craig),

Mujahideen mercenaries from the Middle East and Central Asia were recruited to fight in the ranks of the Kosovo Liberation Army (KLA) in 1998-99, largely supporting NATO’s war effort against Yugoslavia.

According to Ralf Mutschke of Interpol’s Criminal Intelligence division also in a testimony to the House Judicial Committee:

The State Department [under Bill Clinton] listed the KLA as a terrorist organization, indicating that it was financing its operations with money from the international heroin trade and loans from Islamic countries and individuals, among them allegedly Usama bin Laden » [leader of Al Qaeda].  (US Congress, Testimony of Ralf Mutschke of Interpol’s Criminal Intelligence Division, to the House Judicial Committee, 13 December 2000)

This did not prevent Clinton era secretary of state Madeleine Albright from Hugging Hashim Thaci, leader of the KLA (linked to the Mafia, on the Interpol list).

5. Secretary of State Hillary « Changed Sides in the War on Terrorism »: Weapons for her Al Qaeda friends

« The State Department under the management of Secretary of State Hillary Clinton “changed sides in the war on terror” in 2011 by implementing a policy of facilitating the delivery of weapons to the al-Qaida-dominated rebel militias in Libya attempting to oust Moammar Gadhafi from power, the Citizens Commission on Benghazi concluded in its interim report. (Jerome Corsi, Global Research, January 2015)

Libyan officials were deeply concerned in 2011, as Secretary of State Hillary Rodham Clinton was trying to remove Moammar Gadhafi from power, that weapons were being funneled to NATO-backed rebels with ties to al Qaeda, fearing that well-armed insurgents could create a safe haven for terrorists, according to secret intelligence reports obtained by The Washington Times.

6. Because Al Qaeda is on the US « Terror List », Doesn’t Mean We Shouldn’t Support Them…

US Secretary of State Hillary Clinton acknowledged that Al Qaeda and other organizations on the US “terror list” are supporting the Syrian opposition.

“We have a very dangerous set of actors in the region, al-Qaida [sic], Hamas, and those who are on our terrorist list, to be sure, supporting – claiming to support the opposition [in Syria].” [1] Transcript of Clinton interview on BBC, 26 February, 2012:   (Click here to watch video)

In the above 2014 Report of the US State Department, the following al Qaeda affiliated terrorist organization (among many others) are included.

The State Department Report can be consulted online.

7. Al Qaeda are « Moderates »: More Money for the « Moderate Terrorists »

Clinton Pledges $45 Million in Aid to Al Qaeda in Syria:

[Former] US Secretary of State Hillary Clinton announced that the US would be providing an additional $45 million in “non-lethal aid” to the “opposition” in Syria, reported the Associated Press. Who’s the opposition?

« In fact, Assange notes that the former Secretary of State was fully aware of the United States’ involvement in arming [Al Qaeda affiliated Libya Islamic fighting Group] rebels in Libya in a bid to help them overtake Qaddafi. Ultimately, it is alleged that those same weapons then made their way to the Islamic State in Syria. »

More than 100 pages of previously classified Department of Defense and Department of State documents implicate the Obama administration in a cover-up to obscure the role Hillary Clinton and the State Department played in the rise of ISIS. (Global Research, June 2015)

10. Money for the Clinton Foundation Thanks to Al Qaeda

“Donors in Saudi Arabia constitute the most significant source of funding to Sunni terrorist groups worldwide.”

Hillary Clinton is now on record saying Saudi Arabia and Qatar fund and support ISIS. So what did she do about it? She took their money, and sent them arms. Mainstream media won’t touch this with a 10-foot pole.

WikiLeaks have released an email in which Hillary Clinton admits that Qatar and Saudi Arabia – two of her mega-donors – provide financial and logistical support to ISIS.

In the extraordinary email, sent to John Podesta in 2014, Clinton lays out an eight point plan to defeat ISIS in Iraq, and mentions that Saudi Arabia and Qatar are both giving financial and logistical support to the Islamic State and other extremist Sunni groups.

« Hillary conveniently fails to mention that these two terror-funding states are both mega-donors to the Clinton Foundation.

Qatar has given between $1 million and $5 million to the Clinton Foundation and Saudi Arabia has donated upwards of $25 million dollars to the Foundation.

Nowhere in the email – sent, of course, through the notorious unsecured server – does Clinton address the staggering hypocrisy of continuing to provide Saudi Arabia with multiple billions in weapons, arms, aircraft, and other support in full knowledge of its active support for terrorists.(Baxter Dmitry, Global Research,  October 27, 2016)

From the horse’s mouth: “The new offensive was a strong sign that rebel groups vetted by the United States were continuing their tactical alliances with groups linked to Al Qaeda, » (New York Times, October 29, 2016)

Al Qaeda, ISIS-ISIL-Deash, Al Nusra et al  are the foot soldiers  of the Western military alliance. Their unspoken mandate is to wreck havoc and destruction in Syria and Iraq, acting on behalf of their US sponsors.

Al Qaeda is not only supported by Hillary, Senator John McCain has met up with terrorist leaders while on a flash « business trip » to Syria. (see picture right)

12. P.S. Many « Left Progressives » are Voting for Hillary. » The Nuclear Option is on the Table » and so is Al Qaeda

« The leading lights of the so-called « progressive » movement argue that it is the left’s duty to vote for this neocon warmonger. But the consequences of this strategy may well lead directly to nuclear war.

Hillary Clinton constitutes an existential threat against all of humanity. »

Author’s Note: The purpose of this article is « Counter-propaganda », namely to break the lies and fabrications of the corporate media. To reveal the truth concerning Hillary and US foreign policy. « The Global War on Terrorism » is bogus.

Writing from Canada, the purpose is to inform, it is not to take sides in relation to the forthcoming US presidential election. That is for US citizens to decide upon.

This is a review of America’s « War on Terrorism » which is intent upon revealing Washington’s diabolical role as a « state sponsor of terrorism » and the use of terrorist entities as a means to destabilizing and destroying sovereign countries.

Hillary Clinton has played a central role in supporting and financing the Al Qaeda affiliated terrorists.

The twelve reasons presented in the article are carefully documented. They constitute a point by point summary. The purpose is to inform public opinion. Nothing more.

We nonetheless ask you to read carefully and draw your own conclusions. We call upon our readers to forward this article far and wide.

There is of course a vast literature behind these twelve points, which readers may which to consult.

Archive on US elections

Archive on The Global War on Terrorism

Archive on Media Disinformation and Propaganda

Global Research will be initiating a Counter-Propaganda campaign. If you wish to support this endeavor, consider making a donation and/or becoming a Member of Global Research.

America’s hegemonic project in the post 9/11 era is the “Globalization of War” whereby the U.S.-NATO military machine —coupled with covert intelligence operations, economic sanctions and the thrust of “regime change”— is deployed in all major regions of the world. The threat of pre-emptive nuclear war is also used to black-mail countries into submission.

This “Long War against Humanity” is carried out at the height of the most serious economic crisis in modern history.

It is intimately related to a process of global financial restructuring, which has resulted in the collapse of national economies and the impoverishment of large sectors of the World population.

The ultimate objective is World conquest under the cloak of “human rights” and “Western democracy”.

The Globalization of War: America’s « Long War » against Humanity