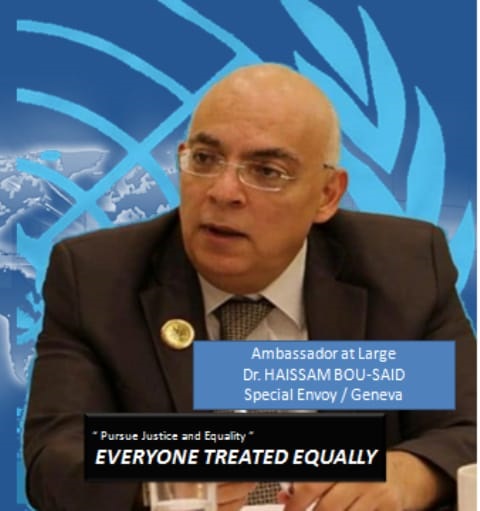 Commissioner of the International Human Rights Commission (IHRC) in the Middle East, Ambassador Haissam Bou Said has argued that Israel sits on the throne of violations and there are allied and non-allied superpower countries that place political obstacles to opening up to international committees.

His remarks to Syria Times e-newspaper came one day before more than 20 phosphorous bombs were fired by the Israeli occupation forces on Lebanese territories in the area between Houla and Mais Al-Jabal towns.

Israel’s recent violation of the law of war is not surprising as this entity breaches human rights through its acts against unarmed people in the occupied Palestine and the Syrian Golan.

But the question that we can pose here is what is the mechanism to stop violations being perpetrated not only by the Israeli entity but also by the Turkish and US occupations forces that exist in Syria.

According to the Ambassador Bou Said, for every case there is a mechanism at work for the International Human Rights Commission and also the Council, especially those countries whose history witnesses egregious violations. Among those countries on the throne of violations is “Israel”.

“We were able to take it to the Universal Periodic Review (UPR) and from there to the International Criminal Court (ICC) despite international and American pressure on us,” he added.

The ambassador made it clear that they have worked day and night to put Israel on trial for committing crimes against the Palestinians in Gaza and other Palestinian cities.

“As for the issue of the occupied Golan, there is a difference in the legal form, and this puts us in a different framework to approach the situation in the Golan…We have submitted numerous reports about what the Israeli entity is doing in the Golan and the pressure it exerts on the Druze of Syria in this class in order to impose the Israeli identity, and refusing to take it is within the freedom of the individual and personal right, as  the Israeli officials do not understand not want to hear the voice of humanity.

Moreover, the ambassador pointed out that he held in 2015 meetings with Syrian officials –Speaker of the Parliament and Justice Minister- and they put together a judicial and legal plan to hold Turkey accountable for all its crimes, but they clashed with some local parties and entered into an administrative routine that made the issue in need of formal decisions and approvals.

“There is a difficult administrative routine that is difficult for us to understand, especially in humanitarian and health affairs, in addition to a local and international political framework.. There are allied and non-allied superpower countries that place political obstacles to opening up to international committees, and this is also something we do not understand. Therefore, in order not to enter the political bazaar, we see that only the Syrian authorities ’claim is the goal of our work, and if coordination is required outside the framework of our work, we prefer that this should be done through the Syrian government and its specialized agencies,” Dr. Bou Said clarified.

He went on to say: ” Today, we are facing the issue of Corona virus globally, and Syria is one of the countries that suffers not only from the disease but in the fight against some countries through which they are trying to find alternative solutions to overcome Covid 19.”

Syria’s delegates are at a very high professional level

The ambassador affirmed that Syria is represented by the International Council for Rights and the International Commission for Human Rights, and it has its delegates and they are at a very high professional level, and cooperation takes place on various common issues and addresses.

“We are trying to turn the corners on humanitarian issues that are funded by some, and we seek to dismantle mines together in the sense of political obstacles. There are other committees that are coordinating with us, such as the Constitutional Committee, which tries to find common points that satisfy the aspirations of the Syrian people, but the opposition delegation does not cooperate as it should, and we believe this matter is due to the bifurcation of its international references, and this is unfortunate to see a group of the Syrian people not being capable judging and handling themselves their decisions,” he added.

Regarding the role of the “White Helmets” organization in Syria, Dr. Bou Said underscored that this organization is behind all the causes of the media fabrication on which some international powers have based their accusations against the Syrian government and army.

“I have been and still have a long history in monitoring this group and what it has done and will do in the future, as we believe that its role is still required by the countries that operate it,” he stated

“Most of the human tragedies were exploited and exaggerated, and we saw how some of the Western and Arab countries dealt with them even, and this caused us a big problem that we overlooked, but with difficulty, as we were supposed to receive support from the Arabs and this did not happen unfortunately…White Helmet is an organization supported by the British intelligence services MI6 and the BBC where this last supported and offered their logistic instruments to the organization and fabricated together the so-called ” Syrian Army Forces Massacres”. The British MOFA had to apologize three months after our intervention through reports submitted to the Council and stocked it on BBC with the white Helmet,” the ambassador concluded.

Vanessa Beeley, and the West’s on-going support for terrorists (including ISIS), in Syria (Vanessa starts at 46:55 minute mark)