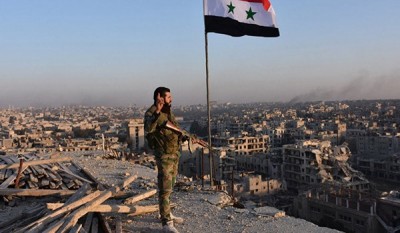 In the aftermath of the May 18, 2017, U.S bombing of Syrian armed forces near al-Tanf, in southern Syria, several important issues remain unresolved.

On the one hand, we know that there won’t be any outcry from Canada’s government, because it supports the terrorists in Syria.

And we know that there won’t be any outrage from Western corporate media, because it is an appendage of, and embedded with, the terrorists in Syria.

Reverend Andrew Ashdown, who has been to Syria ten times during the war as a guest of local churches, and has travelled extensively in areas most affected by the conflict, noted his interactions with a Syrian priest:

“From the cradle of faith and civilisation … A Syrian Priest: ‘If the West doesn’t stand by the Christians in the East, it will be the beginning of the end for Christianity in the West. Western Christians are contributing to the persecution of the Churches in the East.’ “

‘If Christians in the West are truly Christian and have Christian love, they must support the Christians in Syria, and the people of Syria. If this continues, what happened here will happen in Europe.’

Commenting on an undercover video recording of life in Idlib, under terrorist control, Ashdown observed,

“Interesting documentary about life in Idlib Province under terrorist ‘rebel’ control. No sign of any ‘moderates’ here, or of a ‘free’ society, and few Syrians support them, yet these are the people our governments are supporting. Perhaps those who support these extremist groups would like to visit for themselves, and experience the kind of ‘hospitality’ they have to offer?”

“The sheer evil of the West’s alliances and culpability in helping to destroy this country (and I make no apology for using that term), is despicable.”

People currently in Syria, such as Reverend Ashdown, or those of us who have recently been in Syria, and all of us who have studied NATO’s dirty war on Syria, know who supports the terrorists, and it is our governments. The recent U.S attack on Syrian military forces is yet another reminder of this.

The evil that is visiting Syria is infecting us all. Our silence and complicity bears witness to this.