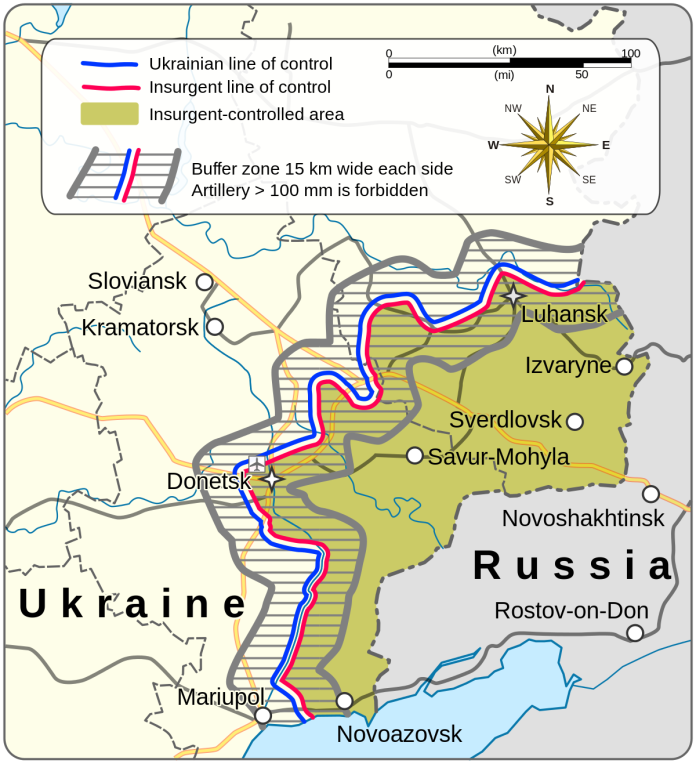 American foreign policy, wrapped up in hubris inside American exceptionalism, is incapable of recognizing a dangerous situation.

And a dangerous situation is what we have.

The Russian deputy foreign minister Sergey Ryabkov speaking for the Kremlin has made it clear that Russia will tolerate no further movement of NATO toward Russia’s borders.

Russia has ruled out any possibility of the former Russian provinces of Ukraine and Georgia becoming NATO members. If this red line is ignored, the consequences, Ryabkov said, “will be dire.” Russia will respond militarily, and the West, he said, will find it has undermined its own security, not Russia’s.

In other words, as the Kremlin sees it, the incorporation of Ukraine and/or Georgia into NATO is an unacceptable threat to Russian national security. Period. It is not negotiable.

In a rational world such an unequivocal statement by a preeminent military power with hypersonic nuclear missiles would be taken seriously.

But the Western World is no longer rational. It is a world drunk on arrogance. The NATO secretary replied to what is, in effect, an ultimatum from a nuclear power by rejecting out of hand that power’s security concern:

“Whether Ukraine joins NATO is up to the bloc’s member states and its leadership, and Moscow doesn’t have input into the decision.” The idiot NATO secretary went on to boast, foolishly, that NATO was so little impressed with Russian objections that NATO was “already training Ukrainian troops and consulting with them, and are conducting joint exercises and providing military supplies and technology.”

So NATO, so drunk on exaggerated American military power, spit in the Kremlin’s eye

The White House spokesperson replying for President Biden and the National Security Council said Washington “will not compromise” on NATO expansion, adding that Washington won’t accept the idea of halting NATO expansion, despite what Russia demands.

In other words–be certain to understand this and its consequences–Washington’s position is that Russia has NO legitimate national security interests except as defined by Washington.

Here we have a highly dangerous situation. One power says you are treading on me and we won’t tolerate it; the other power says you have no say in the matter.

During the 20th century Cold War we Cold Warriors heard every word, every intonation of what the Soviets said. To risk nuclear war because some fool had wax in his ears or was feeling macho that day was out of the question. In those days there were departments of Russian studies in US universities that were not dependent on funding from the military-security complex. There was public debate. There was always an independent expert, such as Stephen Cohen, to remind everyone of how the Russians saw the situation.

Today independent scholarship has disappeared. Russian studies programs in universities are Russophobic in keeping with their funding. As there are no objective scholars, there are no knowledgeable people in the US intelligence community. We can see this in the recent statement of Biden’s national security advisor Jake Sullivan, who reports that US intelligence agencies believe that Putin is “giving serious consideration” to an invasion of Ukraine.

In effect Washington is already at war with Russia.

Meanwhile last Thursday evening, December 16, Washington and its neo-nazi Ukraine puppet decided to confirm Russian suspicions that Washington and Ukraine represent revanchist Nazism. Only two countries voted against the UN resolution condemning Nazism. Yes, it was the United States and Ukraine. The utter total stupidity of the US vote is extraordinary. That Washington supports Nazism is the last thing the Kremlin needed to hear.

My generation was the last generation in the West to be educated instead of indoctrinated, and even we were fed lies about World War I and World War II.

Subsequent generations are largely unaware that in German-occupied Western Ukraine large armies were organized and incorporated into the German army’s march into Russia. It was remnants of these “Banderas” (Stepan Bandera) that Washington used to overthrow the Ukrainian government and install an American puppet state on former Russian territory while the Kremlin, ignoring its backyard, was enjoying the Sochi Olympics.

The mistakes that people make have more to do with world history than any good decisions.

I am watching Washington, which I know so well from a quarter century of high level participation, make the mistake of a lifetime. The Washington regime is so full of arrogance that it is unable to comprehend that Russia has run out of patience.

The Russians see a real problem. All Washington sees is a propaganda opportunity. This is a situation that leads directly to Washington miscalculating. The miscalculation will be fatal.

In America Russophobia is running amuck.

The Propaganda Ministry repeats daily that Russia is on the verge of invading Ukraine.

The American people, long trained to regard Russia as the enemy, have heard the allegation so many times it has become a fact.

The arrogant Biden regime has rebuffed Russia’s security concern, and the Republicans are no better. Blind belligerence towards Russia is building as Republican senators add their voices to the propaganda that Putin intends to invade Ukraine and “rob the Ukrainian people of their sovereignty.”( Washington already did that when it overthrew the elected Ukrainian government in 2014 and established a puppet state in Kiev.)

The Ukraine crisis is in part an armaments marketing program as the Republicans backing the bill are in tight with the military/security complex. But everyone is overlooking the effect on the Kremlin whose trust in Washington has reached zero on the scale.

Perhaps in preparation for what the Kremlin sees will be a showdown over Washington’s indifference to Russia’s security concern, the Kremlin has ordered two strategic nuclear missile forces to combat duty. Additionally, Russia has closed the northern sea route and deployed radio engineering regiments and electronic domes to jam US over-the-horizon radar. If US naval provocations continue in the Black Sea, Russia might also close the Black Sea.

Meanwhile, the neo-nazi Ukrainian battalions armed by Washington are escalating the situation with the Donbass Russians.

Washington is setting itself up for an embarrassing backdown or a major confrontation for which Washington holds few cards.

The original source of this article is Paul Craig Roberts

NEO-NAZIS FROM EUROPE RUSH TO FIGHT IN UKRAINE, FLEE FASTER (VIDEOS)/ By Southfront

Ukraine, It Was All Written in the Rand Corp Plan/ By...