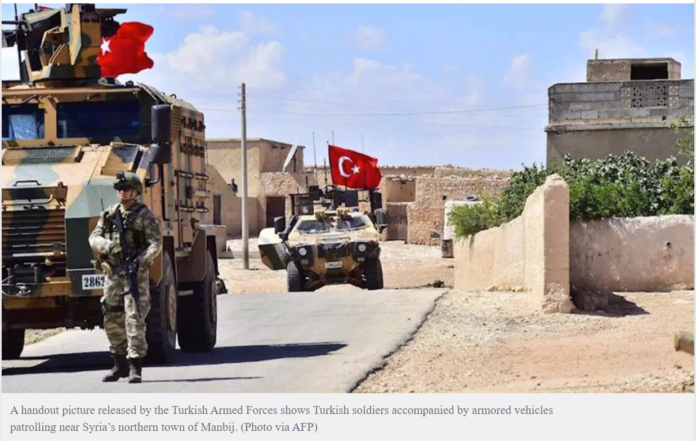 A political commentator says Turkey would be committing “supreme international war crimes” by launching a new military operation in Syria with the alleged aim of securing its southern borders, and that Ankara’s plan to establish a buffer zone in the Arab country’s north is nothing but a lie and a fake pretext.

Canadian writer and activist Mark Taliano made the comment in an exclusive interview with Press TV on Monday after Turkish President Recep Tayyip Erdogan announced that Ankara would soon launch a new offensive into northern Syria.

Erdogan said the offensive would take place to create a 30-kilometer “security zone” along the border, without providing further details.

Stressing that the operation would begin after Turkey’s military, intelligence, and security forces complete preparations, the Turkish leader urged NATO member states to support his country’s efforts to establish a safe zone on the border with Syria.

“Behind the lies and behind the fake pretexts is the fact that NATO member Turkey is committing supreme international war crimes as [it] supports terrorism in Syria, and as it occupies Syrian territory,” Taliano told Press TV.

“Creating buffer zones and securing borders are all false pretexts. Lest we forget, Turkey, like Washington and NATO, supports al-Qaeda, and ISIS (Daesh) in Syria. NATO and Turkey are the aggressors, the occupiers, the terrorist-supporters, the looters and plunderers,” he said.

“The so-called ‘international community’ has lost all credibility in matters of international law.  It violates international law as policy, which is why Washington uses the deceptive term ‘rules-based’ order.  Washington seeks to create rules that suit its predatory, aggressive agenda against humanity. The predatory agenda includes Washington’s support for ISIS and al-Qaeda in Syria and beyond, and also its support for Nazism in Ukraine,” the Ontario-based commentator said.

Asked whether Erdogan’s announcement was aimed at bolstering Turkish nationalist support for his two-decade rule as he gears up for difficult elections next year, Taliano told Press TV that the Turkish president “deserves no credibility,” and that such military operations would bear negatively upon his votes.

Last week, the United States warned Turkey against launching a new operation, saying the uneasy NATO ally would be putting US troops at risk.

Turkey has deployed forces in Syria in violation of the Arab country’s territorial integrity. The US military has stationed forces and equipment in eastern and northeastern Syria, claiming that it is aimed at preventing the oilfields in the area from falling into the hands of Daesh terrorists.

Damascus says the unlawful deployment is meant to plunder the country’s resources.

Ankara-backed militants were deployed to northeastern Syria in October 2019, after Turkish military forces launched a long-threatened cross-border invasion in a declared attempt to push fighters of the Kurdish People’s Protection Units (YPG) away from border areas.

Ankara views the US-backed YPG as a terrorist organization tied to the homegrown Kurdistan Workers’ Party (PKK), which has been seeking an autonomous Kurdish region in Turkey since 1984.

The Kurdish-led administration in northeastern Syria says the Turkish offensive has killed hundreds of civilians since it started.