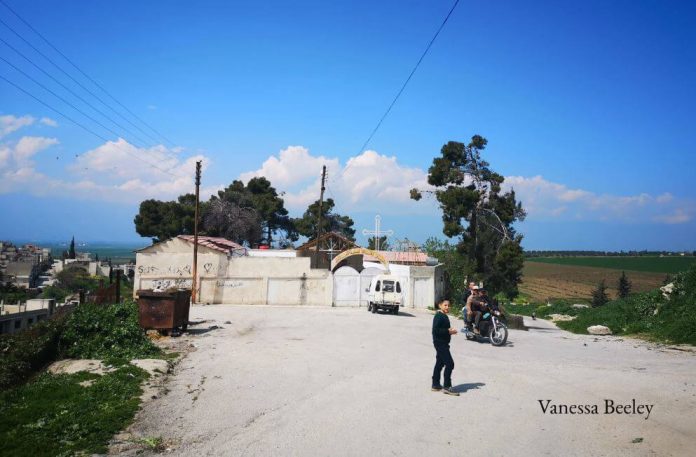 n the 12th of May, 2019, Jaish Al Izza — an armed affiliate of Hayat Tahrir Al Sham (HTS) — an Al Qaeda rebrand that controls the majority of Idlib province and Northern Hama — targeted the Syrian Christian town of As Suqaylabiyah, situated on the border of terrorist-held areas.

The attacks came just after the Syrian Arab Army liberation of Qalaat Al Madiq, a town only 500 meters from As Suqaylabiyah. The civilians of As Suqaylabiyah had seen this advance by the SAA as a victory — many of the attacks on their town had emanated from Qalaat Al Madiq, a Nusra Front stronghold intermittently populated by other extremist groups, among them Jaish Al Islam, which was evacuated from Douma in April 2018, and Jaish Al Izza, the HTS/Nusra affiliate.

The Monastery in As Suqaylabiyah, frequently targeted by extremist militant groups in Northern Hama and Idlib. Photo | Vanessa Beeley

The HTS terrorists targeted residential areas and the town’s monastery. Set high on the hill overlooking As Suqaylabiyah, the monastery doubled as a community center and school. HTS deliberately targeted the monastery, falsely claiming it to be a military center.

Families grieving the loss of children killed in As Suqaylabiyah, May 12, 2019. Photo | Gaith Al Abdullah

Shabiha is the derogatory term used by terrorist groups to describe anyone loyal to the Syrian government or army but in reality, it is used to excuse the murder of virtually anyone who does not adhere to the violent, sectarian ideology of many of Syria’s armed groups.

This callous dismissal of the deaths of innocent civilians and children is not only a common theme among the armed-groups’ media reports but is often mirrored in the Western press’ dismissal of civilians murdered by the militant groups they promote as rebels, government supporters or loyalists.

It is a familiar technique deployed to effectively dehumanize civilian deaths, in many cases to erase them from Western public consciousness, while amplifying the narrative that the Syrian government and Army are carrying out “unprovoked” attacks against civilians in areas under terrorist control. A prime example of this heinous information bias was the media reporting of the massacre in Rashideen in April 2017, when evacuees from the Nusra Front-besieged Idlib villages of Kafarya and Foua were massacred in the southern Aleppo district by a suicide truck attack.

I was present in Aleppo on the day of this horrific attack and interviewed survivors and families of the victims. I wrote a full report on the massacre in Rashideen and the media betrayal and politicization of the deaths of more than 100 civilians, the majority of them children. The following excerpt is taken from my article for 21st Century Wire where I expose the cynical CNN and Telegraph description of murdered children as “government supporters:”

Both CNN and the UK Telegraph were quick to dismiss the deaths among these persecuted minority communities inside Syria as a “hiccup” or the unfortunate demise of “supporters of Bashar Al Assad” – once more politicizing the death and mutilation of children to serve their narrative.The Telegraph edited its report after it was called out by RT for its cold-blooded dismissal of the murdered children as “government supporters” but a screenshot was taken beforehand.”

The four children killed in the HTS attack on As Suqaylabiyah on May 12, 2019. Photo | Gaith Al Abdullah

Four children — Bashar Nemeh, Jessica Karajian, Suhair Adnan and Engi Faisal Razouk — along with an adult woman, Hala Mkashkash, were murdered in the horrifying attack on As Suqaylabiyah, their young lives wiped out by Grad missiles almost certainly supplied to the extremist groups by the U.S or its allies.

Funeral of the four children killed in the HTS attacks on As Suqaylabiyah May 12, 2019. Photo | Salm photography

Five other children were injured by shrapnel, including Marcel, the brother of Bashar Nemeh, one of the children killed in the attack. Marcel suffered terrible head injuries and was rushed to Hama national hospital for emergency treatment. Just six days later, he succumbed to his wounds and died in the hospital.

The Nemeh brothers’ father was killed in 2014. He had joined the Syrian Arab Army to defend his country against the influx of Western-sponsored terrorist groups that began in 2011. Yasmeen Zarrouf, their mother, was left entirely alone in the world, her husband and two precious boys torn from her life in a war that has been enabled and sustained by Western media, governments and aligned institutions.

Marcel and Bashar, two of the children killed in the HTS attack on As Suqaylabiyah, May 2019, and their father, killed in 2014 fighting Western-backed militants in Syria. Photo | As Suqaylabiyah Facebook page

I have visited As Suqaylabiyah many times over the last year and have personally experienced a number of the attacks on the town by the HTS-dominated terrorist groups embedded in the surrounding countryside. In September 2018, As Suqaylabiyah and the neighboring town of Mhardeh were targeted with prohibited ground-launched cluster munitions and Grad missiles. In Mhardeh, 13 civilians were killed in the attack, another massacre that barely registered in Western reporting.

The shock that resonated throughout As Suqaylabiyah after the deaths of four children in May 2019 was unprecedented. I visited the town about a week after the attack. Mothers spoke to me of their grief and fears. Exams were about to begin and children would have to be gathered in the school every morning for a number of days. The panic was palpable. For days, the children would be sitting targets and the terrorists would clearly not hesitate to strike at the heart of the community in their long-standing efforts to drive these steadfast people from their land.

Relatives of the children killed in an HTS attack light candles in the streets of the Old City in As Suqaylabiyah. Photo | Ghaith AlAbdullah

Hundreds of candles were lit, illuminating the streets that the martyred children used to play in. Mothers, siblings who would never see their loved ones again stood by the flickering lights that were all that remained of the laughter that had echoed only a few days before in the narrow streets where the children rode their bicycles and kicked their football against the missile-scarred stone walls.

The funeral of Marcel Nemeh, six days after his mother buried his brother, Bashar Nemeh, May, 2019. Photo | Ghaith AlAbdullah

The funeral of Marcel Nemeh, just six days after his mother had buried his brother, was another brutal blow to the already traumatized citizens of the town. I spoke to a friend of Yasmeen, Marcel’s mother, who told me that this was a dark time for a mother whose world had been left a bottomless pit of despair and loss. These children have not been honored or even registered in any Western press, they have been ignored and dismissed like so many before them.

A memorial to the child martyrs in As Suqaylabiyah. Photo | Ghaith AlAbdullah

The grief of the entire town has been “disappeared” in the West, while in As Suqaylabiyah the images of the children join those of the more than 106 victims of terrorist attacks, whose photographs line the walls of the town in honor of the volunteer National Defence Forces (NDF) and other civilians whose lives have been lost defending the town against terrorist attacks since 2011.

Children killed in As Suqaylabiyah are immortalized in a memorial to the 106 residents of the town killed since 2011. Photo | Ghaith AlAbdullah

This recent intensification of attacks against As Suqaylabiyah has led to the establishment of a local initiative to train the wives and female relatives of those killed as snipers to defend the town against the increasing threat of an armed invasion by militants, as the Syrian Arab Army pushes them out of the so-called “deconfliction” zones established by Russia and Turkey in September 2018.

Turkey has repeatedly violated the agreement that led to the creation of the “deconfliction” zones.  They have established military points inside Idlib and have systematically been reinforcing armed extremist groups with military operatives, weapons and equipment. As Suqaylabiyah, Mhardeh, surrounding villages, and even West Aleppo have been repeatedly targeted by armed groups in the faux “deconfliction” zones, where terrorists are still using heavy weapons that were supposed to have been removed as part of the  Russian/Turkish Sochi agreement.

I spoke to a group of female snipers in As Suqaylabiyah, their names withheld for their own security. Each spoke to me about the martyrdom of her husband, son or brother and told me that the taking up of arms gave them all a sense of purpose, a way to turn their loss into constructive, defensive action, a way to serve their town and to support the young men from the town who volunteered in the NDF.

I could not help feeling a deep sadness that women my age and younger should feel that the only way to assuage their grief was to fight in a senseless war not of their making — but this is Syria, where time and time again I am told that every Syrian will take up arms to defend their country against international terrorism.

What many people in the West are unaware of, thanks to the deliberate misrepresentation by their state-aligned media, is that the Syrian Arab Army is the Syrian people. It is an inclusive conscript army, its soldiers come from every sect and community across Syria. They are a reflection of Syria’s secular society in total contrast to the grim sectarian composition of the extremist forces promoted by the West as “freedom and democracy fighters”.

The National Defence Forces of As Suqaylabiyah were among the coffin bearers on the day of the funeral of the child martyrs. These young men and their Commander, Nabel Alabdalla, have defended their town and their country for eight years. Many have sacrificed their lives so their families and the people of Syria may survive this war with their secular state intact.

They are of the people, for the people. Any media narrative that fails to defend these Syrian soldiers who are fighting international terrorism on behalf of their people and their homeland is heinously misrepresenting the conflict and the Syrian military role in removing the Western-incubated terrorist cancer from this world, in my opinion.

As Nabel Alabdalla said to me after one Grad missile attack on the town:

We confirm that we always carry the candles of love and peace in one hand and the other hand is on the trigger of our gun. We will never leave this land.”

Feature photo | Families grieving the loss of children killed in As Suqaylabiyah, May 12, 2019. Photo | Salm Photography

Vanessa Beeley is an independent journalist, peace activist, photographer and associate editor at 21st Century Wire. Vanessa was a finalist for one of the most prestigious journalism awards – the 2017 Martha Gellhorn Prize for Journalism – whose winners have included the likes of Robert Parry in 2017, Patrick Cockburn, Robert Fisk, Nick Davies and the Bureau for Investigative Journalism team. You can support Vanessa’s journalism through her Patreon Page.

The views expressed in this article are the author’s own and do not necessarily reflect MintPress News editorial policy.