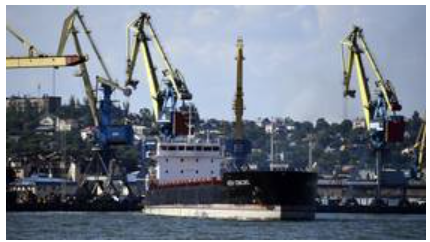 Western media and state officials keep blaming Russia for the ‘food crisis,’ but Moscow is trying to reopen Ukrainian and Donbass ports

Eva Bartlett is a Canadian independent journalist. She has spent years on the ground covering conflict zones in the Middle East, especially in Syria and Palestine (where she lived for nearly four years). @evakbartlett

Without much notice in the West, on June 21, the first foreign ship departed from the Port of Mariupol since Ukrainian and foreign mercenary forces were fully forced out of the Donbass city a month prior. Escorted by Russian naval boats, the vessel’s departure set the precedent for a resumption of normal port activity to and from Mariupol.

Russia’s Defense Ministry on May 20 announced the liberation of the Azovstal plant from Ukraine’s Nazi Azov Battalion, and some days later stated that sappers had demined an area of one and a half million square meters around the city’s port.

In early June, the ministry declared the facility ready for use anew. “The de-mining of Mariupol’s port has been completed. It is functioning normally, and has received its first cargo ships,” Defense Minister Sergey Shoigu said at the time.

Russia promised to give ships safe passage, and on June 21, the Turkish ship Azov Concord left with a Russian escort. At Mariupol port that day, prior to setting off, the captain of the ship, Ivan Babenkov, spoke to the media, telling us that the vessel, without cargo, was heading to Novorossiysk for loading, and then on to its destination.

Rear Admiral Viktor Kochemazov, commander of the Russian naval base in Novorossiysk on the Black Sea’s northeastern coast, down the Kerch Strait from Mariupol, explained that while the corridor has been operational since May 25, the nearly one-month delay in departing was because “ships were significantly damaged during the conduct of hostilities.” Notably, he also said that some ships were deliberately damaged by Ukrainian forces in order to prevent them from leaving.

Read more Ukraine’s neo-Nazi Azov Battalion has built a ‘state within a state,’ and it despises both Russia and the liberal West

From aboard a Russian anti-sabotage forces boat, media watched the Azov Concord leave port. Further on, the ship would be met by warships of the Novorossiysk base and escorted to the Kerch Strait where FSB border control ships would continue to escort the ship.

A Bulgarian ship, the Tsarevna, was readying to depart the port next, “also following the same humanitarian corridor to its destination in accordance with plans for the use of the court by the owner,” Rear Admiral Kochemazov said.

Predictably, just as the Western media continues to ignore Ukraine’s war crimes against the Donbass republics, including not only the bombing of houses, hospitals, and busy markets –  plus the killing and maiming of civilians – so too do they omit coverage of anything positive emanating from areas where Ukrainian forces have been ousted and stability restored.

Instead, Western media continues to spin the story that it’s Russia that’s blocking ports and preventing grain exports, and blame Moscow for “aggravating the global food crisis” – when in reality, it is Ukraine that has mined ports and burned grain storages.

More blatant disinformation from our US colleagues. They perfectly know that the Ukrainian ports are mined by Kiev and our offers of humanitarian sea passages were repeatedly rejected. And don’t trigger famine in #Ukraine by depriving it of grain-don’t tell us we didn’t warn you! https://t.co/Y9PqG9hoJZ— Dmitry Polyanskiy (@Dpol_un) May 12, 2022

In fact, according to Russia’s Ministry of Defense, “70 foreign vessels from 16 countries remain blocked in six Ukrainian ports (Kherson, Nikolaev, Chernomorsk, Ochakov, Odessa and Yuzhniy). The threat of shelling and high mine danger posed by official Kiev prevent vessels from entering the high seas unhindered.”

While Russia maintains it has opened two maritime humanitarian corridors in the Black and Azov Seas, Kiev is apparently not engaging with representatives of states and ship-owning companies about the departure of docked foreign ships.

Meanwhile, in the same vein, media outlets like the New York Times (writing as always from afar) claim that Mariupol is “suffering deeply” under Russian rule (citing the runaway former mayor, nowhere near the city for months, who is the source of previous war propaganda) even describing the Azov Neo-Nazis as “the city’s last military resistance.”

Yet, what I’ve seen in multiple trips to Mariupol in the past couple of weeks is rubble being removed so that the rebuilding process can begin, newly established street markets, public transportation running, and calm in the streets.

The people of Mariupol have indeed suffered, but now that the Azov Nazis and Ukrainian nationalists no longer reign, they can live without fear of persecution, execution, rape, torture, and all of the other ‘democratic values’ of the forces backed by the West.

The rebuilding will take time, but with the port functioning anew, and the possibility now of also bringing reconstruction materials by sea, it can begin, ship by ship.

READ MORE: The UK is Doing Its Best to Stir a Food Crisis While Pinning the Blame on Russia/ By Ekaterina Blinova