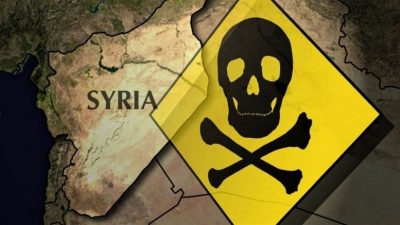 Big Lies become embedded in our collective consciousness, they grow roots, metastasize, and become the hardest to dislodge.

The notion that the war on Syria is “humanitarian” (predicated on fabricated atrocity stories falsely attributed to “Assad” who, propagandists would have us believe, “kills and gasses his own people”) is absolutely ridiculous. But people believe it nonetheless.  Historical memory (if it ever existed) is totally obliterated from their consciousness and it is displaced by the Lie[1].

Those who create the lies hold broad-based, infantilized populations, in contempt.

The war on Syria is anti-humanitarian[2] in every imaginable sense.  Evidence on the ground has dismantled the Lie, every day, for the last seven years, but the Big Lie remains ascendant.

Right now, Syrians are celebrating a victory over NATO terrorists in East Ghouta, terrorists who have been targeting school children and innocent civilians in Damascus for years.[3] It is a victory for human rights and for peace as the remaining terrorists are bussed out of the area.

[1] Jeremy Salt, “BBC Betrays the Most Basic Journalistic Principles When It Comes to Syria.” American Herald Tribune. 15 January, 2018.( https://ahtribune.com/world/north-africa-south-west-asia/syria-crisis/2096-bbc-journalistic-principles.html) Accessed 24 March, 2018.Demonization of Assad and His Government. Syrians living in Syria know that President Assad is not a “Monster”