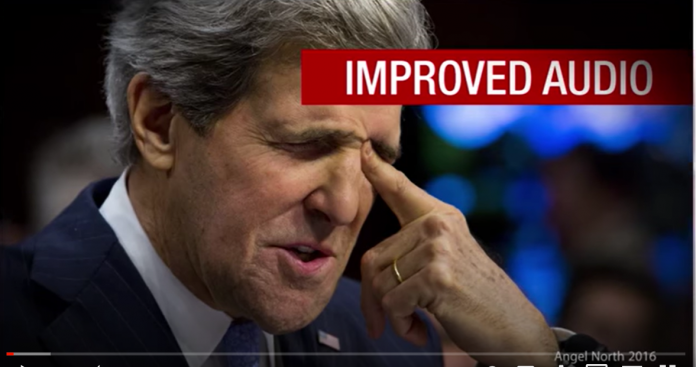 On 30 September 2016, The New York Times published extracts of an audio recording of a conversation between the Secretary of State, John Kerry and members of the Syrian “opposition”.

The conversation took place on 22 September 2016, at the sidelines of the UN General Assembly.

We hear him berating the US Congress for refusing to send men to bring down the Syrian Arab Republic and advising the opposition to find another military power to take over from the US and to bring it to power.

The extracts chosen by the New York Times lead us to understand that the State Department could no longer support the National Coalition of Opposition and asked it to look to other sponsors.

The complete recording (36 minutes) was published on 1 January by The Last Refuge. It completely alters the sense of the conversation and accordingly is evidence that the extracts which the New York Times initially sought to publish do not actually seek to inculpate the Obama Administration but to protect it.

In the complete recording, we hear the Secretary of State

– confirm that the strategic aim of the war that the Obama Administration led since 2011 against the Arab Syrian Republic is to topple the regime.

– confirm that the Obama administration was hoping that [a subrogation would take place] and Daesh would be able to step into its place it take down the Syrian Arab Republic.

– confirm that the Obama administration provided Daesh with arms to topple the Syrian Arab Republic.

This recording dispels the myth of a so-called Syrian revolution and equally the myth that the West is fighting Daesh.

It gives us a more meaningful understanding of the tensions within the Obama administration and why General Michael Flynn resigned.

Under international law, supporting Daesh is a crime against Humanity.

Video: The Legitimacy of Official Covid-19 Data Collapses. The scaffolding of...

Syria’s Victories Are Our Victories