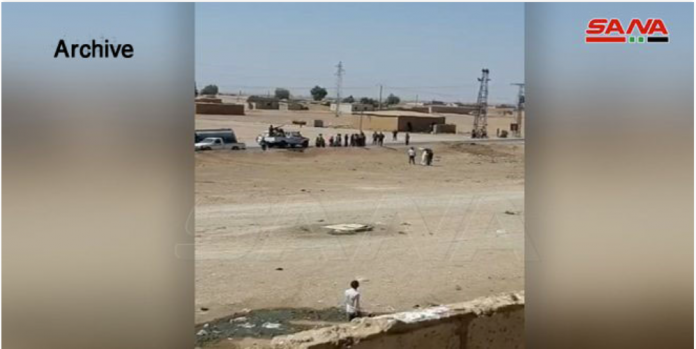 Hasaka, SANA- In line with the theft and looting of national wealth from the Syrian al-Jazeera region by the US occupation, QSD militia has stolen a power transformer with a capacity of 20 kW.

Local sources from Tal Hamis township told SANA reporter that militants affiliated with QSD militia stole a power transformer from Tal Hamis power station in conjunction with encircling the building of the electricity company in the township by the US occupation forces.

The sources pointed out that a convoy of six US military armored vehicles and 3 armed pickup vehicles belonging to QSD imposed a curfew in Tal Hamis in an attempt to transfer the stolen items.

Over the past years, QSD militia with the support and participation of the US occupation, has plundered the underground resources and strategic crops of wheat and barley and the livestock in the areas where they are deployed in the Syrian al-Jazeera region, and it has smuggled large amounts of them to the Turkish markets and northern Iraq.

Canadian journalist: From Syria to Ukraine, Western media is practicing the same lie