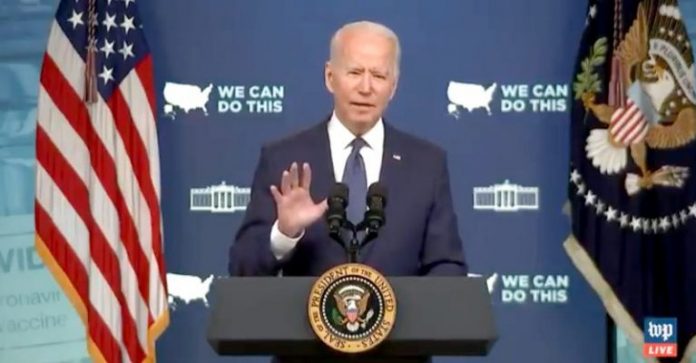 “If Governors won’t help us beat the pandemic, I’ll use my power as President to get them out of the way.”

In the aftermath of President Joe Biden’s public announcement mandating a national vaccination program during which he refused to take any questions, there is something ludicrously bizarre for an illegitimate President who is obviously experiencing massive dementia related disorders; for that same feeble minded, mass of confusion to then dictate a national mandate affecting up to 100 million Americans as if he or his executive order are either rational, competent or constitutional.

In a frenzy to avoid the constant reminder of his immense lack of leadership that led to the screw up in Afghanistan, as his approval poll numbers tank to nearly unfathomable depths and as the twentieth anniversary of 911 adds more American grief to the entire tragedy, the Biden White House dared to adopt an indefensible malicious policy with the end goal of replacing a constitutional republic with a not-so-benign one-man tyranny.

Even in the early reaction to Biden’s announcement, there is an emerging existential fight of a lifetime brewing; stimulating Americans with massive civil disobedience and widespread constitutional and legal challenges.

Two days after the announcement, the feckless Biden traveled to Denver proving who controls the White House for what was called a “Build Back Better” event although details were not disclosed.   BBB is associated with World Economic Forum efforts to  preordain a new world economic order while using Covid as the initial precipitating event.  In other words, what has been described as a global Covid health crisis is merely the next chapter in the globalist effort to takedown civil society and remake the entire planet into the WEF’s world vision.

It is no longer secret that the UN’s Agenda 2030 for Sustainable Development which is also referred to as the Green New Deal, George Soros’ Open Society Foundation and Bill Gates Foundation, as the UN’s WHO (World Health Organization) major funder and including the Rockefeller 201 event have been in collusion for decades. Their overall intent has been destroying every shred of a democratic republic and our national sovereignty to be replaced by a totalitarian One World Government. The WEF was created in 1971 to support UN Agenda 21 which has since morphed into UN Agenda 2030.

READ MORE: The Biden-Ghani Call Might be More Damning than the Trump-Zelensky One

Adding the finishing touches, the elite media industry, Silicon valley social media conglomerates and the Democratic party are all on-the-ground agents to make that transition a reality.   Voila – here we have Biden’s national mandate to force every citizen to be innoculated with a serum of suspicious contents and origin.

In June 2019, the WEF and the UN signed a strategic partnership agreement to outline areas of cooperation to implement Agenda 2030 which reads like an idealistic wish list for every global citizen – until scratching below the surface to its actual implementation.

Immediately after Biden’s press announcement, nineteen Governors and two state attorney generals (all Republicans) announced their opposition.  Most Governors then instructed their Attorneys General to prepare legal action as the Republican National Committee announced a lawsuit and The Daily Wire which has over one hundred employees, announced it will not obey the mandate.  Florida Governor Ron diSantis summed up the opposition with “It’s not based on science. He’s saying he’s losing patience with people?… We don’t live with a one-person rule in this country. We live in a Constitutional system.”

Biden‘s lecture to the non-vaxxers sounds as George III might have chastised those pesky colonists. “We’ve been patient, But our patience is wearing thin, and your refusal has cost all of us.” Biden then failed to reveal how all members of Congress and their staff are exempt from the mandates as are US Postal Service employees.  None of the thousands of immigrants crossing the southern border or the newly arrived unvetted Afghani immigrants are required to be vaccinated.

Before the announcement, Biden, who finished 76th  in his class out of 85 in Syracuse Law School,  promised that ‘if Governors won’t help us beat the pandemic, I’ll use my power as President to get them out of the way.”  Former Congressman and White House Senior Advisor Cedric Richman offered  further assurance that Biden is willing ‘to run over” any Republican Governors who resist.

What Biden and his Democratic bumblers have forgotten is that they cannot ‘make’ law without the legislative branch and that Biden cannot dictate policy to any State.  In other words, no Governor or President can mandate any lockdown without the force of law or those mandates are legally  unenforceable.  The Democrats, never fans of state’s rights or apparently the Constitution, will be taken to court as a reminder that Amendment X of the US Constitution provides each state with ‘powers not delegated to the United States … reserved to the States, respectively or to the people.”

After Covid, the WEF already has the Fourth Industrial Revolution, also known as the Great Reset, lined up and ready to impose itself on what remains of American society.   For all American citizens, the Biden Mandates threaten the very future of our American tradition, our families and friends.  It is the responsibility of all of us to actively engage in the struggle to thwart the globalist agenda from achieving its ultimate goal:  a Totalitarian One World Government.

“In its most pessimistic, dehumanized form, the Fourth Industrial Revolution may indeed have the potential to “robotize” humanity and thus to deprive us of our heart and soul.”

Many thanks to Susan Westall for providing a list of attorneys willing to provide legal guidance against the Biden Mandates.

Renee Parsons served on the ACLU’s Florida State Board of Directors and as president of the ACLU Treasure Coast Chapter. She has been an elected public official in Colorado, staff in the Office of the Colorado State Public Defender, an environmental lobbyist for Friends of the Earth and a staff member of the US House of Representatives in Washington DC. She can be found at reneedove3@yahoo.com.

She is a frequent contributor to Global Research.

12 November 2020The original source of this article is Global Research

Simulation of a Cyber Attack against the Global Financial System. Israel’s...

Rocco Galati and the Canadian Government’s Breach of Charter Rights

Does the PCR Test Affect the Pineal Gland? Humans and “Transhumans”....

Video: The Pandemic is a Global Coup d’état. Reiner Füllmich