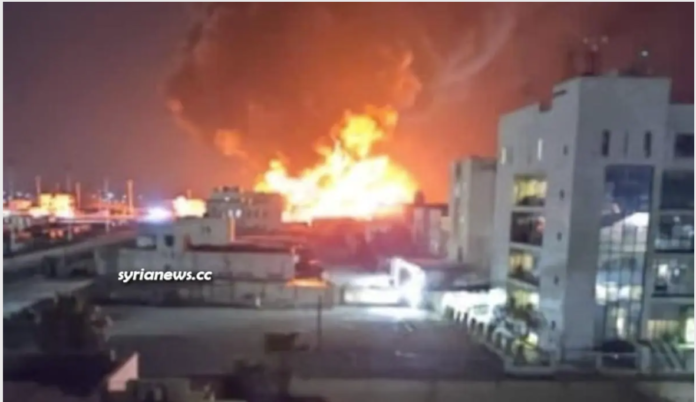 Again, Hasakah is in Syria, which is not part of the USA.

At this writing, the Syrian Arab News Agency has reported on chaos — including shootings inside and out, Biden regime military helicopters flying about, and the Obama-created SDF terrorists criminally-imposed curfews against the indigenous Syrian population — not casualties, nor the numbers of terrorists imprisoned by other terrorists who managed to escape.

Among uncorroborated reports, 22 SDF terrorists were killed in the fighting, & ISIS/Daesh terrorists took over a part of the prison that actually houses weapons and ammunition.

Syrian journalist, Rasha Hasan reported twenty escapees in the afternoon of 20 January; about twelve hours later, a leaked document from Iraqi Military Intelligence claimed that the intention of the vehicular detonations outside the occupied Syrian prison was to move 5,000 ISIS/Daesh takfiri into Iraq (of possibly pure coincidence, about twenty-four hours later, ISIS terrorists massacred eleven Iraqi soldiers in the Diyala governate, further to the south of the autonomous region of Iraqi Kurdistan.).

The Biden regime’s illegal forces have a long war criminal history of recycling ISIS savages from illegal prisons, from different regions of Syria, back and forth into Iraq — atrocities that are required to maintain the function of the Military Industrial Complex.

“Terrorism is defined in the Code of Federal Regulations as ‘the unlawful use of force and violence against persons or property to intimidate or coerce a government, the civilian population, or any segment thereof, in furtherance of political or social objectives’ (28 C.F.R. Section 0.85).“ — fbi.gov

Particularly sadistic, is the fact that the Biden troops use the illicit al Yaarubiyah crossing — run by the SDF terrorists since 2013, before the Pentagon demanded a re-branding from the YPG name, in 2015, which was on the US terror list — to transport stolen Syrian oil, stolen Syrian grain, and ISIS takfiri, into the Autonomous Kurdistan Region of Iraq.

Though there has not been much reporting from NATO stenographers on the recent attack and escapes, all such sources have normalized the colonialist invasion and occupation by the US, of the prison of another country. We also hyperlink the Defense One report of 24 February 2021 which arrogantly announced western supremacy news that the “US-led anti-ISIS coalition is funding a dramatic expansion of a large detention facility in northeastern Syria…”.

This is a prison in the city of Philadelphia; can any westerner imagine it being occupied by the French military with the assistance of a gang of terrorists armed by France?

Now, further imagine that a third gang of terrorists/illegals in Philly car bombed the prison in the US, so that it looked like this, from a distance:

Excepting imperialists who lead the world in global genocide, is there a sane person who would consider this triad of war crimes and other atrocities as normal?

Updated information reports that thousands of ISIS terrorists were able to leave the Syrian prison under Biden regime and SDF occupation; let all westerners consider their reactions were this to be perpetrated against their homelands.

To our few readers who may persist in supporting either Biden or Trump, please note that this atrocity was created by both your war criminal leaders.

Commentary by Prof. Anderson regarding the West’s support for al Qaeda/...