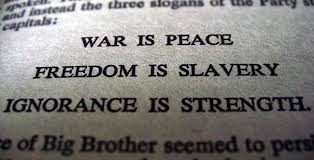 Numerous labels apply: Parallel Left, Imperial Left, Fake Left. Whichever label is used, however, the reality remains that people and agencies who posture as “Left” or “Progressive” on one hand, and support terrorism and illegal warfare on the other, are neither Left, Progressive, nor forward looking. They represent anti-Life embracing trajectories, and they are arguably more dangerous than the Right. In fact, their disguised ideology intersects with the war-mongering “Right”.

Just like the warmongers and fascists, they embrace the ridiculous notion that war is somehow “humanitarian”, that al Qaeda and ISIS are “rebels”, that non-existent “moderate” terrorists exist, and that the dirty war on Syria is a “civil” war.

The Fake Left embraces taboos. False flags are “conspiracy theories” so they could never happen at home or abroad. NGO’s are credible sources and not fronts for intelligence agencies, nor do they receive government funding according to the Parallel Left. The White Helmets must be legitimate since they won an Oscar, and Hollywood never lies.

When Democracy Now or other sources that represent “controlled opposition” interview pro-regime- change people, and omit evidence-based sources, and credible sources who have actually been to Syria and studied the war in context,the Fake Left accepts the omissions, which amount to Big Lies. For the parallel Left, the Lie has become the Truth. The Fake Left denounces the Establishment and the deep state, but is (unwittingly?) the strongest cheerleader for both, since its“opposition” disguises its support.

Democracy Now amplifies evidence-free (war-mongering) narratives about the war on Syria, even as it exclude evidence-based (peace-making) narratives. Reportedly, Democracy Now chose not to interview Vanessa Beeley, who is an expert on the White Helmets, but did interview Anand Gopal,[1]who demonstrates support for the war on Syria.  Similarly, at the time of this writing, Democracy Now has failed to report on Seymour Hersh’s recent revelations – involving military and intelligence transcripts of real-time communications – which disprove Washington’s stories about the alleged sarin gas attack at Khan Sheikhoun, in Idlib Province, Syria.

READ MORE: “Never Again” or “Again and Again”? Syria has been Fighting, and Winning A Just War against Terrorism

Hersh’s evidence-based conclusion? “Syria did not drop a sarin bomb that morning. It was known to everybody in the command. Period.”[2] Omissions of studies such as Hersh’s amount to Big Lies that enable the wars of aggression and the terrorism, and the widespread death and poverty.

Democracy Now has received over $900,000 in grants from the Lannan Foundation alone, since 2014.[3] It also receives monies from other foundations, and it is a profit-making organization, despite its non-profit status.

Similarly, any protest movement which is funded by foundations or fake NGOs is counter-productive. Controlled opposition, mentioned above, balkanizes broad-based protest movements.

“there is an obvious contradiction: another world is not possible when the campaign against neoliberalism is financed by an alliance of corporate donors firmly committed to neoliberalism and the US-NATO military agenda.”

The Truth will set us free, but currently the West is enslaved by War Lies Inc.

Tim Anderson ‘There is zero credible evidence that the Syrian Arab...