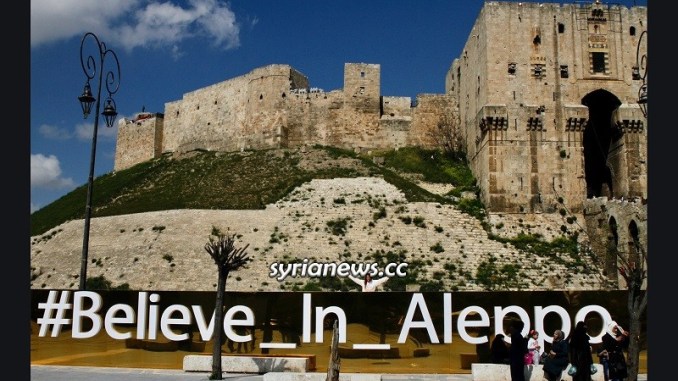 The Syrian Arab Army (SAA) declares the city of Aleppo secure after over 7 years of being invaded and bombarded by tens of thousands of anti-Islamic terrorists.

Against all odds, and in the very difficult weather conditions the SAA cleaned all of Jamiyat Zahraa western Aleppo after taking control of the Llayramon and cleaned the two cities of Hreitan and Anadan in Aleppo’s northwestern countryside.

The SAA stormed the districts of Rashidin 1, Rashidin 2, and Rashidin 3 west of Aleppo and cleaned the village of Kafr Naha, the Regiment 46, and Jamiyat Ridwan in the southwestern countryside of the province.

Aleppo – Idlib highway in the province of Aleppo is under the control of the Syrian Arab Army after cleaning the Police Academy and a number of residential blocks southwest of the city.

Aleppo is the second city in Syria and is the economic powerhouse of the country, its people were living under constant terror attacks and indiscriminate bombing until just a few hours ago. Over 150 civilians were killed by these bombings in a couple of months towards the SAA military operation to clean the region.

The most-hated pariah Erdogan, the head of NATO member state and commander of NATO’s second-largest army, tried his best in shouting, lying, pimping, and sending Turkish Army soldiers to stand as human shields to protect al-Qaeda terrorists to supplying al-Qaeda directly with the latest weapons and armored vehicles, even MANPADS that enabled them to shoot down two Syrian Army helicopters within one week, now he’s seeing his dream of becoming the current day Caliph collapse with his own eyes.

Congratulations to humanity the liberating of one of its oldest continuously inhabited cities, the second to Damascus in historical importance.

All disgrace and shame on NATO states who waged the War of Terror against Syria using over 350,000 terrorists imported from all sides of the world and spending over $200 billion, at least. $137 billion spent by Saudi Arabia and Qatar until 2017 alone.

As Suqaylabiyah: The Syrian Christian Town Near Idlib the West Has...