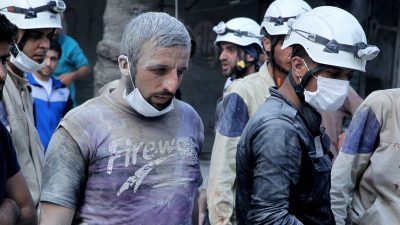 Whereas there are untold numbers of Western-created refugees throughout the world, what author Franz Fanon appropriately named “The Wretched of the Earth”, Canada has chosen to prioritize the “White Helmets” evacuated from Syria.

As with similar colonial narratives, the lies wrapped around this operation constitute war propaganda. White Helmets are not “saviours” to be protected. In fact, they are — in some instances by their own admissions – terrorists.

“if a White Helmet faction is led by Nusra Front (many are according to Al Mahamid), then it follows that the whole group will be Nusra Front. The White Helmets in Dara’a were originally led by a member of the FSA – Abdellah Assarhan. Following Al Mahamid’s logic then all members of the Dara’a White Helmets will be FSA and involved in furthering the sectarian aims of the FSA in Dara’a.”

“Of course!  They might be Nusra Front and run a White Helmet center so this means all his colleagues are also Nusra Front … “

Additionally, White Helmets operatives told Beeley that 50% of the evacuees were terrorist leaders and ISIS fighters.[2]

Canada’s Minister of Foreign Affairs, Chrystia Freeland, for her part, told the Global and Mail[3] that,

“…  the fact that a group of White Helmets and their families were able to escape Syria and are now finding refuge around the world is a real example of not cursing the darkness, and lighting a small candle …”

Featured image is from MintPress News.

What Is the Biggest Lie About the Syrian War? Western War...

Permanent War and Poverty. Acting on Behalf of Washington, the UN...