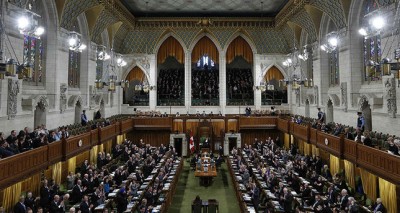 The “Wahhabi” ideology, instrumentalized by the West and its allies to grow terrorism, is the polar opposite to the religion of Islam as practiced and taught, for example, by Syria’s Grand Mufti, or by Dr. Bouthaina Shaaban, political and media advisor to President Assad, who asserts that “(t)hose who kill in the name of Islam, those who destroy in the name of Islam, are not Muslims at all.”

Whereas “Wahhabism” is exploited to create hate and intolerance, Islam is a religion of love and peace.

Canada’s sectarian terrorist proxies in Syria – “moderates” do not exist, and never did – commit genocide and all manner of horrific crimes in the name of Islam, but they are in fact anti-Islamic.

When the Canadian government presents itself as opposing Islamophobia, it is being willfully duplicitous, since Canada supports and nurtures the Saudi Arabian-style “Wahhabism” and sectarianism in Syria and beyond.  And it is this toxic ideology that creates fertile ground for Islamophobia, not the genuine Islam as taught and practiced in Syria.

If the Canadian government supported secular governance and pluralism in Syria, as opposed to hatred, intolerance, and Sharia law, then it would be supporting rather than trying to destroy, Syria’s legitimate government.

Before the West’s pre-planned, dirty/government change war against Syria, the country was blessed with a secular government, and a diverse, tolerant population, where Mosques and Christian churches stood side by side in peace and harmony. And this is still the case in government secured territories – which include most of Syria now.

But imperialists need to generate lies and hatred to advance their country-destroying agendas, and this is what the Canadian government and its supine agencies, including the corporate fake media, have done, and continue to do.

The Nuttall/Korody synthetic terror case, for example, was engineered to create, rather than to suppress, Islamophobia.

The demonization of Syria’s elected President, Bashar al-Assad, also serves to create Islamophobia, since fake media conflates his government with Islam and Muslims, when in fact it is a secular government.  Even the demonization of Russia creates Islamophobia, since it is common knowledge (or at least it should be), that Russia is waging a successful war against sectarian terrorism in Syria, even as Canada and its allies support the aforementioned terrorists.  Mainstream Media “perception managers” would have us believe that the sectarian terrorists are “moderate”, or that they represent a civilized alternative to Syria’s elected government, and that Russia is therefore “bad” for destroying the terrorists. So, in its words and deeds, Canada is tacitly presenting sectarian terrorists as representative of “Islam” or “Muslims”, which is an inversion of the truth.  The terrorists in Syria are anti-Islamic.

Terrorists who commit genocide, who deal in sex slaves, who commit torture, and mass beheadings, who engage in organ harvesting and traffic in drugs, are in no way Islamic.

Canada’s deeds in Syria, and its false messaging about Syria, create and sustain Islamophobia. Empty words from hollow politicians simply disguise the truth.