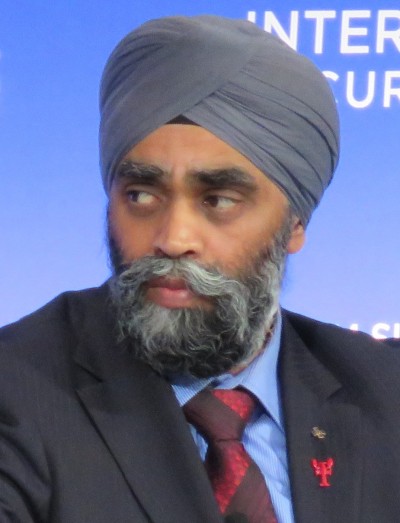 Presumably his “Assad must go” narrative about Syria is wearing thin.  After all, NATO member Turkey is a training ground for ISIS, a transit point for terrorists entering Syria, and, like the Canadian government, all of NATO, the Gulf monarchies, Wahhabi Saudi Arabia, and apartheid Israel, a staunch supporter of the terrorists; plus, it has also been long established that there are no “moderates.”

Presumably, too, Sajjan needs to rebrand and recycle the “threat” narrative, and the “NATO are the good guys” meme, so he is now reintroducing Russia as a threat.

Corporate media presstitutes, naturally, are all too willing to go along for the ride, even though reality and solid evidence contradicts the Western narrative.

The “Russia is a threat” narrative may have legs though, since any government that actually opposes terrorism is a perfect scapegoat for Empire:  Libya, Iraq, Syria, and the Ukraine all successfully opposed terrorism before being attacked by NATO and its terrorist proxies.

When Russia bombs ISIS positions in Syria, ISIS territory actually decreases, and towns are liberated, as might be expected.  When the U.S “bombs ISIS” in Syria, on the other hand, ISIS territory increases, thus revealing barely disguised neo-con ambitions, and exposing the Big Lie.

READ MORE: Trump Has Surrendered; Will Putin Be The Next To Surrender? The Chemical Attack is a Washington Orchestrated Event

Either Sajjan is totally ignorant of Ukraine’s recent history – which is possible — or he is lying about the Ukraine as well.

Even the Head of Stratfor, George Friedman, publicly admitted that that the crisis in the Ukraine was initiated by “the most blatant coup in history.”

Michel Chossudovsky confirms this assessment by explaining in “Two Year Ago: The U.S. has Installed a Neo-Nazi Government in Ukraine” that,

“Confirmed by Assistant Secretary of State Victoria Nuland, key organizations in the Ukraine including the Neo-Nazi party Svoboda were generously supported by Washington: ‘We have invested more than 5 billion dollars to help Ukraine to achieve these and other goals. … We will continue to promote Ukraine to the future it deserves.’ “

A video by St. Pete’s for Peace graphically uncloaks the lies perpetrated by NATO warmongers and their presstitute accomplices.

Crimea, home to Russia’s Black Sea Naval Base – and likely the real target of the coup — exercised its right to self-determination on March 16, 2014, by way of voting in a referendum and opting for independence from the neo-Nazi infested, illegal Kiev government.  Russia did not invade or “annex” the peninsula. Western protestations to the contrary ring hollow.

He argues further that,

“Washington claims, falsely, that the referendum cannot be valid unless the entire population of Ukraine votes and agrees with the decision by Crimeans. Note that when Washington stole Kosovo from Serbia, Washington did not let Serbians vote,” and that,  “Under the logic of Washington’s UN resolution, large parts of Ukraine are not legitimately part of Ukraine. They have remained parts of Russia, because Russians were not allowed to vote on their transfer to Ukraine. Thus, there is no issue about ‘Russia annexing Crimea,’ because, according to Washington’s logic, Crimea is still a part of Russia.”

Needless to say, all of this begs some important questions:

What would happen if the roles were reversed and Russia was trying to impose its military will on land occupied by a NATO military base?

What would happen if Russia placed its missile systems close to the U.S border?

NATO, with its missiles, and its military bases, and its proxy wars, are a threat to Russia, and to all of us.  Russia is not the threat.

For the sake of peace and sanity, Canada’s government needs to reacquaint itself with recent historical records, and it needs to reduce, or totally reject its NATO “commitments”.

We are supposed to be a sovereign, self-determining, peaceful nation.  Our foreign policy demonstrates otherwise.

Axis of Resistance.The West and its Allies Support al Qaeda and...