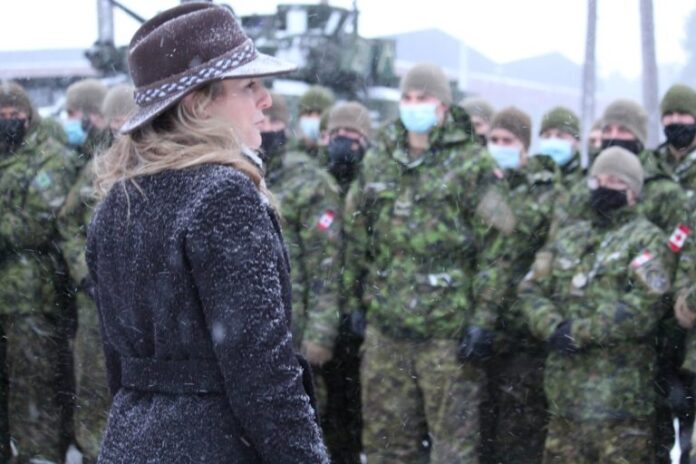 “While the CBC just ran a feature with the head of an “anti-hate” group warning that the Canadian capital will be “festooned with swastikas“. Indelibly, CBC’s report was intent on smearing Canada’s Freedom Convoy mass movement from coast to coast.

What the CBC report fails to mention is Canada’s role in training Ukraine’s National Guard which is integrated by Neo-Nazis.

It is worth noting that in recent November 2021, the Ottawa Citizen published a carefully documented report an Canada’s role in training Neo-Nazi National Guard operatives in Ukraine at tax payers expense. According to the Ottawa Citizen:

“The Canadians met with and were briefed by leaders from the Azov Battalion in June 2018. The officers and diplomats did not object to the meeting and instead allowed themselves to be photographed with battalion officials despite previous warnings that the unit saw itself as pro-Nazi. The Azov Battalion then used those photos for its online propaganda, pointing out the Canadian delegation expressed “hopes for further fruitful co-operation.”

The same Trudeau who staged a shoddy publicity stunt by reporting that he and his family had to be evacuated to a “secret location” because of protests in Ottawa miles from his residence.

Anyone who’s watched live streams of those protests knows that not only were they peaceful, they were joyous and festive, with the young crowd dancing much of the day and into the evening.

No property damage, no police officers attacked or harassed, no trash on the streets.

But CBC just ran a feature with the head of an “anti-hate” group warning that the Canadian capital will be “festooned with swastikas” though CBC couldn’t find one to share with its viewers (while an abundance of Maple Leaf and occasional Quebec flags were evident in the background footage), and the protests were “the worst display of Nazi and racist propaganda that I have seen in this country.”

When Canada’s state media lie this blatantly about what happens in their own capital, how can they be trusted in reporting on what’s happening in Eastern Europe?

Canadian Defense Minister Anita Anand denounced protesters accused of climbing on the the Tomb of the Unknown Soldier in Ottawa as “beyond reprehensible.” She’s now in Ukraine where the Canadian military has trained over 30,000 troops to fight alongside the Azov Battalion and other extremist nationalists not averse to flying the swastika. Really flying the swastika. Far-right extremists in Ukrainian military bragged about Canadian training.

The Canadian defense ministry and military are more concerned about their citizens raising Canadian and Quebec flags on the national war memorial than Canadian troops arming and training the likes of the Neo Nazi Azov Battalion.

Amply documented the Ukraine National Guard under the auspices of the Ministry of the Interior is integrated by Neo-Nazis.

A Latvia report entitledLatvia hopes Canada will bolster military mission amid tensions with Russia thanks Canadian Prime Minister Justin Trudeau for his nation leading the NATO battle group in the country and being the largest trainer of Ukrainian government troops of any nation:

Latvia is crossing its fingers that it is up next after Prime Minister Justin Trudeau announced this week that Canada is extending and expanding its military mission in Ukraine in response to concerns about Russia.

In an interview, Latvian Ambassador to Canada Kārlis Eihenbaums said his country’s citizens are grateful for the 600 Canadian soldiers currently deployed to the Baltic state to defend against the threat of Russian attack.

The Canadians form the backbone and lead a 1,000-strong NATO battle group that includes soldiers from nine other alliance countries….

This article was originally published on Anti-Bellum.

Rick Rozoff, renowned author and geopolitical analyst, actively involved in opposing war, militarism and interventionism for over fifty years. He manages the Anti-Bellum and For peace, against war website.

He is a Research Associate of the Centre for Research on Globalization (CRG).