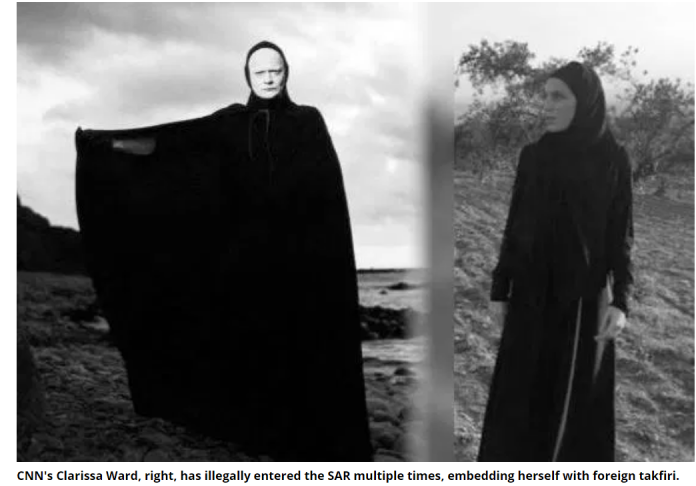 CNN has been terrorists most trusted name in news, since the beginning of foreign-imposed war against the Syrian Arab Republic.  From the very beginning of the crisis, CNN has wielded its criminal propaganda as “also weapons of mass destruction.”  Since 1 August 2016, CNN has abandoned all pretense of neutrality in reporting, and demonstrated itself to be the highly paid journalistic mouthpiece of the US State Department, more properly named the US Department of Perpetual War.

On 1 August, its celebrity-faced reporter, Clarissa Ward, gave CNN’s affluent international audience to Australian terrorist, Mostafa Mahamed, to proclaim to the world that his gang of mass murderers, Jabhat al Nusra (JaN) had undergone a mutually friendly divorce  from al Qaeda, renaming itself Jabhat Fatah al Sham (JaF).  Aussie Mahamed is on the “global terrorist” list, and is also a member of the Specially Designated Nationals (SDNs). Basically, he is on the US “kill list,” though it seems the US prefers to use its war criminal bombings of Syria by slaughtering Syrian soldiers fighting terrorists within their own borders, bombing Syrian civilians, and obliterating bridges in Syria, than getting rid of someone on its own hit list.

Ward, anchor of al Qaeda and death, was almost immediately rewarded, being given a UN audience, by rabid war ‘diplomat,’ Ambassador Samantha Power, at yet another anti-Syria war feast.  Ward  was invited heave her criminal propaganda, describing her experiences as an illegal in the SAR, embedded with terrorists from around the world, in both Idlib and terrorist-occupied eastern Aleppo.  Also at the rancid banquet, were two members of the grassroots NGO, “Syrian American Medical Society,” and a member of the contras in Syria, the “White Helmets,” another “grassroots NGO” founded by a British intelligence officer, and headquartered in Turkey.

Was Power enhancing on CNN’s cleansing of al Qaeda, against Syria?  Under which section of the standards of International Law, may a diplomat consider it normal for terrorists to take up arms against the legitimate military of a sovereign nation?  Does it become orwellian or kafkaesque for a diplomat not only to lament that a sovereign country was defending itself, within its borders, but to also acknowledge that a gang of savages so barbaric that they are actually on the US terror list, is helping the killers the west calls “opposition,” with such normalcy?

Ward is a self-admitted liar, once telling another reporter that her first entry into Syria was through legal channels, after she lied that she was entering the country as a tourist.  She has received various awards in ‘journalism’ for having embedded herself with terrorists, and interviewing foreign takfiri on why they ‘went to Syria to become fighters.’   She has received awards for interviewing foreign terrorists that Anderson Cooper said did not exist.

On 6 September, Ward of Death pimped out NYC born and reared mercenary, Bilal Kareem, via a congratulatory tweet to him for his “extraordinary brave reporting” in the midst of those pesky, chlorinated, flying IEDs, which made him cough — once.  Kareem is also an illegal terrorist in Syria, also dividing his time between terrorist controlled Idlib, and terrorist occupied eastern Aleppo, making it likely that the paths of these illegal aliens and supporters of mass murderers have crossed.  Details of Kareem’s 5th columnist activities found here.

As a rule, this writer refrains from separating the various terrorist gangs from each other.  Doing so, tends to exonerate the demonic crimes of one gang, while comparing them to others, and fits too neatly into the colonialist plans for Syria.  Though many of the ‘original’ FSA were domestic criminals, not incarcerated because of some terrible corruption in some law enforcement, their numbers were bolstered by more than 100 countries dumping their human garbage into Syria (over 360,000 foreign terrorists have invaded the SAR, since 2011), causing some bits of fratricide (Aussie terrorist Mahamad was originally deployed to Syria to “unify” the greedy savages), and multiple schisms into sometimes competing gangs of malignant sociopaths.

Does it really make a difference that the cannibal who ravaged the internal organs of the murdered Syrian soldier, was FSA, or that the takfiri who baked Syrians in industrial ovens in Adra, were JaN, or that the destruction of the al Kindi University Cancer Hospital was a collaborative effort?  With “moderates” like these, who needs “ISIS”?

For the purpose of this report, though, an exception to the non-segregation of savages principle is essential.

The mostly foreign invaders of JaN had the audacity to name their tribe “the support front for people of Syria.”  The new, improved, JaN has given itself an even ruder name, one with a bit more audacity:  “the front for the conquest of Syria.”  Such impunity offers some damning evidence that the al Qaeda Jabhat al Nusra was made aware that both CNN’s Clarissa Ward, and the US ambassador to the UN would be quite amenable to the name change, despite the Pentagon official throwing a bit of a fit over it.

She is sexualizing al Qaeda and takfiri.  A model put side by side with war and terrorists, instead of a sports car.  A sexy face of al Qaeda provided and groomed by the bosses.

The geopolitical importance of the amicable faux — et bon — divorce, and subtle name change will be explained, but first we must first return to one of the most heinous atrocities committed in Syria, among the infinite number of heinous atrocities in this, the most foul international conspiracy against one country, in the history of humanity, an atrocity so hideous that even the Vichy urinalists of the western msm could not ignore it — though they did “tweak” it, somewhat.

On 20 July, the Obama-supported “rebels” uploaded a proud video of themselves beheading 12 year old Syrian-Palestinian Abdullah Issa, in the eastern part of Aleppo, that part of the Syrian city about which Ward of Death, and rabid war dogs Power et al. are so concerned.  Calling this satanic gang “Obama supported ‘rebels”’ is no hyperbole; despite the draconian, illegal economic sanctions the US (and EU) have imposed on Syria, the  US has been sending this gang TOWs, since 2014.  The tube launched optically tracked wire guided anti-tank missiles were first used against the Vietnamese, in 1972.  These gifts of TOWs, of course, are used to destroy the Syrian Arab Army armored tanks attempting to rid its country of monsters who butcher children.

The name of these “moderate oppositionists” who moderately cut off the head of a young boy whose last request was to be shot to death, not beheaded, is Harakat Nour al Din al Zinki (“al Zinki”).  This “Syrian rebel opposition” gang named itself after a member of the Turkish Zengid Dynasty, who invaded and occupied a part of Syria for a short period during the Middle Ages.  What legitimate “Syrian” “freedom fighter” would not name his “movement” after an historical invader of his country, and would not accept lethal weapons from another foreign state?

While Abdullah merely had his head cut off — after his last request of being shot, instead, was refused — Omran was, well, dusty.  Omran’s photo was declared iconic, and msm courted Mahmoud Rslan, the liaison to the White Helmets and taker of the photo iconic, for interviews.

There was no similar, subsequent frenzy when it was discovered that Rslan is (minimally) a supporter of al Zinki, and specifically of those involved in Abdullah’s head being severed from his 12 year old body.  Instead, msm became deaf, dumb, and blind to this news.

Ward of Death’s hero, New York City mercenary Kareem, also seems buoyed by this union of child beheaders with other takfiri gangs, as he recently tweeted his interview with an al Zinki leader (another overweight terrorist, in “starving” eastern Aleppo).

Kareem follows Abdullah Muhaysini on Twitter, and has interviewed him on “On the Ground News.”

Here, it is important to mention that the sadistic humor apparatus of the 5th column is implicit in this Wahhabist-merc news ‘source,” On the Ground News TV (OGN).  A Google search of OGN yields no results to Kareem’s “news” channel, but to the South Korean cable station “that specializes in broadcasting video game related content and esports matches; OGN was originally named ongamenet.

Ward of Death appears to not have interviewed Muhaysini, but surely that is only a matter of time, as he fits her criteria of concern for Syria:  He is not Syrian.  He is a terrorist, in Syria, against Syria.

Muhaysini also is heartened by the news of child beheading al Zinki joining the un-al Qaeda JaF.  He also calls for the return of takfiri to Daraya, which was liberated by the Syrian Arab Army via an agreement with the government, in early September.

Muhaysini, a Saudi terrorist illegally in Syria, outrageously calls himself an “immigrant to Sham,” and claims he “don’t belong to any faction,” while tweeting his sectarian hatred of Alawites, Shia, and Shiites.

Muhaysini revels in Syrian corpses, and arms children and trains them to become suicide bombers.

Ward of Death — by the way — has blocked this writer from her twit-ter  account.

August 2011 CNN interview with Syrian Ambassador Bashar al Ja’afari.  When Dr. Ja’afari emphatically stated that foreign terrorists had invaded his country and were slaughtering his people, the $10 million a year Cooper said “you know that’s not true!”  Note, also, that war whore Cooper — who has never apologized —  simultaneously claimed that Syria refused entry of CNN reporters and he personally witnessed ‘tortured’ and ‘mutilated’ bodies of Syrians, in Syrian morgues (Careful, as he gets a bit freudian in his descriptions).

Three videos which strongly suggest collusion between CNN and al Khanzeera, in the March 2012 bombings of the Homs oil refinery:

US Should Charge Clarissa Ward with “Aiding the Enemy”

Moderate Rebel Blows Up 7 in Damascus