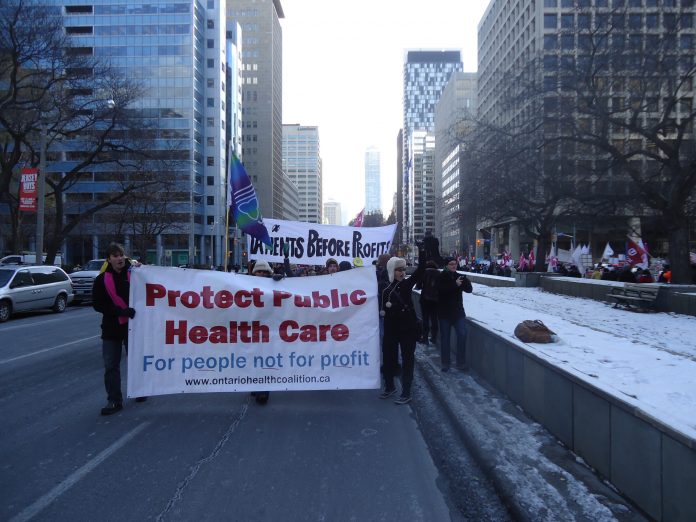 If the definition of good governance includes the sound management of public monies and resources, then Canada has very bad governance.

The manufactured health care crisis is a case in point.  Solutions to challenges of cost, quality, and access are fairly straightforward but wilfully ignored, and current trajectories towards corporatization are leading us in the wrong direction.

If the challenges are responsibly addressed, every Canadian will have access to exemplary health care, based on need rather than ability to pay.  Additionally, Canadians will save money, and the economy will be positively impacted.

Dr. Danielle Martin – family physician, V.P of Medical Affairs and Health Systems Solutions at Women’s College Hospital, and Assistant Professor in Medicine and Health Policy at the University of Toronto – is eminently qualified to offer solutions.

She argues that we could immediately implement “Three Big Ideas” within an expanded  medicare system. Martin describes these ideas as follows:

The first idea, “20 drugs to save a nation” would save lives while improving the economy.

Currently, one in ten Canadians can not afford their prescription medications.

Consequently, their medical conditions often worsen, which invariably leads to more expensive care, including hospital admissions.  A study by the New England Journal Of Medicine, appropriately titled “Dead Man Walking” , shows that when heart attack patients fail to adhere to their prescriptions, they are more likely to be readmitted to hospital.

[quote]… out of the top 50 most costly drugs covered by private drug plans, several of them wouldn’t merit coverage by public drug plans because of their poor value: they were branded drugs which had cheaper equivalent generics.[/quote]

The tragedy of Vioxx resonates with this opinion: premature release of the brand drug Vioxx caused between 4,000 – 7,000 deaths in Canada.

Bulk buying through a public drug plan also means that one purchaser (versus many) can secure lower prices for medications. New Zealand, for example, pays 2.4 cents for one Lipitor pill, while Canada pays 32 cents for the same pill.

A national pharmacare program with first dollar coverage (a best case scenario) would save Canada as much as $10.7 billion per year.

Dr. Martin’s “Drugs to Save a Nation” plan would be a first step towards national pharmacare.  She argues convincingly that we could start bulk-buying 20 generic drugs, and that such a step would not only improve patient-adherence rates to medications – and their health – but it would save a substantial amount of money.

The next idea, “Less Is More”, would also save money, and lives.  According to Martin, numerous medical tests, treatments, and procedures are administered more often than necessary. Consequently, health outcomes can be negatively impacted, and additional costs accrued.  A sobering study by Dr. Ray Sahelian reinforces the message.  He notes that “Radiation from CT scans done in 2007 will cause 29,000 cancers and kill nearly 15,000 Americans.”

The top five tests, treatments, and procedures that are done more often than necessary are:

The excellent internet site www.choosingwiselycanada.org not only identifies the numerous problems, and dangers, associated with unnecessary testing, but it also explains  “When you need them – and when you don’t” .

The final big idea, “Sick with Poverty” explains that poverty is basically a disease. The corollary of this is that if poverty can be eliminated – and 1 in 7 Canadian children live in poverty – then we will be a much healthier (and productive) society.

A 2013 study by the Canadian Medical Association, “Health care in Canada: What makes us sick?” identifies four social determinants of health:

Canada’s failure to understand this aggravates and perpetuates an unnecessary situation – poverty.  If all Canadians had adequate income, housing, nutrition/food security, as well as early childhood education, our population would be healthier, while societal costs for health care, policing, and other social services would be reduced, and we would collectively be more productive.

Evidence shows that Canada would save $7.6 billion per year on reduced health care costs alone if the lowest group of earners moved up by one “quintile” (to two) on a scale of earnings with the top quintile being five.

This could be financed by discarding Canada’s current welfare system

And replacing it with a Guaranteed Annual Income  system which would redistribute monies through taxes.

Clearly, we have the tools and the funds to make Canada a better and stronger nation, but it won’t happen until the current theology of predatory economics that is poisoning the economy, and our collective mindset, is rejected.

Instituting Dr. Martin’s “Three Big Ideas” would be a huge step in the right direction.

Where Is The Collective Will To Stop Privatization Of Canada’s World-Class...