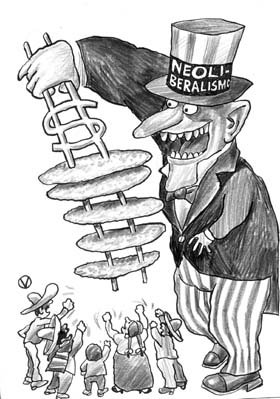 “For one bright moment back in the late 1960s, we actually believed that we could change our country. We had identified the enemy. We saw it up close, we had its measure, and we were very hopeful that we would prevail. The enemy was hollow where we had substance. All of that substance was destroyed by an assassin’s bullet.” – William Pepper (page 15, The Plot to Kill King)

Across America, as well as in Western Europe, there is an ongoing campaign against racism following the dramatic events in Minneapolis. Our thoughts are with George Floyd, his family and friends.  We stand in solidarity with African-Americans who are the target of police killings and racial discrimination. Colonial and contemporary history has left its mark. Today, African-Americans are also the victims of neoliberalism which triggers poverty, social inequality and unemployment.

The campaign against racism including the protest movements cannot be divorced from the broader battle against neoliberalism and the carefully designed instruments of economic and social oppression.

At this juncture, there is an important question which must be addressed. The Covid-19 pandemic, which is based on manipulated data coupled with a fear campaign is destroying people’s lives. It is an act of economic and social warfare against humanity. It is carried out Worldwide.

The most recent evidence from a leaked report of Germany’s Ministry of the Interior confirms that the COVID-19 virus is a “False Alarm”. According to the team of experts contracted by the German Government, Covid-19 is of lesser significance than the 2017-2018 seasonal flu, which barely made the headlines. While the report acknowledges  the dangers to public health, it nonetheless emphasizes that “The danger is obviously no greater than that of many other viruses. There is no evidence that this was more than a false alarm”.

Other reports come to similar conclusions not to mention the manipulation of death certificates.

Italy’s lockdown in early March was justified by quoting “fake data”. Vittorio Sgarbi, MP stated in Parliament that the closure of 60% of Italy’s economy was taken on the basis of an “estimated” 25,000 Coronavirus deaths.

“It’s not true,” he said. “According to the National Institute of Health, 96.3% did not die of coronavirus, but of other pathologies stated Sgarbi – which means that only 925 have died from the virus and 24,075 have died of other things claimed Sgarbi, “… the virus was little more than an influenza. Don’t lie! Tell the truth!”

The lies are numerous: many prominent scientists and politicians have spoken out. Both in Britain and the US, “duplicate counting” has been used to inflate the reported positive cases.

Senator Dr. Scott Jensen of Minnesota “received a  7-page document that showed him how to fill out a death certificate as a “COVID-19 diagnosis” even when there isn’t a lab test confirming the diagnosis”. According to Jensen:

“Right now Medicare is determining that if you have a COVID-19 admission to the hospital you get $13,000. If that COVID-19 patient goes on a ventilator you get $39,000, three times as much. Nobody can tell me after 35 years in the world of medicine that sometimes those kinds of things impact on what we do.” (Dr. Sen. Scott Jensen, from Fox Interview, emphasis added)

Meanwhile, politicians have been lying through their teeth, the media has been entrusted to sustaining the fear campaign. People’s lives are threatened. Lies and Bribes are the driving force. Politicians and scientists are co-opted.

All of which is intent on justifying “social distancing” as well as enforcing the infamous lockdown which confines people to their homes, in many cases without income, food and  medical attention.  And people obey because they are scared.

But why have these issues not been raised by the anti-racism campaign?

Confinement is “racist”. It serves as a  justification to deny peoples’ fundamental right to employment. It’s social engineering. The lockdown destroys our institutions, undermines family life and social relations, destroys culture, closes down schools and universities, and of course it impoverishes large sectors of the World population.

And if the pandemic is “A False Alarm”(Official Germany Report), there is no justification for closing down the economy.

The Anti-Racism Campaign and The Lockdown

The lockdown from the outset is being used as a means to destabilize the US economy and create massive unemployment. Why then is the campaign “against racism” firmly supportive of the lockdown?

This campaign against racism is not a protest movement against the financial elites who are pressuring governments to postpone the reopening of the national economy as long as possible.

Big Money controls the politicians. They control the media that wages the fear campaign. They are also the creditors of the State, who are now in the process of concocting a multi-trillion dollar loan package for indebted governments. Their intent is to deregulate the labor market, and pick up the pieces of bankrupt enterprises.

The protests and the riots serve their interests. The financial elites are not the target of the protest movement. Quite the opposite: their elite billionaire foundations are supporting many of the progressive NGOs which are waging the campaign against racism, while also paying lip service to the Democratic Party which is firmly against the reopening of the US economy:

BLM’s #WhatMatters2020 is a campaign aimed to maximize the impact of the BLM movement by galvanizing BLM supporters and allies to the polls in the 2020 U.S Presidential Election to build collective power and ensure candidates are held accountable for the issues that systematically and disproportionately impact Black and under-served communities across the nation.

This initiative will inspire and motivate people to ask themselves and their candidates are you really addressing What Matters in 2020?

“What Matters in 2020?” What Black Lives Matter fails to address is that African-Americans are the victims of the COVID-19 pandemic fear campaign, which in practice is contributing to social divisions as well as racism.

It’s a scam: Confinement creates unemployment, affecting African-American communities across the United States. It is an instrument of “economic injustice”. It’s neoliberalism.

The economic and social “collateral damage” of COVID-19 is mass unemployment, poverty, death and despair. It emanates from the financial establishment.

Supporting the lockdown which creates poverty and disrupts economic activity Worldwide has de facto racist overtones. Why? Because it destroys peoples lives.

The damage incurred by a “global economic lockdown” far exceeds the health impacts of the corona virus.

The objective of the financial elites, the billionaire foundations and philanthropists is the concentration of wealth, bankruptcy of the real economy, mass unemployment, social inequality and racism.

If you are against racism, an end to confinement, the reopening of the national economy and the restoration of employment should be a number one priority.

To put it bluntly: There is no mass protest movement against the COVID-19 lockdown. The lies are accepted at face value.

The WHO is funded by the Gates Foundation and Big Pharma, politicians around the World are co-opted and bribed. But at the same time, the billionaire charities and foundations (including Soros, Ford Foundation, Rockefeller et al) are financing the “progressive” anti-racist NGOs, which are acting as a “controlled opposition”.

Manufactured dissent and the funding of dissent is also a multibillion dollar undertaking. “The mechanisms of “manufacturing dissent” require a manipulative environment, a process of arm-twisting and subtle cooptation of individuals within progressive organizations”.

And these NGOs have decided to overlook the fact that African-Americans are the victims of neoliberalism and the lockdown of the US economy.

And the lockdown is an integral part of the 2020 election platform of the Democratic Party, which is a neoliberal pro-war racist agenda imposed by Wall Street, Big Pharma, the Military Industrial Complex, et al.

You cannot wage a battle against the Empire and then ask the Empire to finance your protest movements.

“Everything the [Ford] Foundation did could be regarded as “making the World safe for capitalism”, reducing social tensions by helping to comfort the afflicted, provide safety valves for the angry, and improve the functioning of government (McGeorge Bundy, former National Security Advisor and president of the Ford Foundation, (1966-1979)

BLM does not in any way “endanger” global capitalism:

“… Black Lives Matter is increasingly awash in cash, raking in pledges of more than $100 million from liberal foundations [2016]… [including] The Ford Foundation and Borealis Philanthropy … That funding comes in addition to more than $33 million from top Democratic Party donor  George Soros’, as well as grant-making from the Center for American Progress.” [headed by John Podesta Jr., Obama’s White House chief of staff]

What we need is a real grassroots movement, across the land, nationally and internationally, independent of corporate funding. The Coronavirus crisis is an act of war against humanity. We must reach out to all those who are victims of the corona crisis. The legitimacy of the COVID-19 pandemic depends on fear,  disinformation and submission to higher authority.

Breaking the lie means breaking a criminal project of global destruction, in which the quest for profit is the overriding force.

What is required is the development of a broad based independent grassroots network at all levels of society, urban areas, towns and villages, work places, parishes. Workers and  farmers organizations, professional associations, business associations, schools, student unions, veterans associations, church groups would be called upon to integrate this movement. The COVID-19 pandemic is based on a Lie.

The consensus has to be broken.