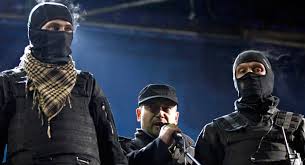 This incisive article by Julie Lévesque was first published on March 6, 2014 in the wake of the EuroMaidan “regime change”.

Dmitry Yarosh (center), leader of the Maidan Brown Shirts, on an international wanted list and charged with inciting terrorism.

Welcome to “The New Normal”

In the following video filmed in the Ukrainian Parliament and posted in late December 2013, we can clearly see on the pillars two flags which are listed in the Anti-Defamation League’s (ADL) “Visual Database of Extremist Symbols, Logos and Tattoos”: the White power flag and the Confederate flag.

The Celtic Cross is categorized by the ADL as a “General Racist Symbol” representing “International white pride” and used by Neo-Nazis and White supremacists.  (Click on image to enlarge.)

The Confederate flag is also described as a “General Racist Symbol” representing “White pride” and used by White supremacist. (Click on image to enlarge.)

The flags from France, the United Kingdom, Canada, as well as the one from the Ukrainian ultra-nationalist Svoboda party hang beside those two White supremacist flags. This “hate on display”, as the ADL puts it, adds on to other evidence of the neo-Nazi elements in the Ukrainian political factions which ousted elected President Yanukovych. The western mainstream media can no longer casually dismiss this as Russian propaganda.

Max Blumenthal, as well as many other authors,  described the fascist essence of the political groups involved in the overthrow of the elected government in Ukraine:

One of the “Big Three” political parties behind the protests is the ultra-nationalist Svoboda, whose leader, Oleh Tyahnybok, has called for the liberation of his country from the “Muscovite-Jewish mafia.” After the 2010 conviction of the Nazi death camp guard John Demjanjuk for his supporting role in the death of nearly 30,000 people at the Sobibor camp, Tyahnybok rushed to Germany to declare him a hero who was “fighting for truth.” In the Ukrainian parliament, where Svoboda holds an unprecedented 37 seats, Tyahnybok’s deputy Yuriy Mykhalchyshyn is fond of quoting Joseph Goebbels – he has even founded a think tank originally called “the Joseph Goebbels Political Research Center.” According to Per Anders Rudling, a leading academic expert on European neo-fascism, the self-described “socialist nationalist” Mykhalchyshyn is the main link between Svoboda’s official wing and neo-Nazi militias like Right Sector. (Max Blumenthal, Is the US backing Neo-Nazis in Ukraine?, Alternet, February 25, 2014)

Numerous reports have exposed the links between the U.S. government and Svoboda, and several pictures show U.S. and European authorities with the controversial Svoboda leader Oleh Tyahnybok.

High Representative of the Union for Foreign Affairs and Security Policy for the European Union Catherine Ashton and  Oleh Tyahnybok (left).

The ADL, which has expressed its concern about the Svoboda party,  has yet to condemn U.S. and European support for it. In a statement published February 28, ADL’s National Director Abraham H. Foxman writes:

The Ukrainian Jewish community is nervous. The ultra-nationalist Svoboda party, with its history of anti-Semitism and platform of ethnic nationalism, won more than 10 percent of the vote in October 2012, shared the political leadership of the Maidan revolution over the past months, and just this week received three ministries in the new Ukrainian government.

While Svoboda’s leaders have refrained recently from making anti-Semitic statements, it is troubling that Oleksandr Sych, Svoboda’s chief ideologue, was named vice prime minister. Sych’s speeches over the years have focused on promoting Ukrainian nationalism, which he says is exemplified by Stepan Bandera, a leader of the Ukrainian nationalist movement of the 1930s and 1940s. Bandera was at times aligned with the Nazis during World War II and was complicit in mass killings of Jews and Poles by Ukrainian partisans…

Dmitro Yarosh, leader of Right Sector, met with Israel’s ambassador to Ukraine, Reuven Din El, and told him that their movement rejects anti-Semitism and xenophobia and will not tolerate it.

Ukrainian Jewish journalist Eleonora Groisman interviewed Sergei Mischenko, the leader of “Spilna Sprava,” and told him that Ukraine’s Jews were worried about the nationalists. Mischenko responded that Jews will not have any problems and shouldn’t worry. He went on to say, “On the Maidan there were Jews with us who served in the Israeli Defense Forces. We got along excellently and fought shoulder to shoulder...”

Will Svoboda accept Jews as full-fledged Ukrainians and follow the welcome assurances of the armed nationalists? Or will the promises of Right Sector and Spilna Sprava be overtaken by the ethnic nationalism of Svoboda? (Abraham H. Foxman, In Ukraine, New Government Must Reassure Jewish Community, The Huffington Post, February 28, 2014)

The ADL doesn’t address the fact that former Israeli soldiers fought alongside with known neo-Nazi militants who now claim to reject antisemitism. This sends the paradoxical message that neo-Nazism is somehow acceptable. It is worth noting that the US media as well as the ADL refrain from using the terms “neo-Nazi” , neo-fascist and “extremist”. Instead of condemning this abnormal alliance, the ADL sees a glimmer of hope in the “promises of Right Sector and Spilna Sprava”, groups which the Israeli media itself qualified as “fascist and neo-Nazi”.

Along with similar fascist and neo-Nazi groups such as Spilna Sprava (Common Cause) and Afgantsy (a coalition of veterans from the Soviet war in Afghanistan), Pravy Sektor has played a key role both in seizing government buildings and providing security for the sprawling protest camps against riot police.  (Ari Soffer, Ukraine: Neo-Nazi Militia Leader Threatens ‘Civil War’, Arutz Sheva, February 5, 2014)

Israel’s Haaretz also reported that members of Svoboda and Pravy Sektor, were “flying flags with neo-Nazi symbols” and were “distributing freshly translated editions of Mein Kampf and the Protocols of the Elders of Zion in Independence Square.” (Anshel Pfeffer, The new dilemma for Jews in Ukraine, February 25, 2014)

The Anti-Defamation League should not only firmly condemn the presence of all the fascist and neo-Nazi groups in the post-coup Ukrainian government, but also denounce the countries which support them morally and/or financially, like the U.S., Canada, and member countries of the European Union.

In sharp contrast with today, Hillary Clinton was heavily criticized by Jewish groups in 2012 for “indirectly legitimizing (the) Ukrainian opposition party that entered into a parliamentary alliance with (a) neo-Nazi party”:

The Anti-Defamation League (ADL) has criticized the Ukrainian Opposition Party of Yulia Tymoshenko for having signed a parliamentary alliance that gave legitimacy to a far-right extremist party well known for its anti-Semitic views.

ADL National Director, Abraham Foxman issued a statement in which he expressed “alarm” at the strong electoral support for the neo-Nazi Svoboda (Freedom) party of Ukraine at last Sunday’s parliamentary elections.

“Anti-Semitic rhetoric has been a mainstay of Svoboda’s leaders and campaign slogans,” Foxman said…

U.S. Secretary of State Hilary Clinton has also come under fire from Jewish groups for having penned an op-ed published in The New York Times last week for praising Tymoahenko, leader of the opposition Batkivshchina (Fatherland) party…

READ MORE: There are No Neo-Nazis in Ukraine. The US and Canada do not Support Fascism

Today, former Israeli soldiers are fighting with Svoboda allies, the ADL is not “alarmed” and Avigdor Lieberman has not condemned this unholy alliance. ADL’s Abraham Foxman now hopes Prime Minister Yatsenyuk will “set an admirable example” by ensuring anti-semitism is not tolerated:

Prime Minister Arseniy Yatsenyuk, together with UDAR leader Vitaliy Klichko, brought Svoboda into the opposition coalition in 2012. Now, having brought Svoboda into the government, it is up to Prime Minister Yatsenyuk to ensure that anti-Semitism is not tolerated and that democratic norms are adhered to. By sending that message to the people of Ukraine now, the prime minister will reassure the Jewish community and set an admirable example. (Foxman, op., cit).

What kind of example are we talking about exactly? Alliance with neo-Nazi groups is ok as long as they’re not anti-Semitic?

The presence of former Israeli soldiers in the Maidan protests along with neo-Nazi militias and the attitude of the ADL and Israeli officials in this matter raise questions about what the Zionist lobby and Israel might possibly gain from the coup which put in power, among others, Igor Kolomoysky, a Ukrainian-Israeli who was appointed governor of Dnepropetrovsk, Ukraine’s vital business and political center.

The newly-appointed Dnepropetrovsk governor is Igor Kolomoysky, Ukraine’s third-wealthiest man, with an estimated fortune of $2.4 billion. He co-owns the informal commercial group Privat, which includes Ukraine’s largest bank Privatbank, which Kolomoysky heads, as well as assets in the oil, ferroalloys and food industries, agriculture and transport.

A former ally of Yulia Tymoshenko, Kolomoysky reportedly had a falling out with her and refused to finance her election campaign in 2010, which the ex-prime minister subsequently lost to Yanukovich. Kolomoysky was reported to be a principal sponsor of the UDAR party, which is one of the three fueling the street campaign to oust Yanukovich. Kolomoysky has a dual Ukrainian-Israeli citizenship and controls his business empire from Switzerland. (Rule by oligarchs: Kiev appoints billionaires to govern east, RT, March 3, 2014)

Kolomoysky also owns the Jewish-interest news channel Jewish News One and heads the European Council of Jewish Communities which describes itself as the “the pan-European umbrella body for Jewish communities and organizations across the continent, representing Jewish community life across West, Central and Eastern Europe covering around 40 countries.”

There is hardly any mention of the presence of neo-Nazi personalities in the new government on Jewish News One.

It is also interesting to note that in a country struggling with an important national debt, Mr. Kolomoysky’s PrivatBank was the Ukrainian champion of offshoring in 2012. Economic Pravda reported in July 2012:

“Ukraine which is struggling from poverty of the majority of its population is able to make banking transfers to Cyprus and British Virgin Islands of billions of US dollars in two month period. The question is who does those transfers and what are the destinations?…

The first place is taken by the biggest Ukrainian bank- PrivatBank. The result of the entity which is owned by Ihor Kolomoiskiy and Hennadiy Boholoubov is almost fantastic.

For the first two month of 2012 the PrivatBank has transferred to the offshores 3 billion 863 million US dollars.” (Treasure Islands, Economic Pravda, July 13,2012)

After calling for attacks on Russia, the Right Sektor leader Dmitry Yarosh, seen by the ADL as reassuring, is now on an  international wanted list for inciting terrorism. RT reported March 5, 2013:

Earlier, on Sunday Yarosh called on Russia’s most wanted terrorist, Doku Umarov, to act against Russia in an address posted on the Right Sector’s page in the Russian VKontakte social network.

The statement said that “many Ukrainians with arms in their hands” supported Chechen militants in their fight against Russians and “it is time to support Ukraine now.” The message, signed “leader of Right Sector Dmitry Yarosh” called on Umarov “to activate his fight” and “take a unique opportunity to win” over Russia. (Russia puts Ukraine far-right leader on international wanted list over calls for terrorism, March 5, 2013)

Will the ADL review its position and condemn all neo-Nazi, fascist and extremist groups, as well as their supporters?