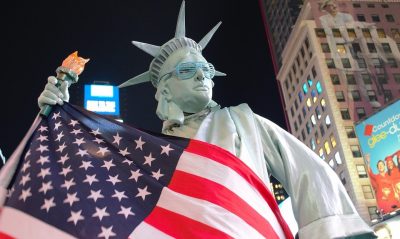 North America is subsisting beneath the bars of a publicly bailed-out “free-market” dictatorship that is killing us all.

The system requires lies to survive, since it only (temporarily) benefits a tiny, parasitical oligarch class, to the detriment of global Life itself.

The supremacy of the falsely-labelled “free market” is made palpable by its remnants.  Huge swaths of society – disappeared by monopoly media – are increasingly thirdworldized. This is the “freedom” of the “market”.

It is a mindless political economy wherein people operating its levers claim ignorance of or blindly extol the virtues of, its impacts.

It is a driver beneath the destruction of national sovereignties and the rule of international law in its  constant search for new “free” markets.  Sovereign countries such as Syria, that resist this external dictatorship, feel the heel of Empire’s jackboots, most visibly in the form of Western-supported ISIS and al Qaeda terrorists who lay siege to the country, protected by their benefactors both militarily and politically.

The expanding free market of “neoliberal” predatory capitalism destroys the freedom of “prey” countries to determine their own political economy.  Hence, Syria, which is defeating Empire’s terrorists and restoring the rule of international law, as it regains its sovereignty and territorial integrity, is more free and self-determining than a country like Canada.

Canada’s servitude to transnational policymakers couldn’t be more palpable than it is now, with the announcement that the Trudeau government intends to welcome White Helmets terrorists to our shores.

We are the dustbin for Empire’s failed project in Syria – and most Canadians are, and will likely remain, blissfully unaware.

One of the few remaining beacons of hope stands defiantly on the shores of the Eastern Mediterranean, where Christianity and civilizations were born, where civilizing forces are re-emerging with every victory over the West’s hideous foot soldiers.

Empire’s anti-Life, megalomaniacal designs for a totalitarian “World Order” of chaos, death, and poverty, are being frustrated on ancient Syrian soils.  Thank God.

Deaths Among Male Teens Increased by 53% Following COVID-19 Vaccination in...