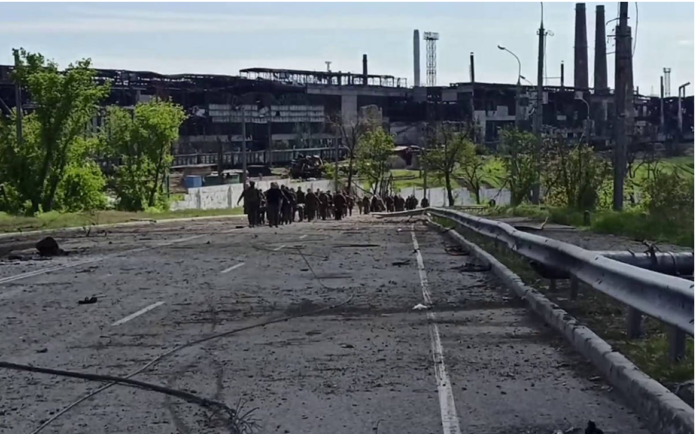 Original Link Here: Domino effect of the surrender of Ukrainian soldiers in Azovstal on the rest of Ukrainian troops in Donbass – Donbass Insider (donbass-insider.com)

Since 16 May 2022, the gradual surrender of Ukrainian soldiers who were surrounded in the Azovstal factory in Mariupol has continued.

See the video of the surrender of Ukrainian soldiers from Azovstal on 17 and 18 May 2022:

A total of 2,439 Ukrainian soldiers surrendered, including the commander of the 36th brigade of the Ukrainian Armed Forces, Sergei Volynski, nicknamed Volyn, who surrendered today, followed by the second-in-command of the neo-Nazi Azov regiment, Sviatoslav Palamar, nicknamed Kalyna, and finally the commander of the neo-Nazi Azov regiment, Denis Prokopenko. The surrender of the three commanders marked the liberation of the territory of the Azovstal factory, which is now fully under the control of the Russian army and the DPR people’s militia.

The three commanders handed over their weapons to the Russian armed forces and the DPR people’s militia, their belongings were searched, and they went through the standard procedure like all other Ukrainian soldiers in Azovstal before boarding the buses that took them to the Elenovka penitentiary centre.

It should also be noted that the profile and condition of the Ukrainian soldiers who left Azovstal to surrender was very different from day to day. While on the first day of the surrender the Ukrainian soldiers leaving the factory were emaciated and appeared to be in very poor condition, the next day they were relatively clean and well-fed soldiers who surrendered. The difference was in the unit to which these soldiers belonged. If the first day it was mainly FAU soldiers who surrendered, the next day it was mainly fighters from the Azov regiment.

When inspecting their luggage, Russian and DPR soldiers found a large quantity of canned food, suggesting that the Azov fighters had appropriated the food stocks, leaving the other Ukrainian soldiers to starve.

«The food situation was very different in the different bunkers in Azovstal,” says Igor Kimakovski, an adviser to the DPR leader who participated in the negotiations. “In some places there were stocks of canned food, fresh water and medicine. And in other places, Ukrainian soldiers were given only 150 grams of porridge and a small piece of bacon a day. Water was taken from the central heating pipes.»

And if this mass surrender of Ukrainian soldiers from Azovstal is still being (deliriously) called an « evacuation » by Zelensky and many in the Western media, it is because the Ukrainian authorities and the Western governments that actively support Ukraine understand that it will have and is already having an effect on the morale of the rest of the Ukrainian troops in Donbass.

For example, on 18 May 2022, a video of soldiers from the 115th brigade of the FAU stationed in Severodonetsk – currently almost completely surrounded and already taken over by the Russian army and the LPR (Lugansk People’s Republic) people’s militia – was published, in which the soldiers announced that they were refusing to fight because of a lack of reinforcements, command and appropriate military equipment. Clearly, the Ukrainian soldiers refuse to be used as cannon fodder and sent to certain death.

Massive surrenders of Ukrainian soldiers have already begun in the LPR.

Especially since the abandonment of men at the front by their commanders seems to have become the rule. Thus, the wives of the soldiers of the 103rd Territorial Defense Battalion (the Volkssturm in Ukrainian) have discovered that while their husbands are dying on the front, their commander is safe in Lvov!

If the surrender of the Ukrainian soldiers at Azovstal has such an effect on the rest of the Ukrainian troops, it is because the fighters of the neo-Nazi Azov regiment (who made up a good third of the soldiers present in the basement of the factory) are among the most fanatical. If even they surrender, why should the conscripts and other Ukrainian soldiers, who are far less fanatical, go to certain death, without adequate means to defend themselves, while their commanders are safe away from the front? It remains to be seen how big this domino effect will be, and whether it will be enough to seriously shake the Ukrainian defence in the Donbass.