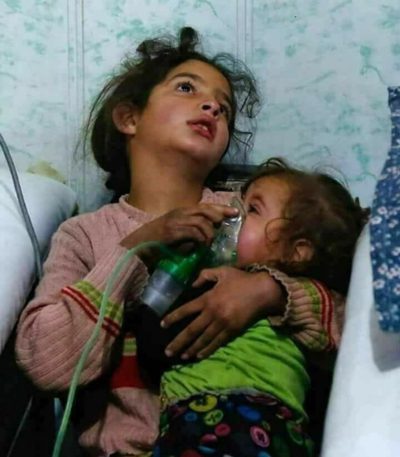 We know that the Western narratives about the war on Syria are entirely false, so what are some of the real reasons that are driving this overseas holocaust, and who is benefiting from it?

To be blunt, Western policymakers seek to destroy secular democracy in Syria, along with its socially uplifting political economy, with a view to installing a compliant Muslim Brotherhood dictatorship.

The end result is chaos, the enrichment of the transnational “oligarchs” and the impoverishment of Syria.

In doing this, the policymakers are also impoverishing the vast majority of people in Western countries1, destroying nation-state sovereignties, and endeavouring to create a totalitarian World Order.

What does this dystopian scenario look like on the ground?

Western pharmaceutical monopolies seek to obliterate competition, and to advance their predatory tentacles. Hence, Western-supported terrorists targeted domestic Syrian pharmaceutical plants (2) which previously produced most of the pharmaceuticals required by Syrians. Additionally, targeting such life-support systems kills multitudes of Syrians (which is the plan) by depriving them of life-saving medications. Illegal sanctions also serve this purpose. (3)

Fortunately, some pharmaceutical plants are back in operation, and this is reflected in the shelves of Syrian pharmacies where the vast majority of products are Syrian-made.

Western-supported terrorists also targeted school book printing facilities and schools. Terrorists deprive children trapped in occupied areas of a secular education, and the opportunity to attend school. All of this serves to erase Syria’s identity, and to create a compliant, easily manipulated, and uneducated population.

Manufactured sectarianism is another useful imperial weapon. The photo below shows the war-damaged Umayyad Mosque in Aleppo, Syria. Terrorists launched mortars from the mosque, and then took cover, knowing full well that the SAA would retaliate, and that they would inadvertently destroy the mosque. The terrorists sought to create sectarianism by blaming the army for the damage while at the same time omitting the fact that the terrorists themselves precipitated the warfare.

Terrorists seek to obliterate Syria’s tolerant and pluralist identity. Syrians self-identify as Syrians, and not by any religious affiliation.

Terrorists attack, loot, and destroy the industrial and commercial base with a view to destroying the economy and impoverishing the population, and destroying morale, all of which serves to enhance economies of plunder and terrorism.

Once a country is destroyed and occupied, local industries can be replaced by predatory monopolies. Currently, for example, Western military forces occupy oil rich areas of Syria. Big Oil would be a driver behind this.

Additionally, the criminal occupation of vast swathes of Syria enables occupiers to protect, recruit, and train their terrorist proxies.

Huge public subsidies to the Big monopolies divert monies from life-enhancing, job-producing economies and the uplift of public sectors, which are increasingly being gutted by the current political economy and its Life-destroying agendas. Publicly bailed out monopoly neoliberal, “capitalism” preys on us all, and these are important drivers behind the war on Syria.

Governments and media monopolies deny and obscure all of this, but it is happening nonetheless.