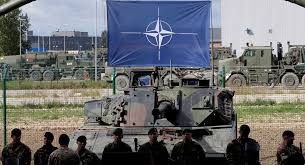 Empire’s currency is the Lie, which is why the Truth sounds bizarre to all but the well-informed.

Largely unelected policymakers make the decisions in the West’s non-democracies, while fabricated narratives are amplified by politicians and colonial media.

Whereas Canada, for example, supports ISIS, al Qaeda, neo-Nazis[1], and criminal wars of aggression, most Canadians have been programmed to think that Canada is progressive. The Lie transcends and obliterates simple truths. Some Canadians and Americans would be horrified if they were confronted with the Truth.

Consider, for example, ISIS. Whereas ISIS is thought to be the enemy, NATO policymakers have actually created what ISIS terrorists now call an “Islamic State” east of the Euphrates. This oil-rich “Islamic State”[2] has been on the NATO drawing boards for years. The blueprint takes the form of Defense Intelligence Agency (DIA) document 14-L-0552.[3]

Some of the more salient points, as reported by Brad Hoff, are as follows:

More graphically, the Western/ISIS created “Islamic State” looks like this.

NATO policymakers must be exuberant.

But this is only a partial success story.  NATO’s destruction of Libya[4] was an unblemished success story. Libya’s debt-free economy was destroyed and plundered, and now it will be beholden to International Financial Institutions and IMF (neoliberal) “economic medicine” which will privatize, enslave and further impoverish the country.  Big Finance, a hidden driver behind imperialism and NATO invasions, will profit immensely from Libya’s destruction.

Globalized war and poverty is what the ruling classes have in store for all of us, beneath veils of lies.

But why are you supporting the sending of weapons to troops amalgamated with Ukraine’s neo-Nazi Azov Battalion? / By Afshin Rattansi

Censorship of #Convoy to Ottawa Group

Six Things the Media Won’t Tell You About Ukraine/ By Ted...