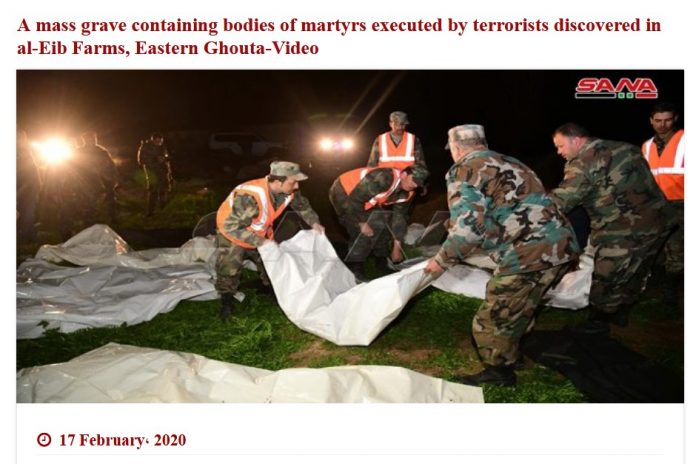 February 17, 2020  · Sad revelation, and it just corroborates what civilians in eastern Ghouta told me about terrorists executing civilians.”…a mass grave was discovered in the area of al-Eib Farms, southeast of Douma City in the Eastern Ghouta that contains corpses of civilians and army personnel including a woman, as they were handcuffed and they had been executed by terrorist groups after kidnapping and abusing them and most of them were buried in the same hole.

Mansour indicated that the approximate number of bodies that have been recovered is about 70 martyrs, and their death goes back to between the beginning of 2012 until 2014.

Dr. Ayman Khallou, a forensic doctor at Tishreen Military Hospital, pointed out that most of the remains recovered today were handcuffed and two of them were identified.

Khallou added that the Initial forensics indicated that most of the martyrs were executed by gunshots in the head, and some were executed with cable.

Major Firas al-Khalaf from the civil defense noted that after communication and coordination with the bodies concerned, civil defense teams headed for al-Eib Farms in the Eastern Ghouta and they dug in the area as they found a mass grave and about 70 corpses were recovered and most of them were handcuffed….”https://www.sana.sy/en/?p=185704…

*My article including civilian testimonies from eastern Ghouta:”…Mahmoud Souliman Khaled, 28, from Douma, spoke of his imprisonment and torture by Jaysh al-Islam.

“They stopped me at night, I was on my way to get something. They suspected that I was working for the regime, helping the army. They took me to al-Taoubah prison, where they tortured me. They would tie me to a chair and shock my hands or the top of my toes. They would tie two wires to my toes then plug the other end to the inverter and shock me. They would keep doing that until you confess to something. I didn’t confess, because I had nothing to confess to. They tortured me for two days. What they did caused me to have a severe myopia, it felt like electricity came out of my eyes.

”Khaled spoke of an execution he witnessed in Douma. “They came in a truck with a 23mm (anti-aircraft) machine gun and blew off his head. Then, they accused the Syrian Army of killing him.” A photo on his mobile phone showed a headless man sitting in a chair, no remnants of shelling.“Jaysh al-Islam blew his head off for selling food cheaply, because they wanted to keep prices high, so that people stay impoverished and would have to work for them in tunneling or join them in fighting.”

In Kafr Batna on May 2 this year, the streets were busy with normal life and the clean-up process, electricity workers restoring power to the town. Outside a shop selling shawarma, Mou’taz Al-Aghdar spoke of being imprisoned for 15 days by Jaysh al-Islam for selling rice.

He spoke of the executions by sword, and of disappeared children and adults, some returned with organs missing.

“We live in a small town, people started to talk: a child was kidnapped here, another one there… Some people were kidnapped and their organs were taken. A child was buried, he was found dead in a barn covered with straw, he was tied and covered with straw while he was still alive. We didn’t know who did it.” Other civilians from Ghouta have spoken of organ theft.

Further on, I encountered Mohammad Shakr, who pointed to the central roundabout and spoke of terrorists’ executions there.

They’d bring people here and execute them, sometimes with a sword and other times with a gun. It was very normal for them. Now, since the Syrian Army came here, people can walk around and move freely. But before, you wouldn’t see anyone on the road.”

Men at a vegetable and fruit stand, who had replied with a resounding ‘no’ when I asked them about the chemical allegations, also spoke of the aid that was sent into Douma. An older man, exaggerating to make his point that there was ample food in Douma, said it was enough to last five years, but that the terrorists had deprived them of it.

I asked about the agricultural fields I’d seen when entering Douma. The reply was that Jaysh al-Islam had control over everything, the fertile land, the livestock. A youth told me that before the terrorists left Douma on the buses, they shot all the animals.

The men spoke of executions, making a throat-slitting gesture. A younger man recounted another murder, when the executioner put a pistol in someone’s mouth and pulled the trigger.

“Terrorism, they are the literal meaning of terrorism,” Toufik Zahra, the stand owner, said.”https://www.rt.com/…/429349-syrians-tell-terrorists…/*

Also in Madaya:”…Two rooms, metal doors welded onto the entrances, had been used as cells. In the middle of another room, a metal bed frame with a piece of cloth tethered at one end. [https://www.youtube.com/watch?v=vXW2Dkk_1Bg]

“They interrogated and tortured people here,” a former FSA militant said. An unwilling participant, he said he was forced by other militants to join, and that he was among the first to take the government-offered amnesty when peace was restored to Madaya in May 2017.In neighboring Buqayn, Ahrar al-Sham transformed the municipality building into a prison, fortified with sandbagging and bricks. The dank cells were sealed with the same solid metal doors.

A soft-spoken employee of the municipality, limping as he walked, came over to tell me how he was shot at close range. Leaning on a crutch with prayer beads wrapped around the handle, he explained his injury. Recounting that terrorists had shot at the truck he and three others were in, he said, “the driver was killed and we were all injured. … We were subject to shooting many times.”[https://www.youtube.com/watch?v=ikgV0O9i36g]The reason for the attacks? To intimidate them from returning to work at the municipality. Three surgeries later, still needing another, the man said his wounded leg is now seven centimeters shorter than his good leg….”https://www.mintpressnews.com/syria-civilians…/232380/*

Also in eastern Aleppo:”… in the Eye Hospital complex, I passed a building marked as the headquarters of the Tawhid Brigade, and a building marked on an outside wall with the writing, “The Sharia court in Aleppo and its countryside,” before entering and descending to another underground prison.

It contained the same tight solitary confinement cells as in Lairamoun, as well as many dank, windowless, concrete rooms serving as mass cells for the unfortunate Aleppo residents imprisoned by the terrorists.

Many of the cement room-cells contained religious texts, in boxes and plastic crates, and on the main level two rooms had been used as classrooms, segregated by sex, for teaching the extremists’ beliefs to Aleppo’s mostly-Sunni Muslims.

Prisoners’ writings, with dates, on the walls showed that at least some of them were held in this dungeon for over a year. The fate of some prisoners was execution, depending on the perverted rulings of terrorist judges.

Western media played down the militarization of hospitals in Aleppo by al-Qaeda affiliates.

Independent British journalist Vanessa Beeley visited the hospital complex-turned-prison in April 2017 and interviewed a man who had been imprisoned for seven weeks by Jabhat al-Shamiya (the Levant Front coalition of al-Qaeda and Salafi terrorists) because he talked about how bad conditions were in East Aleppo, under the terrorists.

Beeley told me some of what the man, Ahmad Aldayh, a shopkeeper, had told her: “I was eyewitness to one execution: A young man, the only child in his family, was arrested because the terrorists found on his mobile phone a photo of his friend holding the Syrian flag. They tortured him for more than four hours and then executed him. We were all treated very badly. One woman begged three times for food and said she was starving. The warden ordered the prison guards to torture her for three hours as punishment for complaining. Just before the SAA fully liberated the area and the Eye Hospital on the 4th December 2016, 22 other prisoners were executed. They were all shot. They were also about to throw another prisoner off the roof of the building but the SAA advance was so fast they fled without killing him.”…”https://www.mintpressnews.com/syria-war-diary…/231201/