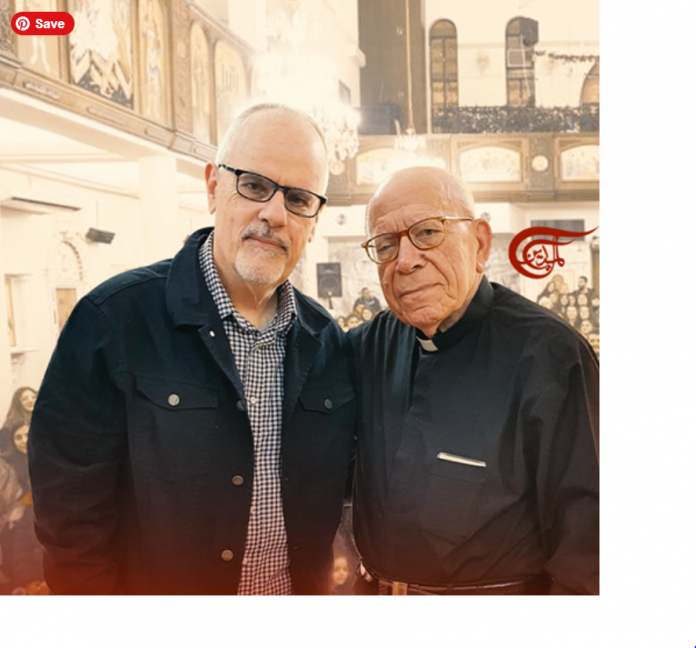 Not once has the Pontiff pointed a finger at “Israel” or the USA for their roles in two decades of slaughter and ethnic cleansing, including the expulsion of Christians.

Syrian priest Father Elias Zahlawi has reportedly shaken Pope Francis over the Vatican’s vague statements on the US-driven Middle East wars. Not once has the Pontiff pointed a finger at “Israel” or the USA for their roles in two decades of slaughter and ethnic cleansing, including the expulsion of Christians.

While both men are in their 80s, Father Zahlawi has ministered in Damascus since the 1960s and, since 1975, at the Church of Our Lady of Damascus. Syrian-born, he studied in Jerusalem and founded the now famous Damascus ‘Choir of Joy’ in 1977. That huge choir has toured Europe.

Pope Francis attained the highest rank in the Catholic Church after being an Archbishop in Argentina, but he is said to be ‘haunted’ by accusations of his involvement in Argentina’s dirty war, carried out by a US-backed military dictatorship. No charge was ever laid against him but some years ago the Argentine judiciary found that the Catholic Church was “complicit in abuses”.

According to some Syrian Christians, Father Zahlawi’s accusations over the Pope’s meaningless words – in face of the US and Israeli-led atrocities in Palestine, Syria, Iraq, and Yemen – touched a raw nerve.

The gentle, humble priest in Damascus, now 89 years old, wrote a series of letters to US and Syrian leaders, to the European Parliament, and to the last two Popes. But his first two letters to Pope Francis, in 2018 and 2019, were probably the most incisive.

“Why don’t you decisively and unequivocally adopt this very clear position of Saint Peter, against a western world that has spared nothing in its pursuit of total and absolute world dominance … including the systematic and continuous killing and destruction of total peoples and countries, including my homeland Syria?

“All of that is happening … either with complete media silence or worse yet, with the roaring noise of fabricated “facts”, designed to give credence to the worst obscenities, under the banner of “human rights, democracy, and freedom”.

“I have continued to read ‘with sorrow and dismay’ … the Roman Observer, hoping that one day I will find in it even one word of activism, [but] to be honest I only find in it … empty words, of the usual clerical content that we have gotten used to since the Emperor Constantine, with very rare exceptions. Yet outside the Church, in the west, there are many courageous and honorable voices.”

On 12 February 2019, he wrote again, after the Pope’s address to ROACO, the Board of the Society for Support of the Eastern Churches, where Francis was reported to have denounced the “great sin of war”, the thirst for “domination” of great “World Powers” and a refugee crisis which carries with it the risk of “eliminating Christians” from the Middle East.

This was a more carefully thought out letter, in which Father Zahlawi raised eight points. He began by asking, gently: “I wonder if the many grave issues you raised … did not deserve a clearer stand of more commitment and responsibility?”

His first point was to do with the Pope’s refusal to address the ethnic cleansing in Palestine:

“You say that “In the Middle East there is also a danger … of eradicating the Christians” … [but] do you believe that your audience and consequently your readers are ignorant, as your words suggest, of the countries which strive, with open insistence, and since the establishment of Israel, to totally eradicate the Christian existence in the whole Near East at the time they are about to accomplish this in occupied Palestine, which you call “the land of Jesus” and which has become the land of injustice, vengeance and death, and whose true name has been obliterated to become only ‘The Holy Land’?

In a second point he refers to the failure of the Pope’s generic words about the “pain” of the Middle East, and of land theft by ‘World Powers’, to address the US-led assault on his own country, Syria:

“these ‘World Powers’, at the head of which is the United States of America … forced about 140 member states countries … to declare war on my home country, Syria, and drove to it, from a hundred countries … jihadis, haunted by the evil of money, blood, avarice, and power.”

Third, Father Zahlawi chastises the Pope for suggesting that the “diminishing” numbers of Christians in the region might be due to pressure from Muslims. “If you want to suggest that the Muslims are the ones who force Christians to leave ‘the land they love’ … how can you explain their emigration at a worrisome rate since the establishment of “Israel” while they [Christians] throughout hundreds of years, lived … side by side with the Muslims?”

In his fourth point, he asks if the Pope while speaking of the Middle East as ‘the cradle of Christianity’ can possibly be ignorant that the “the Judaising of occupied Palestine …will very soon end every presence of Christians in ‘the land of Jesus’?”

Fifth, with regard to the Pope’s references to “great churches” in the Middle East, and ignoring the role of “Israel”, Father Zahlawi says “what you are practically doing … shackled by a horrific and sickly guilt complex towards the Jews” is to ignore and close your eyes to “the atrocities that are being committed openly and in flagrant violation of all laws, against all the Arabs, Muslims and Christians equally”, while even “some distinguished Jews” speak out against these crimes.

Sixth, he finds fault in the Pope’s overly general words about “the Middle East … [as] a land of death and emigration”, as the pontiff says nothing about the displacement of 12 million of the 23 million people in Syria, “without pointing an accusing finger at those who are responsible for these planned and inhuman emigrations in a country that was considered, before the so-called Arab Spring, as one of the safest countries on earth?”

In a seventh point, Father Zahlawi cites the Pope’s reference to “the grave sin … the sin of war”. But what does this mean, he asks, “without pointing, in the end, an accusing finger to countries such as the United States of America, Britain, and France, on the global scope, and at “Israel” on the scope of the Middle East, as they do not stop exploding totally unjust war … [in the name of] Freedom, Democracy and Human Rights?”

Finally, he refers to the Pope’s call that “the Middle East is a hope that we must take care of”, linking this to a revelation said to have taken place in Soufaniyeh Alley in Damascus in 2014, in the midst of the war on Syria. This revelation likens the wounds on Syria to those on Jesus. The clear, implicit message is: why has Pope Francis not denounced those who, like Judas, betrayed the people of Syria? The opinions mentioned in this article do not necessarily reflect the opinion of Al mayadeen, but rather express the opinion of its writer exclusively.

COVID and the Holocaust/ Grand Jury Proceedings with Vera Sharav