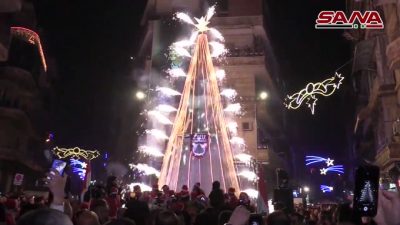 Mainstream media perpetrates huge deceptions and promulgates criminal war propaganda as policy. Often the omission is worse than the direct lie. Regularly, mainstream messaging omits context and ROOT CAUSES of events that it claims to be describing. The root cause of the Christmas celebrations in Syria is the FACT that Syria and its allies LIBERATED these areas from WESTERN-SUPPORTED terrorists. If this root cause is not stated clearly, then the messaging intentionally leaves itself open to misinterpretation. It becomes war propaganda that serves to vilify Syria and Syrians as it exonerates the war criminals from their heinous war crimes.

There are no Christmas celebrations in terrorist-occupied areas. They are forbidden. The terrorists BURN CROSSES and DESTROY everything Christian. They have been doing this throughout the course of the entire Regime Change war.

Thank the legitimate Syrian government lead by President Assad, the Syrian military, and Syria’s allies for these scenes of joy and celebration. Denounce the West, NATO, and their allies for the curse of terrorism that has plagued this benighted holy land for nine years. — Mark Taliano

***Flashy firework displays and bright lit Christmas trees popped up all across Syria to celebrate Christmas, a joyous day not only for the Christian minority, but to people of other faiths living in the country.

Christians were among the minority groups persecuted by various Islamist militant forces, which tore Syria into pieces since 2011. The central government has managed to regain control over most of the country, and life there is slowly returning to normality. That includes celebrating Christmas openly and without fear of sectarian violence.

Aleppo remains a major center of Christianity in Syria and naturally had some of the biggest Christmas events with thousands of people flooding the streets to take part in the festivities. Roughly half of the city was controlled by jihadist groups for years, and they were ousted in the last weeks of 2016.

The capital Damascus too had its share of jubilations, complete with a big light show in the Abbasiyeen Square.

There were fireworks, parades and carols in other part of the city. And a lot of grateful prayers for an end to the constant threat of shelling from the suburbs, which were previously held by the jihadists.

The original source of this article is RT NewsCopyright © Mark Taliano and RT News, RT News, 2019

Christian Genocide in Syria: An Interview with Yasmine from Damascus/ Posted...