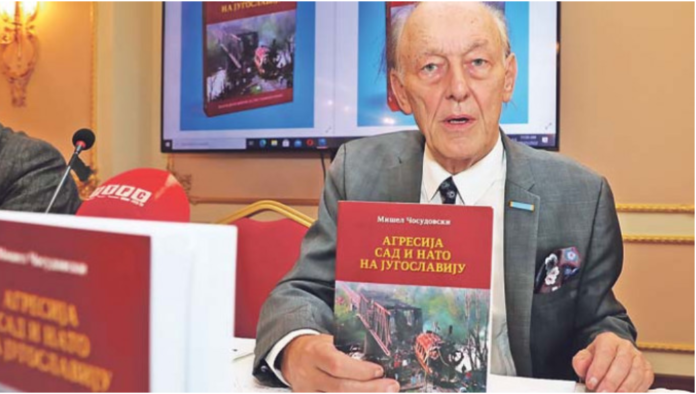 The US and NATO have a responsibility for returning the war to European soil half a century later, said Belgrade Forum for the World of Equals President Zivadidin Jovanovic 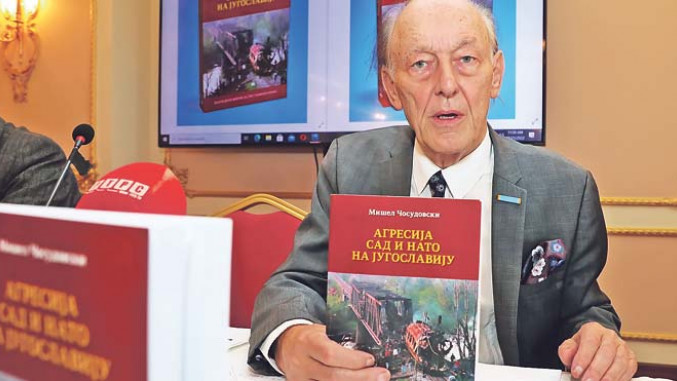 The war against Yugoslavia was a rehearsal for many of the wars that later took place, one of the conclusions from yesterday’s promotion of the book by one of the greatest independent thinkers of the modern saint Misal Čosudovsky, professor of the University of Otava and director of the Center for Globalization Research. His work “U.S. and NATO aggression on Yugoslavia” was printed by the Belgrade Forum for the World of Equals and presented yesterday in Belgrade, and Professor Čosudovski said that in many ways the war fought in Yugoslavia began much earlier, that is, in the 1980s and was a rehearsal for the armed conflicts that happened afterwards.

“Already in the early 1990s, I began to explore the economic dimensions of the situation here and I realized how crucial it is in strategic and military terms,” Professor Chosudovski said at the start of his presentation. He pointed out that NATO categorically claimed that the goal was to preserve lives, but added that a year after the war, he visited the children’s hospital, which he said was a strategic goal during the bombing, because electricity generators were hit in the case of the hospital.

Brnabic: The main task for Serbia to maintain stability and continue growth

Professor Čosudovski states that Yugoslavia was an emerging economy, and that after 1999 the shock therapy of the International Monetary Fund follows and that this institution had a strategy in 1999 that destroyed the fiscal policy of Yugoslavia. Čosudovski said that between 1990 and 1995, the U.S. strategy was to introduce Al Qaeda terrorists in this territory and that they were involved in the Bosniak-Muslim army. He reminded that the Dayton Peace Agreement was signed in 1995 at a military base in Ohio, under the control of the US government, military and – an army of lawyers.

Speaking about the transfer of the conflict from Bosnia and Herzegovina’s soil to Kosovo and Metohija, Professor Čosudovski explained that in order not to be directly connected to the war, the US hired a private mercenary company, or a corporation for military professional recruitment. “They recruited Agim Ceku, and later he became the maincommunication of the so-called “2000s”. Kosovo Liberation Army,” the author of the book noted, adding that the so-called KLA was financed thanks to organised crime.

The book “Aggression of the USA and NATO on Yugoslavia” was discussed by retired General and formerly Head of the Yugoslav Army General Staff Branko Krga, retired general and president of the IO Club of Generals and Admirals of Serbia Luka Kastratović and president of the Belgrade Forum for the World of Equals Zivadidin Jovanovic. Krga said he believes the public in Serbia has accepted with special approval the title of the book, which reads “aggression”. “The concept of aggression represents the very essence of what happened in 1999,” Krga said, reminding that there are different interpretations, such as that of “humanitarian intervention”. Krga pointed out that during the war he was at the head of the military service and emphasized that there was absolutely no plan for ethnic cleansing, and that Professor Čosudovski observed this in the chapters of his work.

Kurti: There will be no additional deadline for reregistering the vehicle

The reasons for the war waged against us are found by many authors in the reaffirmation of NATO, on the occasion of marking 50 years since the formation, and among other things in neutralizing Russia in this area, testing the model of some future intervention, Krga noted. Speaking about the aftermath of the war, he pointed out that one of the consequences is the suffering of the Serb, non-Serb and Albanian populations from humanitarian bombs with depleted uranium, which is also discussed in the book. Another consequence of the war, he noted, is that it conducted a rehearsal for the wars in Afghanistan, Syria, Armenia and other countries.

Kastratovic stated that many books have been written about NATO aggression. “It is very important to point out that this was an aggression by the US, and NATO is just an extended arm of the US,” Kastratovic said, adding that Professor Cososudovski reminded us of this fact. He pointed out that the importance of the book is also that it was written during the aggression against our country, and that the moment of the promotion of the work itself is significant because the US and the EU openly threaten Serbia and blackmail it.

The president of the Belgrade Forum for the World of Equals, Zivadidin Jovanovic, said that the book was published with great pleasure and honor in bilingual form, namely in Serbian and English. “From the book and from the presentations we have heard, there are some assessments that we must always keep in mind, especially that we are victims of one-sided pro-Western and pro-Nativ propaganda and we are not always able to discern what is objective and what is propaganda,” Jovanovic said. First and foremost, he stated that the US and NATO have a responsibility because they brought the war back to European soil, after World War II, and as another important fact, Jovanovic states that this war is expansionist, it is a war of expansion and a conquest war. “This is far from some intervention, whether it was called humanitarian or otherwise. This strategy of NATO’s expansion into the East is the basis on which NATO aggression was carried out,” Jovanovic said, adding that the chain of NATO bases that sprouted, he said, “like mushrooms after rain” in Bulgaria, Romania, all the way to the Baltic Republics and Poland, started from “Bondstil”.

Empire Destroys Women’s (and all rights) in Syria and Beyond