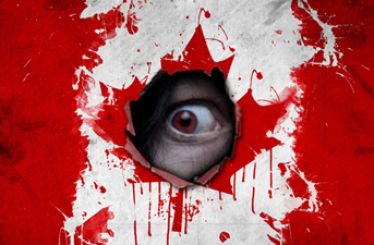 People, the new “wretched of the earth” are increasingly caged, shackled, disappeared, lost at sea. Racism and fascism, outgrowths of fabricated supremacist ideologies, are becoming the “new normal” as socially-oriented, democratic political economies at home and abroad are undermined and destroyed. “Neoliberalism” and democracy run in opposite directions.

The same  dystopia that the transnational oligarchy and its Imperial terror forces impose on prey nations is also being imposed on domestic “First World” populations as well-paying jobs are off-shored, healthcare is “privatized”, middle classes evaporate,  the public sphere is plundered, regulations that are detrimental to corporate conglomerates are erased, and the masses are disempowered.  Vast flows of public monies are transferred to War Inc. which further devastates people and the planet.  Root causes of the dystopia are taboo topics. (Mark Taliano, July 19, 2019)

Freedom of thought and expression are erased beneath the amorphous predation of this neo-con “global order”. The truth must not emerge, because the truth is entirely toxic to humanity and the habitable planet. Canada’s support for Nazism and al Qaeda are hallmarks of the cancer infecting us. But the cancer must be hidden. This is the new “Nazism”, (cloaked in humanitarianism), but it is arguably far more devastating than the old ”Nazism”.

Hallmarks of the system include decimation and plunder of the public sphere, “privatization” and deregulation, factors which led directly to the 2008/09 crash, the public bailouts of corporate monopolies — including banks[1]and car manufacturing — skyrocketing public debt, and the on-going  economic dystopia of precarious employment, off-shoring of well-paying jobs, rising poverty, and increasing wealth concentrated in the and hands of an oligarchic (extreme) minority.

Predation of the public sphere includes the public bailouts of auto manufacturers and banks. But the corporate monopolies know no loyalties, and they are protected by supranational “free” trade agreements.  Hence, whereas the Canadian auto industry received almost $4 billion in bailouts[2] in 2009, they are now relocating to cheaper pastures[3]. Civic responsibility and neoliberalism are completely divorced from each other.

Overseas, neoliberalism imposes itself through war and terrorism. Canada and its allies support neo-Nazis[4], al Qaeda and ISIS[5], but the war propaganda and the apparatus of Lies Inc., to which the colonial media, spawn of concentrated media ownership, owes its fidelity, hides the truth to all but the well-informed. War propaganda is the norm, not the exception.

This failed economic model perpetuates itself domestically and globally with vast and increasing inflows of public monies.  Hence, the over $32 billion that Canada spends on “Defence” spending to the detriment of spending that addresses real world needs.

The “global order” preached by Canada and its allies, is the new Fascism, globalized, parasitical, mass murdering, and mindless.

Canada can remain a vassal to the worst of the worst, relinquishing all of its sovereignty, or it can take steps towards a better future.  Leaving NATO would be the first best step.

Weather Warfare: Beware the US Military’s Experiments with Climatic Warfare/ By...

Canada’s Foreign Policy, Ukraine, Syria and the TPP: The Need for...