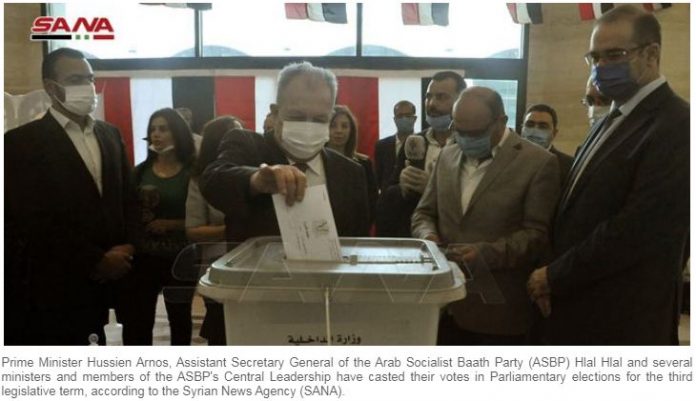 Prime Minister Hussien Arnos, Assistant Secretary General of the Arab Socialist Baath Party (ASBP) Hlal Hlal and several ministers and members of the ASBP’s Central Leadership have casted their votes in Parliamentary elections for the third legislative term, according to the Syrian News Agency (SANA).

The agency quoted the premier after he voted today at the headquarters of the cabinet as saying: “The elections of the People’s Assembly [parliament] constitute a message to the whole world that Syria moves firmly towards obtaining a complete victory over terrorism. These elections also represent a real response to all those who have conspired against the country.”

The premier affirmed that Syrian residents in north Syria adhere to national principles despite all pressures being put on them by the ‘Syrian Democratic Forces’ militia and the US and Turkish occupation forces.

On his part, Minister of Foreign Affairs and Expatriates Walid al-Moallem said that holding the parliamentary elections is a victory and reflects Syria’s rejection of foreign intervention in its internal affairs.

“The elections show that Syrian people, who are determined to liberate all areas from terrorism,  are also determined to complete all constitutional processes,” the minister added, pointing out the elections are one of the required steps to rebuild what has been destroyed by terrorism.

Information minister Imad Sara said that holding parliamentary elections proves the independence of the Syrian national decision and the unity between people and the Syrian army in fighting terrorism.

The ministers of Health, Education,  Oil, Justice, Local Administration and Electricity asserted that the elections prove that Syrian people are the decision-makers in shaping their future.

Terrorist groups in Daraa reject language of settlement for the fourth...