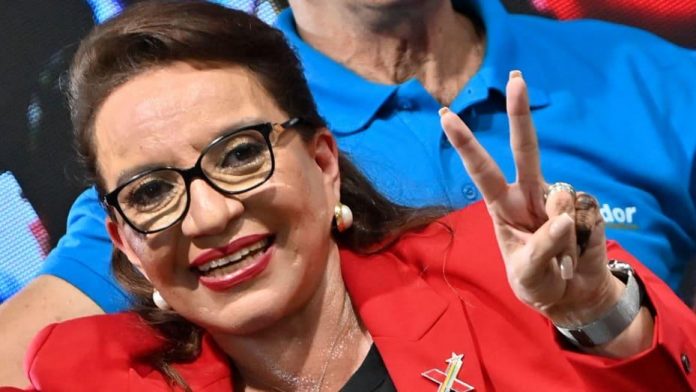 Elect leftist Xiamora Castro as first female president in a blow to Washington and the party of Narco-Dictator, Juan Orlando Hernández, who could now be put on trial

Honduras’-twelve-year nightmare prompted by a U.S.-backed coup came to end this week with the election of Xiamora Castro as the country’s new president, with 68 percent voter turnout.

Thousands of Hondurans poured into the streets the day after the vote, shooting fireworks and singing “J.O.H., J.O.H., and away you go,” a reference to the deeply unpopular outgoing President Juan Orlando Hernández.

At the victory celebration. Castro proclaimed: “for 12 years the people resisted, and those 12 years were not in vain. God takes time but doesn’t forget. Today the people have made justice.”

Castro is the wife of José Manuel Zelaya, Honduras’s president from 2006 to 2009, who was overthrown in the 2009 coup, and served as Castro’s campaign manager.

Zelaya had earned the wrath of Honduras’ reigning oligarchy and U.S. by raising the minimum wage, increasing teacher pay, opening the door to restoring the land rights of small farmers, and joining the Hugo Chavez-led Bolivarian Alliance for the Americas (ALBA), which aimed to integrate Latin American economies independent of the U.S.

Miguel Angel, a political activist in his 20s who fled Honduras after the coup, stated that “Zelaya was the best president Honduras had ever had”; one who “followed through on his campaign promises.” The latter proved to be his undoing as the wealthy “didn’t like the fact that a man of power gave a plate of food to the poor.”

With Castro now in charge, the prospect for Honduras is suddenly much better—the poor may indeed get a plate.

Castro campaigned on a platform of cleaning up corruption, adopting a new constitution, loosening restrictions on abortion and adopting more social democratic policies compared to the neoliberal austerity measures that have devastated Honduras since the coup.

Castro has also floated the idea of dropping diplomatic support for Taiwan in favor of China, a policy proposal keenly watched in Washington.

Al Jazeera correspondent Manuel Rapalo reported from Tegucigalpa that Castro had won the election because “many people feel hungry for change after 12 years of single-party rule. Many people see the ruling National Party as being endemically corrupt, leading to worsening poverty in the country.”

Honduran scholar Suyapa Portillo of Pitzer College said that many voted in the election for the “dead”— those killed in the 2009 coup and subsequent state repression that was financed considerably by the U.S. through security assistance programs and under the War on Drugs.

A Government of Criminals

Honduras’ departing president, Juan Orlando Hernández has been accused by a prosecutor in the Federal District Court of Manhattan of protecting Honduras’s drug traffickers and helping them to flood the U.S. with cocaine.

Hernández was nevertheless considered by the Washington establishment as a trusted partner on sensitive issues, including counterterrorism and anti-narcotics efforts, and had won plaudits for vowing to help curb immigration from Honduras.

Hernández’ brother Tony, a congressman from 2014 to 2018 and associate of Mexican drug kingpin Joaquin “El Chapo” Guzman, was found guilty in 2019 of importing nearly 200,000 kilograms of cocaine into the United States and sentenced to life in prison. (a man at the sentencing observed: “Look how these people, who had so much power in Honduras, end up here like rats.”)

Many of the shipments—which had Tony’s initials emblazoned on his own brand—were overseen by the former Honduran chief of National Police, Juan Carlos Bonilla Valadares (aka “El Tigre”), whom Tony Hernández said was “very violent,” and “trusted with special assignments, including murders.”[1]

Hernández designated successor, Nasry “Tito” Asfura of the ruling National Party (PN), the mayor of Tegucigalpa, conceded defeat late on Tuesday with 34.1% of the vote, compared to Castro’s 53.4%–with 52% of the vote recorded.

Asfura’s candidacy was tainted by his link to influence peddling in Costa Rica in the Panama Papers, and by his being named in a government investigation into embezzlement of more than one million dollars in city funds.

The charges stemmed from an investigation into a complex series of transactions that ended with tax funds shunted to personal accounts, according to court documents.

Venezuelan leader Hugo Chávez characterized the 2009 coup against Zelaya as part of a “retrograde and anti-historic counter-offensive by the U.S. empire,” whose aim was to “roll back the union, sovereignty and democracy of our continent.”

The Center for Economic and Policy Research in 2017 concluded that Gross Domestic Product (GDP) dropped by two percent and unemployment rose from 3 to 7.4 percent in the years after the coup in Honduras, while the women’s underemployment rate more than doubled.

Hondurans complained that the price of beans had risen to much in this period that only the rich could afford to eat them.

The social and environmental cost of the government’s policies was borne most by indigenous groups like the Moskitia, Miskitu and Garifuna, whose waterways and land were threatened by a 2013 agreement granting the BG Oil Group, subsequently bought over by Shell, oil and gas exploration rights off the Honduran coast.

Castro’s election victory could prove chimeric if the Nationalist Party retains control of the Congress and locks her major legislative initiatives.

The State Department issued a statement on Tuesday expressing optimism about the high voter turnout and asserting its willingness to work with Castro—though could easily turn against her if her policies turn left.

The majority of Hondurans, nevertheless, are feeling better about their future prospects today than they had been before the election.

CovertAction Magazine is made possible by subscriptions, orders and donations from readers like you.

When you donate to CovertAction Magazine, you are supporting investigative journalism. Your contributions go directly to supporting the development, production, editing, and dissemination of the Magazine.

CovertAction Magazine does not receive corporate or government sponsorship. Yet, we hold a steadfast commitment to providing compensation for writers, editorial and technical support. Your support helps facilitate this compensation as well as increase the caliber of this work.

Please make a donation by clicking on the donate logo above and enter the amount and your credit or debit card information.

We sincerely thank you for your support.

Disclaimer: The contents of this article are the sole responsibility of the author(s). Covert Action Publications, Inc. (CAP), including its Board of Directors (BD), Editorial Board (EB), Advisory Board (AB), staff, volunteers and its projects (including CovertAction Magazine) are not responsible for any inaccurate or incorrect statement in this article. This article also does not necessarily represent the views the BD, the EB, the AB, staff, volunteers, or any members of its projects.

Differing viewpoints: CAM publishes articles with differing viewpoints in an effort to nurture vibrant debate and thoughtful critical analysis. Feel free to comment on the articles in the comment section and/or send your letters to the Editors, which we will publish in the Letters column.

Copyrighted Material: This web site may contain copyrighted material the use of which has not always been specifically authorized by the copyright owner. As a not-for-profit charitable organization incorporated in the State of New York, we are making such material available in an effort to advance the understanding of humanity’s problems and hopefully to help find solutions for those problems. We believe this constitutes a ‘fair use’ of any such copyrighted material as provided for in section 107 of the US Copyright Law. You can read more about ‘fair use’ and US Copyright Law at the Legal Information Institute of Cornell Law School.

By using this site, you agree to these terms above.

He is the author of four books on U.S. foreign policy, including Obama’s Unending Wars (Clarity Press, 2019) and The Russians Are Coming, Again, with John Marciano (Monthly Review Press, 2018).

He can be reached at: jkuzmarov2@gmail.com.