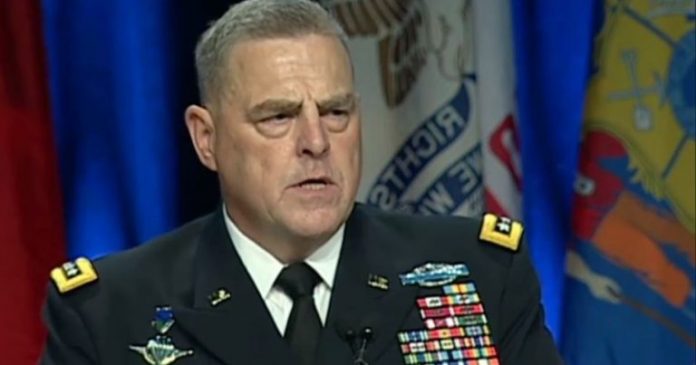 Joint Chiefs of Staff Chairman Mark Milley claimed last week that China was close to a “sputnik moment” due to its successful test of a hypersonic missile.

However, U.S. space-based early warning systems can detect hypersonic missiles, marking them as no threat at all.

General Mark Milley, Chairman of the Joint Chiefs of Staff warned on Wednesday, October 27th, that China’s development of a hypersonic missile system is “very concerning,” calling it “very close” to a “sputnik moment”that triggered the space race during the Cold War.

“What we saw was a very significant event of a test of a hypersonic weapon system. And it is very concerning,” Milley said during an interview with “The David Rubenstein Show: Peer-to-Peer Conversations” on Bloomberg Television. “I don’t know if it’s quite a Sputnik moment, but I think it’s very close to that. It has all of our attention.”

Sputnik was the first artificial satellite launched into low Earth orbit in 1957 by the Soviet Union, which sparked the space race between the U.S. and USSR.

Theodore Postol, professor emeritus of Science, Technology, and International Security at the Massachusetts Institute of Technology (MIT) and a former top policy adviser to the Chief of Naval Operations, says that the Sputnik analogy advanced by General Milley is off base.

“The launching of Sputnik,” Postol said in an interview with CAM, “signaled at the time that the Soviet Union was able to compete with the U.S. in space and had been a surprise.” However, in the case of China and the testing of a hypersonic missile, U.S. intelligence agencies were “already aware about it and knew that China is very advanced in science and technology.”

The hypersonic missile, furthermore, “does not threaten the U.S. population in any way or provide China any military-technological edge.”

This is because the U.S. has “extraordinary space-based early warning infrared systems with the ability to detect hypersonic vehicles as they descend into the atmosphere and become heated to very high temperatures.”

General Milley’s statement, according to Postol, reflects how “idiots in the Pentagon” and political appointees are trying to “push us [the U.S.] into military confrontation with China over nothing.”[1]

“Pushing us into military confrontation over nothing”

Launched via rocket, the hypersonic missile can travel over 6,000 miles at five times the speed of sound (3,836 mph). It releases a hypersonic vehicle that runs parallel to the earth’s surface and can skip off it like a rock before reaching its destination after heating up to a very high temperature.

The space-based early warning system can see the hot spots of the hypersonic missile that’s moving when it dips into the atmosphere. The exhaust from the hypersonic vehicles rocket would also be recognizable.

According to Postol, a more real threat to U.S. national security are ballistic missiles—that Russia and China both possess—which are more accurate and versatile and launch balloons in space that radar cannot peer through and detect.

The U.S. military also cannot defend against cruise missiles that the Russians and Chinese have in their arsenals.

Testing the hypersonic missile, according to Postol, may provide “a statement from China that they are a technological competitor to the U.S.,” but it will “have little or no meaning in terms of adding significant nuclear-strike capabilities.”

Postol says that he “does not think that Milley is a liar, but believes that he was provided false information from someone within the U.S. military or intelligence agencies and didn’t know any better.”

According to Postol, “Milley is both an unsophisticated consumer of intelligence and someone who is easily manipulated.”

In October, “when a drone strike in Kabul killed ten civilians, Milley stated that the attack was just”—though later acknowledged it had been a mistake.

“A dysfunctional system” and culture that “hypes threats”

Trained as a nuclear engineer at MIT, Postol said that his experience as a scientific policy adviser to the Chief of Naval Operations, Admiral Jim Watkins, from 1982 to 1984, “left him with a low regard for the accuracy of information provided by high-level government employees.”

This low regard has only intensified with time.

When Colin Powell gave his infamous speech at the UN in February 2003 about Weapons of Mass Destruction (WMD) in Iraq, Postol—then a Pentagon adviser—knew right away that every line in the speech was wrong and that Powell himself knew this.

Recipient of the Leo Szilard Prize in 1990 from the American Physical Society for “incisive technical analysis of national security issues that [have] been vital for informing the public policy debate” and Norbert Weiner Award from Computer Professionals for Social Responsibility for “uncovering numerous and important false claims about missile defenses,” Postol earned the ire of the Bush I administration when he challenged the efficacy of the Patriot missile system—which had intercepted Scud missiles launched against Israel by Iraqi ruler Saddam Hussein during the first Persian Gulf War.

Ted Postol holds a model of a Scud missile launcher at MIT. After the Gulf War, the Patriot missile system won praise for shooting down Iraqi Scuds—until Postol spoke up. [Source: archive.boston.com]

Since that time, Postol has been highly critical of the tearing up of arms control agreements like the Intermediate-Range Nuclear Forces (INF) Treaty with Russia reducing cruise missiles, and U.S. government investment in ineffective weapons systems that waste taxpayer dollars.

In Postol’s view, the intelligence agencies have some good people working for them, but have developed into “rigid, dysfunctional bureaucracies with weak leaders who are often politicized.”

Those who gain promotion “have their own motivations” and “do not always provide the best information.” They are “part of a culture that hypes threats,” and “provides higher ups with a storyline that is useful to the larger agenda which is to get more money from Congress.”

By amplifying threats, the intelligence agencies want to “scare people” so they will “sanction huge military budgets” and big-ticket “defense projects that often add little to national security.”

According to Postol, the intelligence agencies deliberately deceived the American public when they claimed that Syrian President Bashar al-Assad carried out chemical weapon attacks against his own people—a claim that was adopted as a pretext for military strikes against Syria.

Postol reviewed key evidence about alleged attacks in August 2013 in the Ghouta district of Damascus and in April 2017 in the town of Khan Shaykhun in the Idlib Governate of Syria.

In the case of Ghouta, Postol said that the Obama White House presented a false intelligence report like in the Gulf of Tonkin incident that could have caused the nation to go to war.

According to Postol, the reason the White House was lying was simple: The rockets that delivered the Sarin gas could only travel two kilometers. The White House map in turn showed that they would have had to have been delivered from inside rebel-controlled areas.

In the case of the attack on Khan Shaykhun, Postol said that the Syrian air force bombed a building—a meeting place for extremist leaders—with a supply store in its basement that stored pesticides and other chemicals which released toxic materials when it was struck.

The crater in the building had to have been caused by artillery rockets, and the scene was later staged to make it look like it was the target of a sarin nerve gas attack by Assad.

1. Jeffrey St. Clair wrote in Counterpunch that “China’s successful hypersonic missile test insures that over the next decade trillions will be diverted from health care, climate change, education and infrastructure budgets into a bottomless Pentagon slush fund for developing, testing and deploying missiles that by definition (or at least according to the logic of MAD theory) can never be used.”