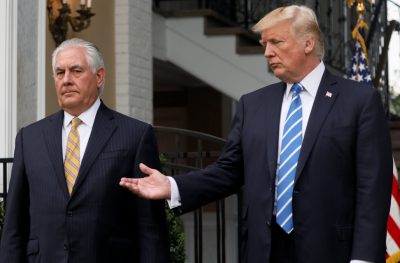 U.S. Secretary of State Rex Tillerson recently announced that the U.S. occupation of Syria would continue until three conditions are met:

His words are an obscenity. They are also a smokescreen to disguise actual realities and imperial intentions. Not only is the U.S. occupation criminal according to Nuremburg Principles, but the diktats themselves are either unattainable or redundant, and therefore doomed to fail – which is the intent.

The first demand, that ISIS must be destroyed is intentionally unattainable since ISIS are U.S. assets, and so they will be there as long as the U.S. is there. The U.S. has no intention of eliminating its foremost pretext for waging war against humanity.

Leading Australian academic expert on the Middle East, Jeremy Salt, explains in these words what we should already know:

“The war on Syria goes on. It is not over as many have said: but for outside intervention it never would have started. Even though the ISIS has been virtually destroyed in Syria, thus fulfilling the rationale for its forces being there, the US is refusing to leave. It has been playing a double game, declaring war on the ISIS while clandestinely cooperating with it in various ways. It wanted a Salafist principality in eastern Syria and the Islamic State gave it one. ISIS fighters criss-crossed the Syrian desert, towards Mosul and Palmyra, without the US intervening, although satellite reconnaissance would clearly have shown these lines of pickup trucks kicking up the summer dust. US Special Forces passed through Islamic State positions on the way to Deir al Zor, the US shipped takfir fighters out of Raqqa with their families and the US has been training takfiris rebranded as ‘rebel’ fighters at its Al Tanf base.”[1]

And Salt’s accurate assessment above only scratches the surface of the West’s duplicity and criminality. Tillerson’s repugnant statements also included this gem, as reported by Daniel McAdams in “Breaking – Tillerson Unveils ‘New’ US Syria Plan: ‘Assad Must Go!’ ”:

“US troops will remain in Syria to prevent the Syrian government from re-establishing control over the parts of Syria abandoned by a defeated ISIS. So the legitimate government of Syria will be prevented by an illegal United States military occupation from reclaiming its own territory? This is supposed to be a coherent policy?”[2]

McAdams is describing longstanding US policy of using terrorist assets such as ISIS as place- setters. ISIS will occupy, destroy, terrorize, and depopulate an area so that “liberators” can take their place as new occupiers.[3]

Tillerson’s Regime Change utterance, the familiar “Assad must go!” refrain, also represents criminal duplicity, since it is the Syrian government and its allies who are defeating Western terror proxies in Syria. If Assad goes, the terrorists will stay.

As McAdams points out, Libya (which pre-invasion had the highest HDI in Africa) now hosts slave auctions[4] (as well as being a terrorist hub), about half a million have perished in Iraq (from 2003-2011)[5] thanks to that invasion (and this figure does not include over 500,000 children and about one million others murdered by pre-war sanctions). And of course the neo-Nazi infested Kiev junta’s downward-spiraling political economy – another imperial project – is also a disaster.[6]US Planning to Disintegrate Syria, Not Fighting ISIS: Russian FM Lavrov

Finally, the diktat that refugees must be returned to Syria is also beyond ridiculous, since they are already flooding back into liberated areas of Syria, and they will never flood back to a U.S.-occupied, sectarian, terrorist- infested Syrian. But again, that is the duplicitous intent.

The U.S. and its Coalition vassals – including Canada – seek to destroy Syria.  If Tillerson’s demands are met, this is what will happen. And the overseas holocaust will deepen. Those who control the crumbling U.S. Empire must surely be Satanic.