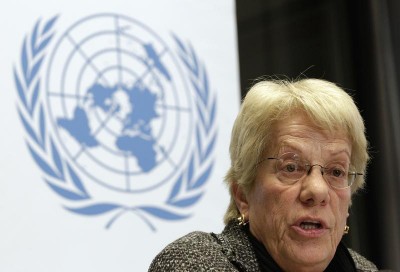 All of the Western-prosecuted 9/11 wars of aggression have been waged on the basis of lies, the accumulated impact of these wars is an overseas holocaust[1], and yet the NATO war criminals continue their aggressions secure in the knowledge that they are immune to prosecution. And they are immune.

In fact they have been immune for some time now. When NATO was bombing civilians in Yugoslavia in 1999, Carla Del Ponte, the chief prosecutor for the war crimes tribunal for the former Yugoslavia in The Hague, told the United Nations Security Council that her investigation had found no basis for charging NATO with war crimes.

NATO destroyed Yugoslavia, President Slobodan Milosevic[2] of Yugoslavia went to prison and died in prison, only to be recently found innocent of the charges against him. Victor’s Justice.

The same Carla Del Ponte, a member of the U.N. Commission of Inquiry on Syria, now has the audacity to publicly proclaim that,

“(t)he U.N. Commission of Inquiry on Syria has gathered enough evidence for President Bashar al-Assad to be convicted of war crimes.”[3]

The timing is significant. NATO terrorists are losing the war, and refugees are flooding back into liberated, government-secured areas of the country.[4]

Former French ambassador Michel Raimbaud, correctly accuses the (resigning) Carla Del Ponte of being judge and jury in a commission that is supposed to be impartial. To paraphrase, he explains that she has always been venomous against President Assad, who is defending his country from attack, and protecting its sovereignty, its territorial integrity, and its independence. He says that she is blind and deaf to voices coming from Syria and that she sees no urgency in bringing to trial those who orchestrated, financed, supported, and armed those who destroyed Syria and other countries.[5]What Do We Know About the Dirty War on Syria?

None of the public accusations against Syria and President Assad would prevail in an impartial criminal court of law, (especially since the sources of the evidence are from the terrorists themselves)[6], yet the crimes of the aggressors have been front and center since before the dirty war began.

The US-led coalition and allied forces perpetrating war crimes against Syria – including Canada’s refugee welcoming, terrorist-supporting government — should be brought before war crimes tribunals in The Hague.

Oligarchs Own the U.N.