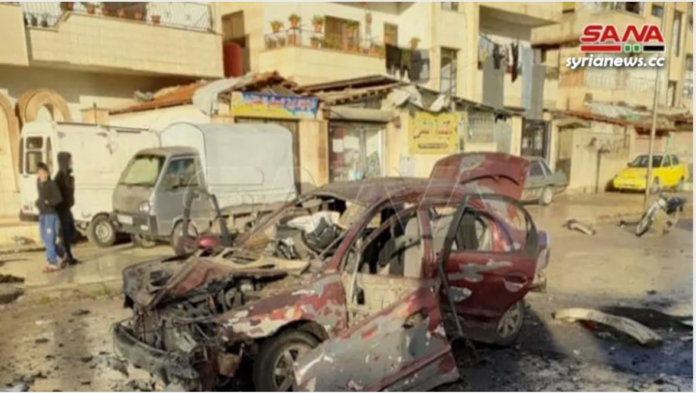 Remnants of ISIS and Al Qaeda-affiliated terrorists assassinated the mayor of Al Nuaymah (Elnaymah) town in the eastern countryside of Daraa earlier in the morning today, Thursday, other members of his family were injured in the attack.

Local sources and the reporter of the Syrian news agency Sana confirmed the killing of Alaa Abboud (38 years old) by a bomb planted in his vehicle near the Al-Khirbeh roundabout in the city of Daraa, the center of the province of Daraa.

Family members of the slain mayor were rushed to the National Hospital in Daraa for treatment from injuries they sustained in the heinous attack.

Biden forces illegally deployed in the Al Tanf area in the depth of the Syrian desert at the joint borders with Iraq and Jordan, in addition to holding hundreds of Syrian families in the infamous Rukban concentration camp, continue to sponsor the remnants of ISIS terrorists, especially the so-called Maghawir Thawra, and other Al Qaeda terrorists, the locals who refused to join the reconciliation and foreigners brought into Syria by the CIA through Jordan and Turkey.

The same Biden forces impose a 50 kilometers no-fly zone around their illegal base in which these ISIS terrorists take refuge and launch their terrorist operations against the Syrian people, state officials, and Syrian army soldiers in the southern and central region of the country.

The terrorist group and the US army bragged about carrying out a joint military drill in early December last year!

Today’s assassination of Alaa Al Abboud is the 21st assassination targeting mayors and members of the local city and town councils in the Syrian southern province of Daraa since 2018 when the Russian Reconciliation Center oversaw a reconciliation process that allowed the liberation of most of the province from terrorists without shedding blood in major military operations, however, the rest of the province was liberated by military pressure in September this year.

“Going After” the Islamic State. Guess Who is Behind the Caliphate...