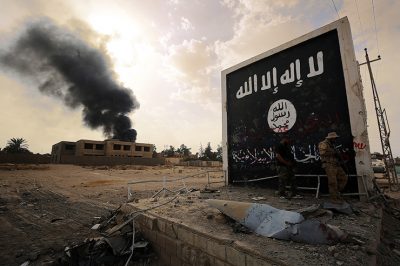 They are the product of the West’s moral degradation, its disdain for international law, and its anti-Life core. A rotten apple by any measure.

Imperial strategies driving these proxies are also similar. Whereas the West created and supports ISIS/al Qaeda[1], it presents them as “enemies”.

The terrorists serve as fake humanitarian pretexts for invasions even as they serve as proxies to destroy target countries even before the invasions and the economic warfare are firmly established. Imperialists always need scapegoats, and the Western-supported terrorists also serve this function. Governing agencies fabricate Islamophobia by presenting the “Muslim” terrorists as enemies even when these terrorist behaviours are far removed from Islamic teachings.

” ‘No clear-cut profile’ of a foreign fighter”

The so-called “Caliphate Project”[2]is a CIA project. NATO and its allies support the terrorists in Syria who are carving out territory in resource rich, strategic areas of Syria.  All of this has been proven beyond a reasonable doubt for years despite the widespread ignorance of Western populations who are trained to accept CNN and Defense Department messaging as the truth.

NATO and its allies use the Western-empowered and supported neo-Nazis[3]in Kiev, rotten fruits of the 2014 Western coup against the legitimate Ukrainian government, in a similar fashion. In this case, Russia is the scapegoat, even though the coup preceded Russian involvement that opposes the Western crime scene near its borders.

The neo-Nazi counterpart to the so-called “Caliphate Project” would be the “Reconquista” project. Max Blumenthal explains:

“Foreign Azov volunteers are driven by the call of the ‘Reconquista,’ or the mission to place eastern European nations under the control of a white supremacist dictatorship modeled after the Nazi Reichskommissariat dictatorship that ruled Ukraine during World War II. The mission is promoted effusively by Azov’s chief ideologue, Andriy Biletsky, a veteran fascist organizer who leads the Social National Assembly in Ukraine’s parliament. Biletsky’s assembly has pledged to outlaw interracial contacts and vowed “to prepare Ukraine for further expansion and to struggle for the liberation of the entire White Race from the domination of the internationalist speculative capital.”[4]

Empire’s end-game is world conquest, a New World Order of fascist totalitarianism. Those controlling the levers of power must deceive domestic populations because the impoverishing “project” is toxic to Life itself. No reasonable, critically-thinking population would ever accept it.

A first step to countering this world-encompassing disease would be a NATO Exit[5]campaign. NATO is the deceptive umbrella under which these diabolical machinations are thriving.

[4] Max Blumenthal, “The US is Arming and Assisting Neo-Nazis in Ukraine, While Congress Debates Prohibition.” 18 January, 2018, The Real News Network, (https://therealnews.com/columns/the-us-is-arming-and-assisting-neo-nazis-in-ukraine-while-congress-debates-prohibition) Accessed 7 April, 2018.