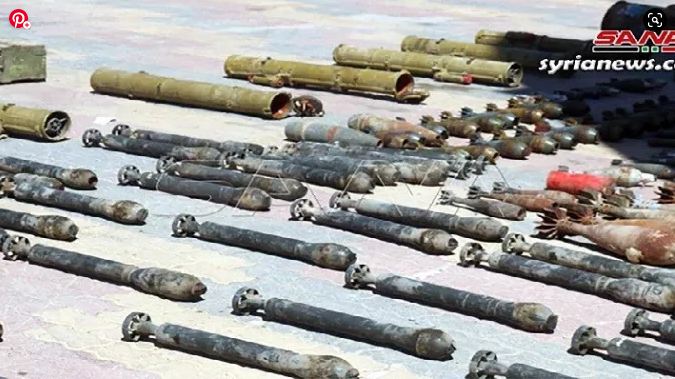 Syrian Arab Army troops and allied forces discovered a house previously used by the US-sponsored ISIS terrorists, the house was turned into a weapon and munition depot in the city of Al Mayadeen, in the eastern Deir Ezzor countryside.

More than two and a half years after cleaning Al Mayadeen city, the Syrian engineering units are still combing and still unearthing quantities of weapons and munition in the once ISIS-fortified stronghold. Al Mayadeen was cleaned from ISIS by the Syrian Arab Army and its allies in October 2017 to the dismay of the USA and despite all the malign efforts carried out by the US-led coalition to hinder the SAA progress against ISIS in the region.

Most of the discoveries are done with the help of the local residents returning to their homes and farmlands, this was the case as well.

The quantities and qualities of weapons, munition, and communication devices, in addition to food, medicine, and all sorts of logistical supplies found by the SAA in each Syrian province cleaned from the terrorists is enough to supply a national army of a country the size of Greece, less the airplanes which the terrorists are using drones supplied by the regime of the Turkish madman Erdogan instead.