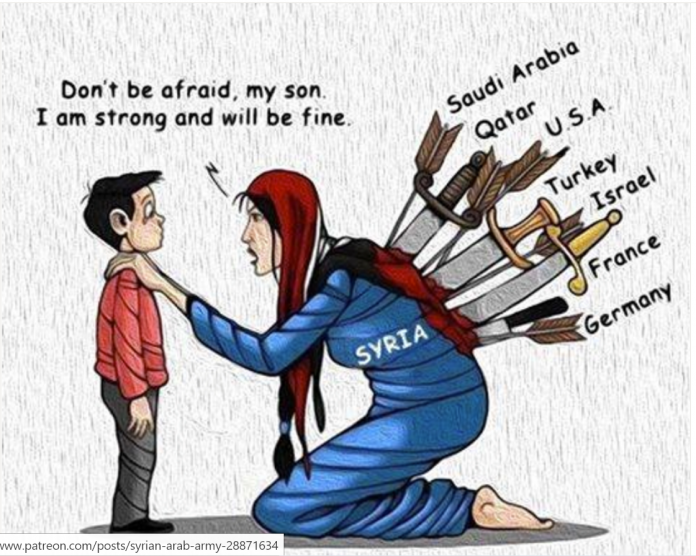 1) That this war was manufactured by the US and allies for regime change using terrorist proxy militants; and

2) The Syrian government did not use chemical weapons against civilians.

… are typically accused of many things including being “traitors” to  our home countries, Russian trolls and bots, “Assad apologists” (I  personally am a President Assad supporter – not an apologist), whackos,  and of course, conspiracy theorists.

But here is a short list of  people – who may be considered “more credible” than we independent or  citizen journalists, social-media activists, and alternate media  watchers – saying things along the same lines as we all  have been. I’ve  added just one reference for each though several on this list have  written or spoken extensively on the conflict. By the way, this list is  not all inclusive, there are many I’m sure I’ve missed. Also putting  them on this list DOES NOT mean that I support everything each and every  one has ever said, done, or written!

General Wesley Clark –  former Supreme Commander of NATO Forces in Europe. In 2007 he revealed  that immediately after 9/11 the US planned to ‘take out’ 7 countries in 5  years – none of which was involved in 9/11 including Syria. https://www.youtube.com/watch?v=B3B5xzApMZg

Colonel Lawrence Wilkerson – former Special Forces and former Chief of  Staff for General Colin Powell while he was Secretary of State. When  asked if Assad used chemical weapons his answer is “bull”. https://www.youtube.com/watch?v=kgig1QVU2lY

Dr. Ron Paul – former surgeon in the USAF, long-time Member of the  House of Representatives and Libertarian presidential candidate. “‘The  Evidence Is Very Clear’: The US Has Aligned Itself with Al-Qaeda in  Syria” https://www.globalresearch.ca/the-evidence-is-very-…/5654541

Philip Giraldi – Formerly in the US Army and a CIA officer of 20 years.  He is Executive Director of the Council for the National Interest.   “Destroying Syria: Why does Washington hate Bashar al-Assad?” http://www.unz.com/pgiraldi/destroying-syria/

John Kiriakou – Former CIA agent turned whistle blower who was  persecuted by the US government for refusing to participate in the CIA  torture program. “Western intel on Douma incident virtually  non-existent, no ground sources”  https://www.rt.com/…/423986-syria-strike-intelligence-war-…/

Colonel Pat Lang – Former head of US Defense Intelligence Agency’s  operations in the Middle East.  “US strikes on Syria based on a lie.” https://gosint.wordpress.com/…/former-dia-colonel-us-strik…/

General Mike Flynn – Former head of the US Defense Intelligence Agency  who stated in interview that the Obama administration had made a willful  decision to use Al Qaeda, the Muslim Brotherhood, and what would be  later called ISIS as assets in Syria. https://www.youtube.com/watch?v=-EghwCDNyiY

US Senator for Kentucky Rand Paul – co-authored with Rep. Tulsi Gabbard  the “Stop Arming Terrorists” bill and been actively pursuing an end to  US involvement in Syria, Yemen, Afghanistan etc. https://www.paul.senate.gov/…/dr-rand-paul-introduces-stop-…

Dennis Kucinich – long-time Member of the House of Representatives and  Democratic presidential candidate who has gone many times to Syria  during the war. “‘Deep state’ elements pushing for Syrian conflict” https://www.rt.com/usa/425457-deep-state-us-syria/

Jack Murphy – Green Beret veteran who was embedded with US troops  ordered to train “moderate rebels” for Syria. He wrote a detailed report  claiming the US was training “the next generation of al Qaeda” and that  US backed “moderate rebels” were acting as supply lines to get weapons  to al Qaeda. “US Special Forces sabotage White House policy gone  disastrously wrong with covert ops in Syria.”  https://thenewsrep.com/…/us-special-forces-sabotage-white-…/

Peter Ford – former UK Ambassador to Syria. “A Guide to Decoding the Doublespeak on Syria”  https://21stcenturywire.com/…/a-guide-to-decoding-the-dou…/…

Robert Parry – a Pulitzer finalist for his work exposing the Iran-Contra conspiracy. “Echoes of Iraq-WMD Fraud in Syria” https://consortiumnews.com/…/echoes-of-iraq-wmd-fraud-in-s…/

Gareth Porter – Winner of the Martha Gellhorn Prize for Journalism.  “Have We Been Deceived Over Syrian Sarin Attack? Scrutinizing the  Evidence in an Incident Trump Used to Justify Bombing Syria” https://www.alternet.org/…/what-really-happened-khan-sheik…/

John Pilger – Australian journalist and BAFTA award-winning documentary  film maker. Regarding the fake news being reported about the war in  Syria by mainstream media. “Hold the Front Page, the Reporters are  Missing” https://www.counterpunch.org/…/hold-the-front-page-the-rep…/

Stephen Kinzer – American author, journalist and academic. He was a New  York Times correspondent, has published several books, and currently  writes for several newspapers and news agencies. “The media are  misleading the public on Syria” https://www.bostonglobe.com/…/8YB75otYirPzUCnlwa…/story.html

Theodore Postol – professor emeritus of Science, Technology, and  International Security at the Massachusetts Institute of Technology and  is a critic of U.S. government statements about missile defense. He has  also criticized the US government’s analysis of the alleged 2013 Ghouta  and Khan Shaykhun chemical attacks in Syria. “Physical evidence cited by  the White House Report contradicts its own conclusions, according to  MIT’s Professor Ted Postol” https://www.scribd.com/…/Report-by-White-House-Alleging-Pro…