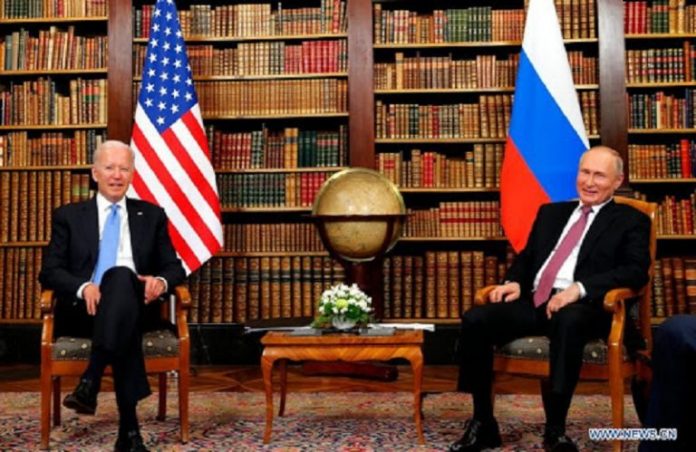 On June 16 in Geneva the US-Russia Summit was defined by President Biden “good, positive” and by President Putin “quite constructive”. Should we, therefore, feel a little reassured in a situation where Europe is at the forefront of what NATO called “the lowest point in our relationship with Russia since the end of the Cold War”? The facts tell us otherwise. At the same time when the US-Russia Summit was underway in Switzerland, the Baltops 50 was underway in the Baltic, one of the 20 major US-NATO military exercises in Europe in 2021.

The Baltops 50 was organized and directed by the US-African naval forces commander with headquarters in Naples-Capodichino, Admiral Robert Burke, who at the same time is head of the NATO Command in Lago Patria (JFC-Naples). From June 6 to 18, over 4,000 soldiers with 40 ships and 60 aircraft – belonging to 18 NATO member and partner countries, including Italy – practiced the air-naval war in the Baltic and surrounding regions”, close to the Russian territory. Warships and bombers with nuclear capability took also part in the maneuver, and for the first time, the new NATO Space Center was integrated into the exercise.

While this big war exercise was underway, clearly directed against Russia, President Putin declared in the press conference after the Summit: “We conduct military exercises within our territory, we do not bring our equipment and personnel close to the borders of the United States of America, as the USA and its partners are now doing near our borders”.

The geographic location of the military forces, especially nuclear ones, is of primary importance: a tactical missile deployed 10,000 km away cannot hit the target but, if deployed at 1,000 km. has the same destructive effect as an ICBM.  The two presidents’ declaration on “strategic stability“, including the extension of the New Start Treaty for the control of nuclear weapons, will be nullified if the US installs new “tactical” nuclear weapons in Europe as it has planned.

This and other key issues have been ignored by the media who according to Washington’s direction used the Summit as a kind of trial with Putin in the dock. The President of the United States is a public minister who did not just answer the questions like Putin, after refusing to hold the traditional joint press conference, but presented his own report on the Summit. According to  Biden, he told Putin how he reacts anytime he sees violations of human rights in Russia and elsewhere: «How could I be the President of the United States of America and not speak out against human rights violations? Defending fundamental freedoms is part of the DNA of our country».

This is solemnly declared by the current President of the United States, the Democrat Joseph Biden who in 2001 supported the war of Republican President Bush in Afghanistan and, in 2002 promoted a bipartisan resolution that authorized President Bush to invade Iraq on charges (later proved false) that it possessed weapons of mass destruction.

This was solemnly declared by Joseph Biden who was one of the architects of the US-NATO wars against Libya and Syria as vice president of the Obama Administration,   he supported Islamic fundamentalist groups to undermine these countries from within, he favored the use of  neo-Nazis in Ukraine for the putsch that opened the new confrontation with Russia. He was one of the architects of the “kill list”, including people from all over the world who were secretly killed because they were judged harmful for the United States (The New York Times, President Obama’s Kill List, May 29, 2012). These wars and covert operations have caused directly and indirectly millions of deaths and the worst human rights violations. However, good feelings are not lacking: in a long official obituary on Twitter (reported in full by Ansa), President Biden announced: “Our hearts are heavy today as we let you know that our beloved German shepherd Champ died peacefully at home”.

Featured image is from news.cn

The Putin-Biden Summit: Is Putin Walking into a Propaganda Trap?

Biden Wants NATO to Project the Strength It Doesn’t Have

16 June 2021The original source of this article is Global Research