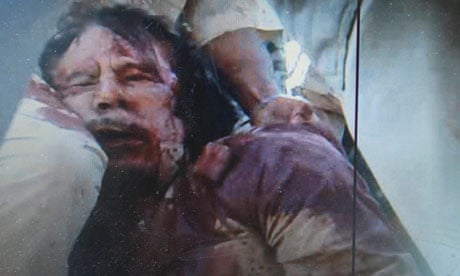 “Human rights” or “democracy” have nothing to do with current wars of conquest except that these words are used as cover to hide institutionalized mass murder and theft. In fact, human rights and democracy are usually the first casualties of any invasion.

The “West”, however, understands the value of these words to sell wars which invariably destroy “non-compliant” secular governments in favour of divisive fundamentalist regimes.

Human lives are superfluous to the overriding imperial agendas. In fact, imperial strategists prefer that target countries become internally divided, even when division exacts a huge toll in innocent lives.

It’s all very illegal, but the West is not overly concerned with international sanctions. The West isn’t particularly perturbed by the consequent rise of fundamentalism either, because it uses fundamentalist proxies such as al Qaeda and ISIS – or neo-Nazis — to globally implement their agendas of destruction.

The pre-planned invasion of Libya is a case in point. Prior to the invasion — ironically billed as a “humanitarian intervention” — Libya’s government, the Libyan Arab Jamahiriya, boasted significant achievements, including the following:

*The highest standard of living in Africa
*Human Development Index (HDI), a measure of health, education, and income, ranked above the regional average
* Free public health care, and free public education
* 89% adult literacy rate (with girls outnumbering boys by 10% in secondary and tertiary education)
* Subsidized, affordable food
* Homelessness all but wiped out

Given these very positive metrics, how did the west sell its so-called “humanitarian intervention? Simple. It created a false narrative that demonized Gadaffi as it promulgated unreasonable, evidence-free fear.

Associate university professor and author, Maximilian C. Forte rebuts the arsenal of lies promulgated by the West in “The Top Ten Myths in the War Against Libya”. Here is the list of evidence-free accusations:

Significantly, the west supports the “rebels” – long-time enemies of Gaddafi – who are basically al-Qaeda/ISIS, the same mercenaries that are currently in Syria.

So, what are the underlying reasons for the destruction of Libya and its people plus the subsequent empowerment of al Qaeda and ISIS terrorists? Dr. Michel Chossudovsky argues in “Operation Libya And The Battle For Oil” that oil is the “Trophy”:

“An invasion of Libya under a humanitarian mandate would serve the same corporate interests as the 2003 invasion and occupation of Iraq. The underlying objective is to take possession of Libya’s oil reserves, destabilize the National Oil Corporation (NOC) and eventually privatize the country’s oil industry, namely transfer the control and ownership of Libya’s oil wealth into foreign hands.

Chossudovsky explains further that looting of Libya’s finances would be another goal:

“The financial stakes as well as “the spoils of war” are extremely high. The military operation is intent upon dismantling Libya’s financial institutions as well as confiscating billions of dollars of Libyan financial assets deposited in Western banks.”

The aftermath of the overthrow of the Jamahiriya-Gaddafi rule has unfolded as expected. Abayomi Azikiwe explains in “Libya War Continues Three Years After Gaddafi Assassination” that there is on-going destabilization, with warring factions battling for control.

Washington and NATO are no doubt pleased. They have weakened a once strong, secular Libya –that was (significantly) a model for other African countries — by imposing their will, to the detriment of humanity, and in favour of Islamic Fundamentalism.

The resulting carnage dims future prospects for countries that strive to break free from parasitical, imperial agendas, even as it empowers proxy armies such as al-Qaeda and ISIS.

Washington’s stated goal of conducting a “war on terror” is actually a “war for terror” that is responsible for the slaughter of multitudes, all beneath the false veneer of humanism, freedom, democracy, or any number of other lies.

This article first appeared on Whatsupic