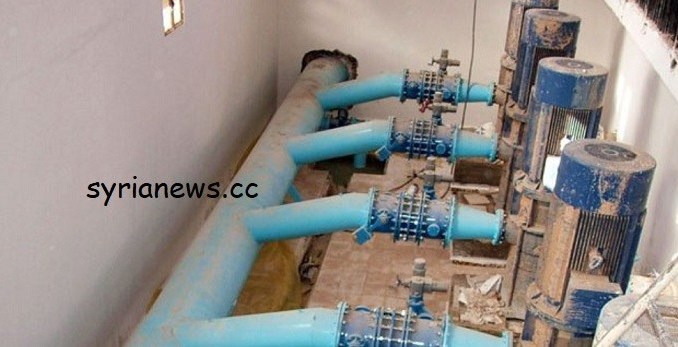 Madman Erdogan thug mercenaries have followed up on yesterday’s criminal destruction of the Zeyzoun thermal cooling tower in Idlib countryside by again cutting off the Alouk water plant that supplies drinking water to civilians in Hasakah.

This is part of Turkey’s ongoing plot to Israelize regions of Syria: Ethnic cleansing of indigenous Syrians via destruction of essential infrastructure, followed by settling these areas with radical human terrorists and their families brought from other parts of Syria and from the rest of the world.

The Turkish Madman Erdogan has recently had problems with fratricide and fragging, among his greedy factions of criminally deranged, Captagon-fueled, greedy killers for hire.

The Syrian government has announced the return to its back up plan to use water tankers to bring supplies to the Hasakah region should the Madman continue to engage in this ongoing war crime.

Syria News again reminds our readers that unindicted war criminal Madman Erdogan remains the darling of the NATO klansmen mobsters ruling the United Nations, no other multi-faced higher commander of tens of thousands of terrorists can fit his place.

Erdogan began the ethnic cleansing/forced displacement — a war crime — against this region of Syria in early October 2019, when his jets bombed the electrical grid of the Alouk Plant in Ras al Ayn, from the skies, while his on the ground vermin bombed with ground-to-ground missiles.

Government authorities immediately repaired the grid, and one day later, Madman Erdogan re-bombed. That repairs were made by Syria’s electricity army, with the help of the Syrian Arab Red Crescent, were of no concern to the mafioso clique running the UN, at the anti-Syria circle-jerk of 24 October. Instead, Ass. Secretary-General for Humanitarian Affairs & Deputy Emergency Relief Coordinator Ursula Mueller emitted noxious fumes normalizing Madman Erdogan regime terrorists in Syria as “allied non-State armed groups” who somehow destroyed part of the Allouk Power Plant infrastructure, much of which had been repaired by a fairy godmother of some UN NATO klansman.

In none of the anti-Syria UN-sponsored propaganda emergency meetings, has any NATO P3 member complained about the ongoing water war crimes of their darling Madman, Erdogan. Since his occupation of the region, the unindicted war criminal has sadistically controlled the Alouk faucets.

Declassified DIA report admitted that the USA attempted to use the British created Muslim Brotherhood to destroy Syria (PDF)in the late ’70s and early ’80s, but that it was another waste of American tax dollars.

At this writing, NATO-run UN has remained silent, and NATO stenography journalists have not condemned Madman Erdogan for his latest deprivation of water to Syrians in the northeastern province of Hasakah.

COVID-19 Has Not Slowed Trump, Erdogan Regime Crimes in Syria