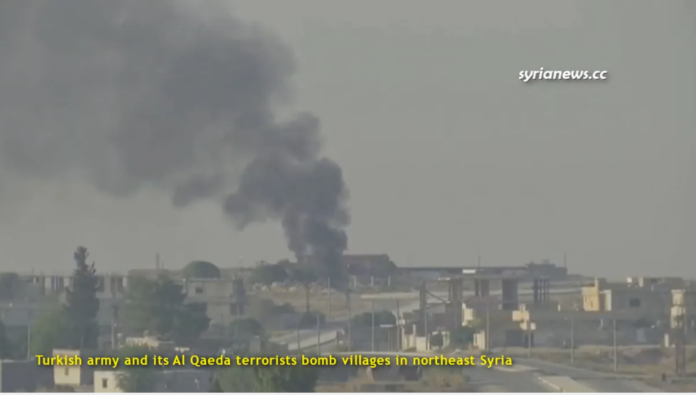 NATO and its proxy terrorist groups continue to terrorize Syrian civilians in the regions under their occupation in northern Syria, yesterday’s attacks against villages in the countryside of Deir Ezzor and Hassakah are part of the systematic aggression led by the USA and its proxies to Israelize more Syrian land.

The Turkish army, NATO’s second-largest army, along with its affiliated Al Qaeda assorted terrorist groups bombed a number of villages in the Tal Tamr and Abu Rasin regions of Hasakah northwestern countryside while the US-sponsored Kurdish SDF separatist terrorists were storming the village of Bariha in the eastern countryside of Deir Ezzor and kidnapping several villagers.

Syrian Al Ikhbariya news channel covered the above atrocities in its following report:

Armed groups of the Kurdish SDF militia, backed by military vehicles of the American occupation, raided the village of Bariha (Al Busayrah region) in the eastern countryside of Deir Ezzor and stormed a number of houses, during which they kidnapped a number of the villagers and took them handcuffed to an unknown destination.

The sources pointed out that the raid was accompanied by the firing of bursts of machine guns, which caused a state of panic among the villagers.

Local sources stated that the (NATO 2nd largest army) Turkish occupation forces and terrorist groups affiliated with it violently bombed with artillery shells the homes and properties of citizens in the villages of Tal al-Ward and Khirbet al-Shaer, south of Abu Rasin district in the northwestern countryside of Hasaka.

The sources also indicated that the Turkish aggression extended to the villages of Al-Banajah, Al-Dardara, Umm Al-Kif, and Al-Taweelah in the northern countryside of Tal Tamr and that some electrical network lines were damaged as a result of this bombing.

End of the transcript.