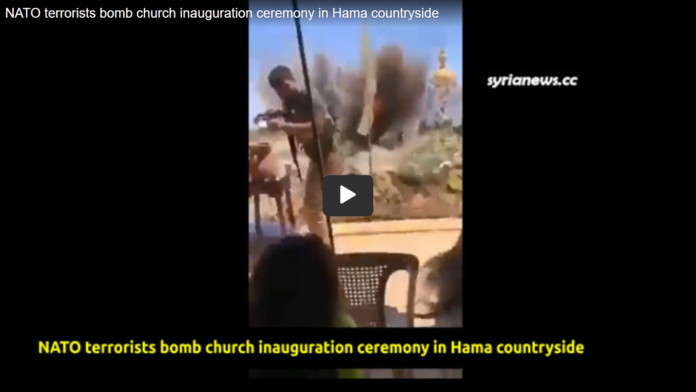 NATO loitering drones murdered two Syrians and wounded twelve others attending the inauguration of the Aya Sophia Church in Suqaylabiyah City, Hama governate, Syria. The drones (one, or two, according to different sources) were jammed with explosives, meant to do the most damage to the church and to the Christians in attendance.

Al Suqaylabiyah is a predominately Greek Orthodox Christian city that has seen several massacres since the launch of the March 2011 NATO Spring against the indigenous citizenry of the Syrian Arab Republic, by the “freedom-loving,” mostly foreign, Wahhabi takfiri terrorists. The Aya Sophia Church is part of the Syrian Greek Orthodox community.

The video is also on YouTube, BitChute, and Rumble.

Just hours before the drone bombing of the Suqaylabiyah gathering, the “town of Abu Rasin and the villages of Rubayat, Matmoura, Umm Haramleh, and Dada Abdal came under heavy indiscriminate shelling in the early hours of dawn today, Sunday 24 July.” These war crimes by NATO Erdogan’s criminal Turkish occupiers and various mercenary and militia gangs, came “fresh from the Tehran Summit,” once again demonstrating that all fingers must be counted after shaking hands with the treacherous caliph wannabe.

The NATO drone(s) came from the Erdogan criminally occupied area of terrorists-controlled Idlib, which on 22 July, had bombed the area with four grad missiles, in what independent investigative journalist Vanessa Beeley presciently described as an “[a]ttempt to prevent Aya Sophia opening ceremony Sunday.”

Beeley was in attendance for the ceremony, and we share several of her videos, photographs, and tweets.

Almost twenty-four hours after the most recent, deadly, war crime against the Syrian people, this author notes that not a single NATO-affiliated medium has reported on the deaths and injuries from terrorists’ explosives at the Aya Sophia church ceremony — nor has any member of the NATO junta ruling the United Nations uttered a single word of condolence, including the esteemed Secretary-General, Antonio Guterres.

Syria News is a collaborative effort by two authors only, we end up most of the months paying from our pockets to maintain the site’s presence online, if you like our work and want us to remain online you can help by chipping in a couple of Euros/ Dollars or any other currency so we can meet our site’s costs on time; you can also donate with Cryptocurrencies through our donate page.
Thank you in advance.

READ MORE: As Suqaylabiyah: The Syrian Christian Town Near Idlib the West Has Never Heard Of/ Vanessa Beeley reports from the town of As Suqaylabiyah, Syria – a Christian enclave under attack from Al Qaeda affiliated militants in the nearby Idlib province. /June 07, 2019