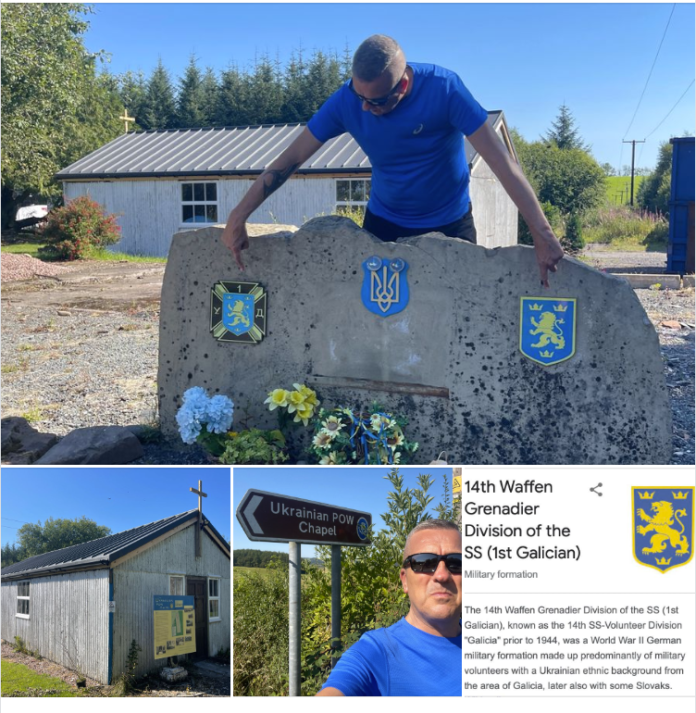 August 23 at 2:08 PM  ·
As the war continues in Ukraine, people think that because President Zelensky is Jewish that there can’t possibly be any Nazis in Ukraine.
Since President Putin launched his operation into Ukraine on February 24th I’ve lost count of the amount of people saying ‘Oh, my grandfather is Ukrainian’. Well next time you hear someone say this you might well want to ask them what their grandfather did in the war.
Pull up a seat and let me explain further…
In Ukraine they had the 14th Waffen Grenadier Division of the SS (1st Galician) who fought on the side of the Germans in what we know as World War 2. Many of those Ukrainians who fought with this SS division were captured and brought to the UK. They were held at Hallmuir Ukrainian POW Camp in Lockerbie, Scotland.
On the 27th May 1947 10,000 Ukrainian POW’s arrived at Glasgow Docks of which around 450 were held prisoner in 40 huts and one was used as a chapel.
The chapel still remains today along with a couple of remaining huts, and at the entrance you can see the sign of that very same 14th Waffen Grenadier Division of the SS (1st Galician). Nazi slogans mark the entrance to the building.
Because the Ukrainians had fought for the Germans, they would be most likely shot when they came home so at the end of the war, they were allowed to remain in Great Britain.
Last week I made the 470 mile round trip to Scotland and go and see this for myself.
So next time you hear someone say ‘Oh, my grandfather is Ukrainian’ you might well want to ask them what their grandfather actually did in the war because it’s highly likely that he fought with the Nazi SS.
Strange how we’re being told to be aware of the ‘Russians’ yet we totally ignore the Nazi war criminals living amongst us here in the UK. Go figure.