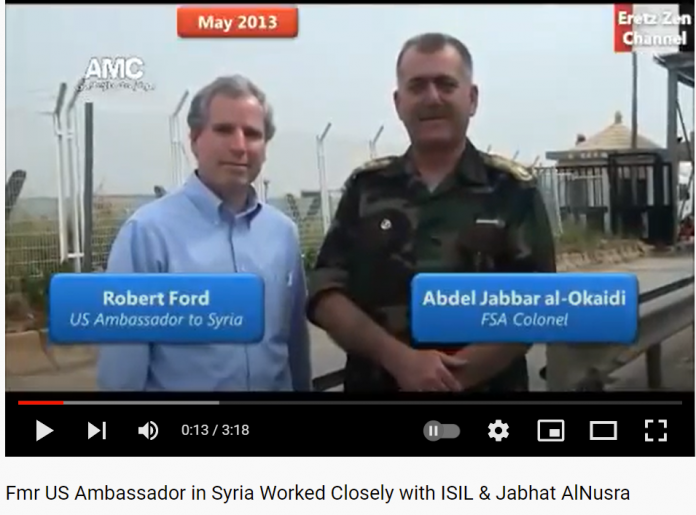 Watch as the New York Times and Western media try to re-write the history of the war on Syria.

Washington’s recent admission of bombing civilians is a “limited hangout”. The West’s entire involvement in the war consists of Supreme International War Crimes. The Western “coalition” is responsible for the entire war and all its atrocities.

If there was international justice, the criminals would be tried and hanged. — Mark Taliano

· The former US ambassador to Syria Robert Ford said:

Despite the destruction of the Syrian economy, in the end, president Bashar Al-Assad won the war

The US policy has failed to establish a Syrian government through negotiations,” in addition to failing to unite the so-called the Syrian “opposition” groups.

There are many divisions between the “opposition” groups, which were present since the beginning, contributing to the US’ failure in achieving its interests.

The United States bears responsibility for what happened in Syria because we armed “opposition” groups.

We armed [“opposition”] groups open to finding solutions through negotiations.”

Arab countries such as the UAE, Egypt and Jordan have recognized the authority of the Syrian government, acknowledging that it is ‘here to stay’ and that Arab countries will have to find a way to coexist with it.

While no US politician encourages restoring diplomatic relations with Damascus, the US’ circumstances are different when it comes to Syria’s Arab neighbors.

Washington is unhappy with the Arab efforts to coexist with Damascus,” and it is unable to offer an alternative to these offers.

Ford’s remarks came during an interview with France 24.

Before the West’s War of Aggression against Syria, Syria was...